I finally have a scanner of my very own, which means I can finally send Chris Sims the Daft Punksmas present I made for him! Happy holidays, everyone! 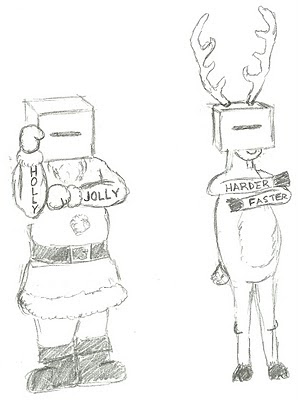 If reading various Twitter feeds is any indication, I'm in disagreement with a great many comic fans about quite a few things. I've been making a little mental list of these differences in geek opinion, presented for you here:

There, that'll do for now. I might as well wait for them to come take my comic blogging license away. I wasn't using it anyway.
Posted by Tom Foss at 10:45 PM 7 comments:

You know, if I had the Infinity Gauntlet, I could just make this happen

I haven't finished playing "Marvel: Ultimate Alliance 2" yet (though sadly, what I heard while making my way through the War Rocket Ajax archives doesn't bode well for the rest of it), but I'd like to make a suggestion for the next game in the series:

Seriously, has there ever been a more video game friendly plot device than the Infinity Gauntlet? It's a boss battle MacGuffin and a fetch quest all rolled up into the same object! Granted, the Infinity Gems are a bit '90s, and some of the plot points would likely be fairly similar to the last Infinity Gem-based Marvel game, but I think centering the plot around the Infinity Gauntlet would solve a lot of the issues that this game has had. For instance:

The other big thing that I'd like to see return is the character-specific training missions. Granted, some of them were frustrating, and some were nonsensical, but I'd much rather blindly fight my way through AIM headquarters as Daredevil than escort some random prisoner through random corridors in a stealth mission in a game which lends itself neither to stealth nor escort.

Now that I finally have a weekend, I may try to finish the game. In the meantime, feel free to add your thoughts in the comments!
Posted by Tom Foss at 11:10 PM 2 comments:

"December" with the Doctor: Last-Minute Speculation

With "The End of Time: Part 2" approaching fast, there's not much time left for me to do some wild mass guessing about the end of the Tennant/Davies era. Spoilers ahoy!

1. To be fair, io9 takes a pretty skeptical approach to the rumor, but it's also the place everyone seems to be using as a source for the claim.

2. Admire my restraint, that I didn't say "Happy Who Year!"