Some thoughts on Doctor Who

I've been on a big Doctor Who kick since a little before the 50th anniversary special. It's been slightly obsessive, to be honest. So I figured I'd do something productive (sort of) with it and pop out another bulleted list of incoherent thoughts. Spoilers ahead for things that have been out for months now.
Wow, somehow I wrote all that and didn't even get into my classic Who binge or the ebooks and comics I've been consuming. I guess I'll have to write up a part 2...
Posted by Tom Foss at 9:36 PM 1 comment:

From "Absolute Power," the 47th episode of "Superman: The Animated Series." 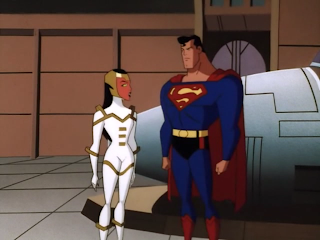 CETEA: We may have our wars and our factions, but we are not the barbarians Jax-Ur portrayed.

SUPERMAN: Even so, I can't fight him, Cetea.

CETEA: You must! You're the only one powerful enough.

SUPERMAN: If I do, your planet will be the loser. A battle between us would cause more destruction and bloodshed than all the wars that came before.

CETEA: We're willing to risk it.

SUPERMAN: I'm not. Not that way.