This story is a little interesting in that it was originally published online, which was fairly rare for mainstream comics a decade ago. First available in print in 2009's DC Universe: Origins, this is part of the same series that ran as backup features in 52, Countdown, and...ugh, Justice League: Cry for Justice. Here's "The Origin of Superman"! 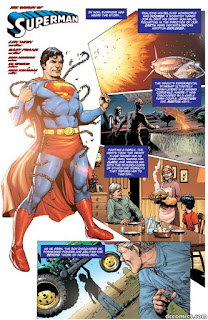 Key Elements: Kryptonian scientist Jor-El sent his infant son Kal-El into space to escape their doomed homeworld. The rocket landed in Kansas and was discovered by farmers Jonathan and Martha Kent, who adopted the child and named him Clark. They raised him to have a strong moral fiber, and he grew to develop additional strengths and abilities far beyond those of normal humans. As an adult, he lives as a mild-mannered reporter for a major Metropolitan newspaper and fights a never-ending battle for truth and justice as Superman!

Interesting Deviations: As we've seen a couple of times now, this origin opens with a little bit of commentary. I'll be keeping an eye out throughout this series to see just when the "people have asked us about Superman's origins" give way to "you've all heard this story before" captions like the one here. 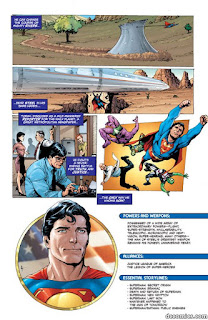 I appreciate the emphasis placed here on Clark's upbringing being the source of his moral character. A lot of the narration is familiar, from the radio show opening, but it eschews the "faster than a speeding bullet" section in favor of the slightly-less-commonly-referenced "change the course of mighty rivers" section.

It's also interesting to note that Lara isn't mentioned at all, and while we see a shot of Perry, Lois, and Jimmy—similar to ones that have shown up elsewhere, like in The Amazing World of Superman and Superman #146—they aren't named on-panel.

Additional Commentary: It's a short one, folks, so there's not a lot to say. It'll be interesting to compare and contrast this with what we see in Superman: Secret Origin, which Frank also drew, and which came out around the same time (I can't pin down what came first; the first issue of Secret Origin came out in November, 2009, and the DC Universe: Origins TPB was printed in February, 2010, but the origin here was available online earlier than that). The bit about classic stories and powers is neat, though. Very Who's Who.

The Rocket: It's very similar to the one we'll see in Secret Origin, save for some differences in coloring that may be down to how the lighting is supposed to look in this panel. Regardless, it's got these weird bug eyes, and I don't know why? It's distinctive, but not in a good way. One exploding Krypton.