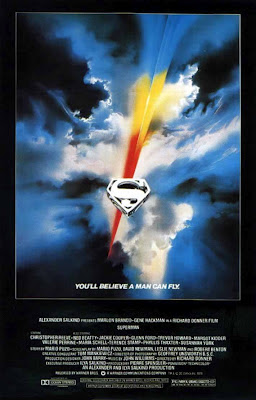 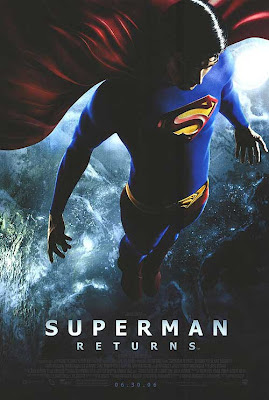 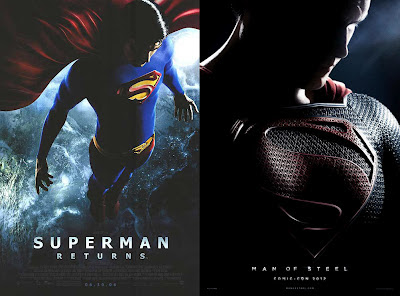 So, um, something really dangerous happening down and to the right, there, Superman?
Posted by Tom Foss at 9:21 AM 1 comment:

I've realized recently that a lot of the problems I have with modern comics have the same genesis. I know I've done a bunch of reading of (and listening to) folks like Chris Sims and David Brothers, and that's influenced a lot of this, but I haven't been careful enough to document links or anything. So I apologize if I'm referencing other people's ideas without linking attribution, and if anyone wants to point out where some of these thoughts have originated, I'll be happy to add in the links.

That's assuming anyone still reads this blog, of course.

Anyway, it's clear that a lot of comics writers these days, mostly (inasmuch as I notice it) at DC have this weird sense of shame and embarrassment regarding comics of the past. Unfortunately, this seems to be tied into an overbearing sense of nostalgia, and desire to have comics be like they were back in that past.

And so there's this tendency to tell stories that attempt to justify those comics from the past, to show that they weren't just kids' stuff, that they're just as mature and nuanced and adult as comics are/can be today.

The way they accomplish this is by showing that there was stuff going on behind the scenes in those comics--mature stuff, grown-up stuff, not that silly four-color kiddie nonsense, no way. And so we get "Identity Crisis," showing that behind the simple stories of the '70s League, there were secrets and conspiracies and conflicts and rape. We get "Countdown to Infinite Crisis" which does much the same thing to the Bwa-Ha-Ha JLI era. We get "Flash: Rebirth," showing us that behind silly stick-in-the-mud Barry Allen was his mom's tragic death, that even his goofy outdated bowtie had an origin. We get Geoff Johns' "Aquaman," where people confront the character with comments taken directly from real-world message boards (which make no sense in the context of the New 52 DCU) and he shows that, no, Aquaman is totally badass.

And we get "Justice League," which makes the whole thing almost literal. Most of the action in "Justice League" happens off-panel, giving the reader a behind-the-scenes view instead. We've seen, from the hints here and there, that the familiar Justice League battles seem to all be happening--they've fought Starro and Amazo and the Key and so forth--but in our behind-the-scenes look, we see that the League is not a coalition of Super Friends, but a loose organization of powerful people who mostly can't stand each other, being coordinated by a put-upon government agent trying desperately to keep up their public façade of being chums.

And in their second storyline, their main villain is the guy who chronicled their first adventures, trying to show the world the "truth" about the League. Presumably, that truth is that they're a bunch of jerks who don't actually work well together.

It's all so...tabloid. Hence "exposé comics"--comics designed to publicize the seemy background behind what otherwise seem like innocuous, innocent events.

They're not new, really. Martin Pasko's Internet-infamous "Superman" (vol. 1) #330 is the same kind of thing, trying to show that something silly has a totally reasonable explanation. It's also not something that can't be done well; I'd argue that Mark Waid's "JLA: Year One" is kind of like this as well, fleshing out the characters (and doing a bit of retconning) between the scenes, adding in new conflicts and so forth. But there's no rape there, no murder, none of those cheap, tawdry plot devices that modern comics writers see as shortcuts to "mature" storytelling.

No, those come from the ur-example, Alan Moore's "Watchmen." "Watchmen" is the exposé comic, giving us a world where there are two ages of heroes. One seems simple and colorful and bright and optimistic, the other more dingy with shades of gray. But, we discover, that bright and optimistic era wasn't actually so. We learn, through flashbacks and Hollis Mason's exposé autobiography, that the "heroes" were flawed people with serious conflicts and--hey presto!--rape.

And so it seems like the lesson that Dan Didio and Brad Meltzer and Geoff Johns took from "Watchmen" is that the bright, four-colored comics of the past were unrealistic, and that lack of realism is something shameful and embarrassing. The way to make it more realistic was to expose the seedy background of interpersonal conflict and damaged people and murder and rape, and that would justify its existence, would validate their fandom and nostalgia, and would make the whole effort worthwhile.

"Watchmen" is a great book. I've read it multiple times. I've liked it every time. I'm getting to the point where I wish it was never written, where we could wipe it from history, rather than spend the rest of eternity trying to emulate it.

Superheroes are silly. There's no escaping that silliness. Slathering rape and murder on top of it only makes it silly in a more disgusting way, and makes the slatherer look silly for thinking that rape and murder, rather than depth and quality, are what make something "mature." I'd like to see DC Comics wake the hell up and embrace some of that silliness again. I'd like to see the sort of things we're getting from Marvel--the Pet Avengers, Atlantean hillbillies, "what if the Hulk had a Hulk?"--at DC again.

Okay, a month without posting. Sorry about that. To make up for it, here are some things I've been thinking about recently.
Most of my free time right now has been devoted to Mass Effect 3 (except what's been devoted to watching the Olympics), and I'm right up against the last mission. It's actually timed really well, since I have to start working on stuff for work soon. The only thing keeping me from marathoning my way through it right now is that BioWare announced a new single-player DLC mission coming later in the summer, and I'm not sure I want to try beating the game twice. If I knew when Leviathan was slated to hit, I could make a more informed decision. Arrrgh. First world problems, I guess.
I finally managed to get "Love and Capes" vol. 3 recently, and I've been working my way through it today. It's fantastic as always, and touches on some oddly familiar territory with its real estate subplot, since my wife and I recently bought a house. I got to wondering if Thom Zahler would be willing to do a Superman book if DC offered one, but realized it just wouldn't be the same without the Lois & Clark marriage (or at this point, even a relationship). That led me to think that, like Tom Beland, he could do a great Spider-Man story...except Spider-Man isn't married anymore either.

Which got me thinking about married couples in comics, and...holy crap, there aren't many left, are there? The New 52 broke up everyone but Aquaman & Mera and Animal Man & Ellen Baker. Marvel has Reed & Sue Richards, Crystal & Ronan the Accuser, and the newly-married Northstar & Kyle Jinadu. From what I understand, even Storm & Black Panther are splitsville. Five married superhero couples in the entirety of the Big Two? That's pretty sad. It's getting to be that spouses are as absent in superhero comics as parents.
I really enjoyed "Action Comics" (vol. 2) #12, but I think it's super-weird that New 52 Captain Comet has Conduit's origin.
I'm going to check out the zero issue, but it looks like "Superboy" is going to be the first Superman-family book that I've dropped since "Superman/Batman." Superboy is a cipher, and the tie-ins with Teen Titans and so forth have left him without anything even resembling a supporting cast. I don't feel any connection with him as a character, largely because he has no real personality, and I have pretty much zero desire to read about whether or not he's going to be a hero. He's got an S-shield on his chest (and now, his bicep), of course he's going to be a hero. The fish-out-of-water naïveté is being done much better over in Supergirl, and she's actually got a story going on. Superboy is treading water, and much as I like Tom DeFalco, I don't think he's going to improve much on that.

But I'll give the zero issue a shot. It's only fair. I mean, he wrote Spider-Girl, right?
I really ought to watch "Superman vs. The Elite" one of these days. "All-Star Superman" too, for that matter. And "Justice League: Doom." The list of movies I've not watched because I've been playing Mass Effect all summer is rapidly increasing.
That's good enough for now, right? I've got some thoughts on digital comics I should write up soon. Maybe I'll do that this week.
Posted by Tom Foss at 9:11 PM No comments: