There are a few posts I'm working on, but I'm not sure when I'll be done with them. In the meantime, Graeme McMillan over at io9 has put together a list of 75 Books You Should Own for DC Comics' 75th Anniversary. In the spirit of various "which books have you read" memes, I'm just going to run-down the list with occasional brief commentary. The ones in bold are the ones I own.

Overall, it's a pretty good list. I think I'd argue for the inclusion of JLA: Tower of Babel and Superman For All Seasons, and I suspect that some people would quibble over whose Hellblazer to include, but in general it's pretty comprehensive.
Posted by Tom Foss at 8:55 PM 3 comments:

Man, that was amazing.

I've finally been getting around to watching these Direct-to-DVD films, and I've been pretty impressed. "Green Lantern: First Flight" was good, "Wonder Woman" was loads of fun, and I even branched out and watched "Hulk vs. Thor," which was probably the best non-"Spectacular Spider-Man" animated Marvel thing I've ever seen. As it stands, the only DC animated films I haven't watched yet are "Superman/Batman: Public Enemies," which I'm not particularly excited about, and "Justice League: New Frontier," which I don't want to watch until I have the chance to re-read the story. Especially since I have this snazzy Absolute Edition.

But I haven't looked forward to any of these films as much as "Justice League: Crisis on Two Earths," which stands as the only one I've actually bothered to pre-order. I was not disappointed. I don't feel like I could be superlative enough in describing it or running through the plot or going over how much I enjoyed the fight scenes and the plot and the little fanservice bits. Like, who Superwoman turned out to be the counterpart of? Totally brilliant.

So rather than gush, I'm going to praise the flick a different way, by going over all its faults. I think you'll see my point.

That's it. That's the complete list of problems I had with "JL:Co2E." It was a pretty awesome movie.

And "The Spectre" was similarly awesome. I especially liked the '70s cop movie flair to it, complete with washed-out visuals. I think it really added to the kind of EC-style horror that the story seemed to be going for. I can't wait to find out what the next one will be...wasn't "Jonah Hex" rumored at some point?

Anyone know if it's still canon that Peter Parker's parents were government secret agents who were killed by the Red Skull? Because that doesn't get mentioned enough.

Seriously, Peter works with Nick Fury often enough that it'd be interesting to see Nick trying to groom Peter into a spy like his parents.
Posted by Tom Foss at 11:45 PM No comments:

In which I make the obvious joke

So, Mark Millar is doing some kind of promotion offering free advertising to shops that display this moderately profane, fairly kid-unfriendly poster in their stores, because that's surely what we should be encouraging. Having read the first two issues of Kick-Ass, I have to wonder: 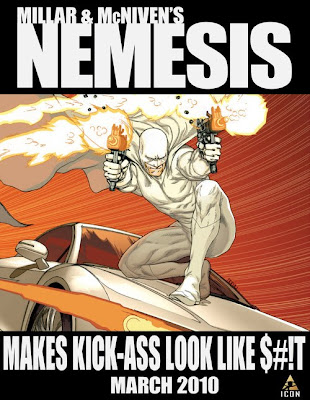 The other big Superman news

Apparently, Christopher Nolan is helping mentor the next Superman movie. Now, I'm still among the three people who really liked "Superman Returns," and I'm a little disappointed to have a reboot, but I can accept "SR" as a coda to the Donner/Reeve universe if it means having a Nolan-quality flick in the near future (and hopefully a Justice League movie thereafter).

Overall, this can only be good news for Superman, because I can't think of anyone I'd blindly trust with a superhero film more than Christopher Nolan. A movie like "The Dark Knight" gets you a lot of capital in my book. It also gives me hope that the "darker/edgier" talk that keeps getting bandied about the Superman films won't be handled in the wrong way, since those are words I don't think associate well with Superman.

I think it's way too early to speculate on plot or theme or tone, but I think they'd do well to take some hints from All-Star Superman (address the origin quickly, if at all; stick to big sweeping events and grand ideas). Obviously, it's going to need a little bit more conventional superhero action. To that end, I've been thinking that you could build a whole movie around Luthor and Metallo as the villains, while setting things up for an eventual sequel with a Johns-esque Brainiac. I don't think it's controversial to say that the biggest problem with Superman movies has been their general aversion to typical superhero stories, and I trust a Nolan-helmed team to understand that.

Regardless, I'm excited, and I hope this all pans out. The DC movieverse(s) shouldn't be without the Man of Steel.
Posted by Tom Foss at 5:00 PM 2 comments:

I've got about 75% of a big post on the "New Krypton" storyline finished and percolating, but I haven't had time to work on it recently. I have, however, had time to read about the upcoming "War of the Supermen," which will apparently be over in less than two hours.

I'm actually not sure what to make of this, but I suspect that it'll mean a liberal application of Phantom Zone projectors or Kryptonite or Coluan shrinking technology. I'd actually really like New Krypton to stick around, to stay in Earth's solar system and continue causing drama for the El family, rather than getting put back in the bottle one way or another.

The most interesting possibility for this short war, I think--the one that opens up the most new story options--is also the least likely, in my estimation. But a 100-minute war against thousands of people who have all of Superman's powers doesn't sound like a victory for the squishy people of Kleenex who are occasionally punctuated by spandex-clad metahumans--especially with Batman missing. The War of Supermen could end in a Kryptonian victory.

Despite the possible cries of "OMG U GUYS R RIPPIN OFF DARK REIGN," I think this could really open up some really awesome story possibilities: the Kryptonian occupation and apartheid; a resistance movement led by Superman and Batman--or better yet, a resistance movement led by the returned Batman, whose partial goal is to rescue Superman from the Phantom Zone--secretly fighting against the Kryptonian regime; Krypton's drive to increase their empire; the uneasy alliance between Earth's heroes and villains; Zod triumphant; Lex Luthor's time to shine...the opportunities are endless.

Why is it unlikely? Well, first, it would necessarily impact nearly every DC Comic in a major way, suddenly thrusting everything from "Batman and Robin" to "Secret Six" into a world under the thumb of alien dictators. Besides that, it doesn't really fit into the whole "Brightest Day" motif of the coming year. It would also mean that the story would have to be more finite, I think, than otherwise might be necessary (I'm still hoping for a semi-permanent New Krypton in the DCU).

It'd be a nice change of status quo, and it'd remove a lot of the problems I have with Zod, although the story so far has done quite a bit of that as well. I doubt that it'll happen, but I'd be pretty excited if it did.
Posted by Tom Foss at 10:02 PM No comments: