It's all Superman's fault

Oh, sure, we've got a Superman or three running amok in the DCU now, possibly killing Martians and opening huge spacetime rifts and replacing themselves with robots and the like, but Superman's done worse. Lots worse. Like "starting the whole Infinite Crisis" worse.

Don't believe me? Read on. 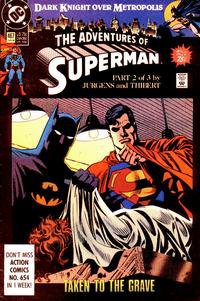 It starts way back in one of the early post-Crisis Superman/Batman team-ups, in which the two heroes are investigating a series of deaths related to Luthor's stolen Kryptonite ring, and a woman who had figured out Clark's secret identity. At the end of the story, Superman gave Batman the Kryptonite ring, in case he ever went rogue or otherwise needed to be stopped. He entrusted Batman with his life, knowing that Batman could stop him if necessary.

This, naturally, sets the Bat-ball rolling. After all, if Batman can be trusted with Superman's life, then who couldn't trust him? He's unimpeachable. It also gives Batman the notion of contingency plans against superheroes. Superman places that first contingency plan, the first "Tower of Babel," the first "Brother Mk. I" into Batman's hand!

But, you say, he's Superman, what are the chances that Batman would ever need to use that plan? 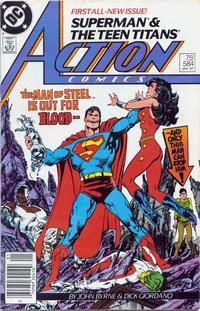 Then, you remember all the times Superman has gone off the deep end. There was the crippled kid who bodyswapped with him and attacked the Teen Titans, there was the time Luthor took control of his superpowers and cut a swath of destruction through Metropolis, there was the time he started moonlighting as Gangbuster because he had a mental breakdown after fights with Brainiac and killing those Kryptonian criminals, the time the Eradicator tried to make him into the perfect Kryptonian, there was the time Eclipso took control of him, and there was the Cyborg Superman who destroyed Coast City (not Supes himself, sure, but a guy with his powers and then some, who did quite a bit to tarnish his image, during "Reign of the Supermen"), then his powers went out of control and he got huge and grotesque and knocked satellites out of the sky, then Brainiac took over his body and put his mind in the head of an epileptic fan in an asylum while he tried to take over the world, then his powers went screwy and he turned blue (not exactly berserk, but he caused some damage and nearly killed the Parasite), then Dominus used him to try to take over the world, then Lord Satanus took his soul and made him act like a jerk, then he and Bizarro swapped bodies, then there was Eclipso (again), which brings us right up to "Sacrifice" and Max Lord, the latest in a long line of people to send big blue off the deep end. And that's just in his own title, not counting all the other books Superman appears in (cough cough "Hush" cough). Is there anyone in the DCU at this point who hasn't taken control of Superman at one point or another? I know I've mentally possessed his body on two nonconsecutive occasions, and had a fantastic time of it.

Superman's life must be a lot like "Being John Malkovich" with a cape. 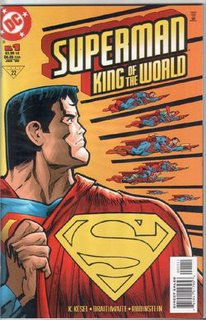 And in some of these occasions (though not as many as you'd think), Batman has had the opportunity to use his Kryptonite ring. I can remember two such occasions. Once, in "Hush," when Poison freaking Ivy took control of Superman, the ring worked with some success, mainly because Superman was fighting Ivy's control. The other time, during the "King of the World" arc, where Dominus used Superman to take over the world, the ring didn't work at all, because Lex Luthor had stolen it and replaced it with a fake.
So, imagine that you're Batman. One of the most powerful beings on the planet has taken over the world with a constant surveillance network enforced by an army of nigh-indestructible super-robots. You and the other most powerful beings on the planet have tried to reason with him, failing. An assault has failed, and your one sure failsafe against just such an event has failed miserably. After you realize the pressing need for more bat-undergarments, your first thought is "gee, next time I should have a better back-up plan." 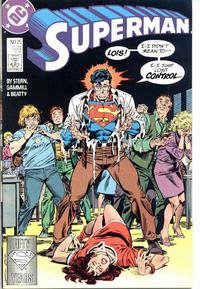 Wait, worldwide surveillance network enforced by super-powerful robots? Superman's not only giving Batman ideas, he's giving them to Max Lord too! And, lest we forget, one of those super-robots went on to kill Donna Troy, setting the stage for her further descent into confusing continuity jumbles and her eventual charge to stop the Rann-Thanagar War, or something.

After Superman's weekly rampages and that whole Parallax fiasco, is it any wonder that Batman's a little paranoid about superheroes? In a universe where a rogue D-stringer like Hank Hall can be a serious threat to all of reality (twice), it only seems prudent to keep tabs on the most powerful, and thus dangerous, members of society.

Anyone else remeber the last time the Giffen-era Justice League got trounced this much? Yep, the "Death of Superman" storyline. Comatose Beetle (seems like Beetle was comatose way too often), Booster Gold's suit destroyed, Martian Manhunter all sorts of screwed up, etc. Anyone remember when Superman came in and took control of the League away from Max Lord? Think that might have ticked him off a little? 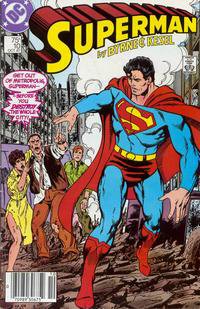 So, Superman originated Batman's anti-rogue-superhero contingency plans, then gave Batman dozens of reasons to use them, came up with the first huge worldwide surveillance network for the "greater good," gave Max Lord the idea and motive to walk into his brain through the back door, and the concept of super-robots to augment the surveillance system. Superman's actions even resulted in the death of Donna Troy. Cite the Satellite-era league and "Identity Crisis" all you want, go after DiDio and Rucka and Johns, but they're not the real culprits. It's all Superman's fault.

Dang, dude. If you'd bother to read those issues, you'd know there was a perfectly reasonable explanation for all of those covers.

I'm sure that the latest Crisis will leave us with a character that's just Hunky Dorey.

I would not call Dominus a "perfectly reasonable explanation." Dominus was a terrible character whose plotline dragged on way too long. But, I did like the "alternate universe" Superman stories that came out of the beginning of it, right after "Superman Forever."

I had thought that I might have included covers there that I hadn't read, but now I see that I do own every one of those issues. the first cover is the middle part of "Dark Knight Over Metropolis," which ends with Superman giving Batman the Kryptonite ring. In the second, a handicapped kid switches bodies with Superman and beats up the Teen Titans until Jericho takes over Superman and undoes the switch (*two* Superman takeovers in one issue!). Next comes "King of the World," the culmination of a story arc where paranoid, sleep-deprived Superman, addled by Dominus's influence, takes over the planet with super-robots. In the next image, a not-yet-green Brainiac was screwing with Superman's brain, and in the last one, Lex Luthor takes over Superman's powers with a satellite. I *have* read all those issues.

Most of the argument was tongue-in-cheek; I don't really blame Superman for "Infinite Crisis," but I stand by my argument, which grows more compelling the more I think about it.

And can anybody guess why all of this has happened? Because the average reader of the past 20-30 years doesn't care for the real Superman. This is why people like Chris Nolan have to butcher the mythos; and equally why Richard Donner did it right the FIRST time. Superman is better than all this. But nobody is interested. Essentially all anyone is concerned with is how crappy the world is and they want Superman to look more like Batman. The problem is that "an eye for an eye leaves the whole blind" but unfortunately that's what the fans want. Superman used to ask us to rise above all that nonsense, but nobody wants to hear it. And that's what caused such ass-hattery in the comics.