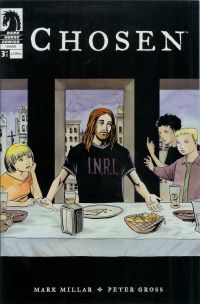 So, I just purchased and read the trade of Mark Millar's Chosen. Maybe it's the deluge of Revelation-inspired media in the popular culture recently, but I found it dreadfully predictable, and more than a little bland.

I suppose this is a good place for a Spoiler Warning, just in case.

So, Jodie Christianson (come on, Mark..."Jesse Custer" flew below my radar, but once you include "Christ" in the last name, particularly when it's not "Christopher" or something more normal, you're being a little obvious) believes himself to be the second coming of Jesus Christ. The story is narrated by the adult Jodie, whose face you never see--his head is always silhouetted out. Just about the time the first of these "adult Jodie" framing sequences pulls you out of the narrative, the ending of the story begins to become clear. After all, dressed in a suit and tie and speaking to his devoted followers, adult Jodie looks and sounds like every version of the Antichrist I've ever seen in modern representations. And I haven't even been paying attention. I haven't read the Left Behind books, I didn't watch NBC's "Revelations" miniseries, and I certainly don't go out of my way to find people who think the Apocalypse is nigh. Yet I could easily predict Millar's paint-by-numbers plot, and by the time Jodie does his ILM resurrection of a dog, any doubt as to the main character's identity and destiny is completely gone. The climax comes and goes without any surprises, and the book ends rather suddenly.

All of this left me feeling pretty unimpressed, and disappointed that something so pedestrian would come out of the same guy who gave us Superman: Red Son. Hinging the story on a big twist that should have been apparent to anyone who knows anything about Christian mythology* was really the book's big failing. The mystery of Jodie's true identity was entirely manufactured; you only wondered who he was because Millar kept saying "hey, you should be wondering about this," not because you had any genuine sense that things were not as the characters believed them to be. Perhaps if Jodie's character had driven the story rather than the forced mystery plot, I would have felt less let down. As it was, it feels like Millar had a great idea, but didn't know where to take it or how to end it, or was building up material for an ongoing series that became a three-issue mini halfway through scripting. It felt like the story should have been about more than just "M. Night Shyamalan's Revelation." Look, he's really the Antichrist, what a twist!

I should make the point that it's not all bad, naturally. The art is very subdued and fits the tone of the book nicely, and both dialogue and art are absolutely laden with symbolism. Jodie's first word in the book is "Jesus." His first miracle occurs when a dog named Angel (just like my puppy!) causes a truck to hit him. He has a falling-out with a priest-who-has-lost-his-faith (another stock character, and also an M. Night Shyamalan favorite!), and ends up walking away from the disbelieving priest on a road named "Division Ave." In the way of foreshadowing symbolism, we see another street sign in that panel, reading "One Way," and Jodie is walking away from it. When the disbelieving priest asks God for a sign as to Jodie's real identity, the dog Angel gets hit by a car and killed--a "fallen angel." Plus, there's the multitude of characters with Biblical names. Symbolism applied with a trowel works here because, let's face it, when you're telling something that's clearly based in the Bible, any symbolism will be pretty obvious, and a lack of it would suggest a lack of research or depth.

Back to the bad, the "adult Jodie" was another failing, due to the small problem of being so cliché and uninteresting as to give away the end of the story. I should amend my earlier statement: this Antichrist was exactly like every other pop-culture Antichrist I've ever encountered save one: Adam, from Neil Gaiman and Terry Pratchett's fantastic Good Omens. Gaiman and Pratchett, unsurprisingly, give us everything that Jodie Christianson left us wanting in an Antichrist, although my primary desire for Jodie was a willingness to stand up against his father and his destiny and to take a stand for everything he believed himself to be. Here's a kid who actually wants to do good with his godlike powers, but undergoes some off-panel conversion (involving demonic rape, which I can't imagine would really endear anyone to your side) to the charismatic, evil character we expect the Antichrist to be. My point with this comparison (which really got lost somewhere in there) is that there are ways to portray common characters that aren't common portrayals. Gaiman and Pratchett did it with their Antichrist, Gaiman and Mike Carey have done it with Lucifer, Ennis did it with God, and everything leading up to the end of this story showed us that Millar might do it with Jodie Christianson. Even the adult Jodie's comment that he once thought he and Jesus would be on opposite sides in the coming battle seemed to suggest (to me, anyway) that he found out he was the Antichrist and instead joined with the forces of good (so he and Christ would ultimately find themselves on the same side as opposed to opposite sides. Curse those words with multiple meanings!). Alas, what looks like novelty ends up being normality, and a good idea gets wasted on a bad plot.

Much like Millar, it appears I don't know how to end this post. I guess I'll just tell you to come back next time for more of Jesus and comic books! 'Tis the season, after all. 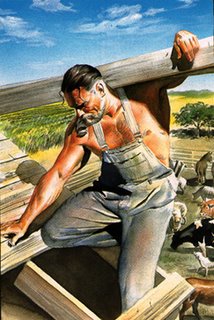 *By "Christian mythology," I don't mean to suggest that Christianity is a mythology, or that the Christian stories aren't true or anything. If this were a sociopoliticoreligiophilosophical blog, maybe, but not in a comics blog. What I mean by that term is the series of stories and concepts and mythologies that have grown up around Christianity and become part of the Christian cultural landscape, things like Dante's Inferno and Milton's Paradise Lost and pictures of Jesus as a white guy with long hair and a beard and pictures of Satan as a hooved red demon with horns and such. Things that ain't from the Bible, but are still assimilated into Christianity in one form or another. Hey, look, my first footnote!

I know I already mentioned this to Tom, but for any interested readers, I hear good things about the other Jesus-themed comic coming out around now - Marked. Supposed to be quite funny, juxtaposing Biblical era setting with anachronistic modern references. I don't have an author or anything because I'm too lazy to do research for a blog that isn't mine. Get to it, man!