For Jor-El so loved the world...

"Even though you've been raised as a human being you are not one of them...They can be a great people Kal-El; they wish to be. They only lack the light to show the way. For this reason above all, their capacity for good, I have sent them you, my only son."
--Jor-El, Superman: The Movie

"For God so loved the world, that he gave his only begotten Son, that whosoever believeth in him should not perish, but have everlasting life. For God sent not his Son into the world to condemn the world; but that the world through him might be saved...And this is the condemnation, that light is come into the world, and men loved darkness rather than light, because their deeds were evil...But he that doeth truth cometh to the light, that his deeds may be made manifest, that they are wrought in God."
--John 3:16-17, 19, 21 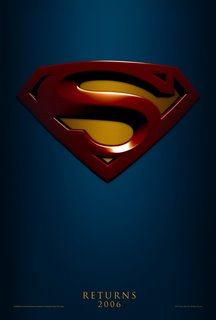 So I geeked out over the "Superman Returns" trailer. In fact, my inner geek was quite disappointed with the fact that they didn't show said trailer when I saw Harry Potter on Saturday. I'm sure I'll catch it on a big screen at some point. But somewhere in the midst of seeing just how cool Routh looks in action and how good the flying special effects are even at this stage, I managed to notice that Jor-El left out a "begotten" in his speech.

I'm not a religious guy, mind you. I'm a literature geek, and any lit geek can spot a Biblical reference and a Christ figure. A child is sent out from the heavens by his father, raised by humble surrogate parents, discovers he is more than a mortal man, and decides to use his superhuman abilities as a force of good and a saviour of humans. If you came into Superman knowing only that, would you guess that he was created by a pair of Jewish kids? 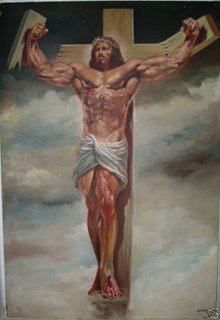 Of course, anyone who knows a little about world mythology will see just how universal that capsulized description can be. It's at the heart of Joseph Campbell's Monomyth, the archetypal hero behind Heracles, Mithras, Aragorn, Luke Skywalker, Gilgamesh, Beowulf, Moses, and Jesus Christ. Superman resonates with us because he comes out of this timeless tradition. He's not just a superhero, he's the superhero, the one who is burned somewhere onto our collective unconscious, who has popped up in every major religion, in every set of fables, since the dawn of human civilization. 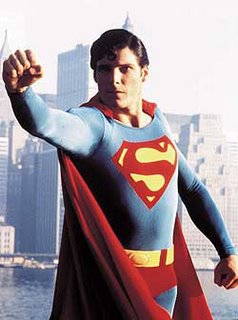 And the folks behind "Superman: The Movie" took that notion and ran with it. Much like the Star Wars trilogy, "Superman" plays out like Campbell's Hero With a Thousand Faces on celluloid. The whole Epic journey is there; the little nods to other Monomythic heroes, like when Jor-El channels the book of John in the above quote. Someone had a copy of Campbell on set, I'd put money on it.

The Crimson Avenger and the Phantom might have predated Superman when it comes to costumed crimefighters, but there's a reason that Superman is considered the first superhero, and that has more than a little to do with all the history that goes into his character. It's not just Samson, who Siegel and Shuster cited as one of their inspirations for the Man of Steel. Superman was a Monomythic hero from day one, from hoisting that green car over his head. Once they started fleshing out his backstory a little more, the connections to mythology became even more pronounced.

It seems hardly coincidence that Superman's real, Kryptonic name is Kal-El, an apparent neologism by George Lowther, the author who novelized the comic strip in 1942 [actually, the name "Kal-L" was established by the Siegel/Shuster comic strip. Lowther may have added the E, but the sound remained the same]. In Hebrew, el can be both root and affix. As a root, it is the masculine singular word for God. Angels in Hebrew mythology are called benei Elohim (literally, sons of the Gods), or Elyonim (higher beings). As an affix, el is most often translated as "of God," as in the plentitude of Old Testament given names: Ishma-el, Dani-el, Ezeki-el, Samu-el, etc. It is also a common form for named angels in most Semitic mythologies: Israf-el, Aza-el, Uri-el, Yo-el, Rapha-el, Gabri-el and--the one perhaps most like Superman--Micha-el, the warrior angel and Satan's principal adversary.
The morpheme Kal bears a linguistic relation to two Hebrew roots. The first, kal, means "with lightness" or "swiftness" (faster than a speeding bullet in Hebrew?). It also bears a connection to the root hal, where h is the guttural ch of chutzpah. Hal translates roughly as "everything" or "all." Kal-El, then, can be read as "all that is God" or perhaps more in the spirit of the myth of Superman, "all that God is."

Personally, I think it makes more sense to go with "Swiftness from God," in that he derives his powers, like speed and flight, from a higher entity, from a heritage that, in Siegel and Shuster's time, consisted of a whole race of supermen, demigods from the heavens. One only wonders what "Jor" means in Hebrew. Well, I do anyway. There's a lot more to Superman than red underwear and blue tights. There's several millennia of human literature sewn into that cape. And now, having died and been reborn, deriving his amazing powers from the sun (like Christ-like sun gods Mithras and Apollo), and standing at the head of DC's own Holy Trinity, Superman's links to the Monomyth have only grown stronger. 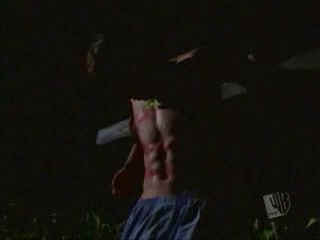 Does this mean you ought to worship Superman? Is he the Son of Man of Tomorrow? Our Saviour of Steel? Certainly not. What this means is that comic books as literature, tied into the grand scheme of human literary history, is not new. It's as old as Superman, and Superman consequently is as old as humankind itself.

So, ultimately, it's nice to see Singer and crew taking a similarly literary approach to the new film. Supposedly Superman has gone into another exile (like the 12 years he spent in the Fortress in the first film). Has he gone into the vast deserts of space to be tempted and tested? Seeing this messianic imagery in the trailer makes me wonder how much better Superman III and IV would have been if they'd paid more attention to the character's literary history and less to cheesy comic book filmmaking.

Excellent post. I'm glad you pointed out that very Biblical dialogue in the trailer.

It really is a spectacular teaser for the film, isn't it? I can't wait.

Someone at work was saying this meant they changed the origin. I like your explanation better.

Given this reading, Zod makes a great Satan - even being cast out from Heaven into the phantom zone....

Actually, that's excellent, psychbloke. I hadn't even considered that, but it fits perfectly.

So, this post is ten months old, but I have to clear something up:
Superman, at least based on his origin, is Moses, not Jesus.

Baby Moses is placed in a basket which is placed in a river because his life is in danger. The river carries the basket and baby down stream where he's found and adopted by a new family that loves him and cares for him. Eventually Moses learns of his true heritage and sets out to be a protector. (Sure, it's only of his people, but it still holds up.)

Baby Kal-El (or zygote Kal-El, depending on which origin you prefer) is placed in a rocket which is fired into space because the planet is doomed. The rocket carries him to Earth and a new family who adopts him and cares for him. Eventually, Kal-El learns of his true heritage and sets out to become a protector.

The Jewish-ness that started Superman has slowly been worked out after sixty-plus years of being worked on by gentiles who redefined him into a more Christ-like figure.

Or, at least, those are my thoughts on "Superman as a Religious Icon" discussions.

As far as "clearing something up," I kind of have to wonder whether or not you actually read the post. I'll give you the benefit of the doubt, though, and just further explain.

See, whether you're talking about Moses or Jesus or Samson or Gilgamesh or Luke Skywalker, you're talking about the Monomyth. The features of the Campbellian Epic Hero predate Christianity, predate Christ, predate Moses. The Monomyth is universal, at the heart of every major belief system around the world. So, yes, Superman's origin was absolutely based on Moses. So was Christ's. And Moses's was based on a mythological tradition that predated even the Egyptians' mythology.

The term "Christ-like figure" is shorthand; it simply defines a set of literary characteristics by using the most widely-recognized bearer of those characteristics. There are Christ figures who predate Christ (Mithras and Apollo, for instance, who I mentioned in the post), and they are all part of the larger Monomythological tradition.

The bottom line is that Superman started out with Moses and Samson fresh in the minds of his Jewish creators. Certainly Gentiles have written the character for much of the history since then, and Christian mythology has been incorporated into Superman as well (not the least of which is his Death and Resurrection). But even as Christian elements have slipped in, so have pagan elements (specifically the connection to the Sun). Yet Superman hasn't gone far from his Hebrew roots, he's just broadened his place in the Monomyth. Samson, Moses, Jesus Christ, Mithras, Apollo, and Superman are all part of the same mythological family. Superman can be (and is) a Christ figure and a "Moses figure;" most Christ figures kind of have to be.

OK, I just got here from Dubito Ergo Sum, so I'm a hundred years late, but you got me wondering about Jor-El, too.

Here's what I found at http://www.supermanhomepage.com/comics/comics.php?topic=articles/superman-satan (a post entitled Superman as Satan, interesting, but Christ-figure works better).

I've also found the translation "fear" or "awe" at other sites, but thought you might find this one interesting.

Superman is Moses, not Jesus. I would think that obvious.

Yes, that's why I mentioned it. Jesus is, in part, a riff on the Moses story, and they're both chock full of classic hero motifs.

The old testament says prophecy,and a promise which was given to Moses, and deep symbolism pointing to the coming of Christ. You say monomythic tradition. Obviously there are countless translations and interpretations however, it doesn't discredit what Christ accomplished. I find it personally odd how many schools of thought seem to seek to do this. I believe, and respect anyone elses quest for knowledge. There is much to be gained studying by studying any doctrine. But with discernment. Peace be with you.

Anyone who has endured true inner struggle has lived the monomythic diagram battle every couple few years, does that make thdm demi-gods? Its just life. Generalization elminates the true depth and meaning of everything.