A late post because I decided to let "Justice League" live in my head for a week. Spoilers ahead! 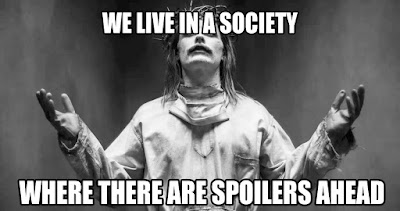 I deliberately avoided reading my original review of Joss Whedon's Zack Snyder's "Justice League" before I rewatched the movie over the last couple of evenings, because I wanted to go in as fresh as you can with a movie you've seen before.
Having re-read the post...well, it's good to know that despite all the things that have changed in the last four years, my writing style hasn't. I noticed a lot of the same details, made a lot of the same references and jokes, and generally the biggest difference was that I was a lot less forgiving of the movie's flaws and faults the second time around.
I suppose it's comforting, in a way, but I apologize if anyone read both posts and thought "why the hell are there two of these here?"
Posted by Tom Foss at 10:24 AM No comments:

Prelude to a Bad Decision

I decided, apropos of nothing, to put on Joss Whedon's Zack Snyder's "Justice League" while doing some work today. I discussed the movie when it came out eleventy billion years ago, and thought it was fine. It's not good, but grading on the curve of every DCEU movie up to that point, it was a solid B-. Sitting in 2021, I remember bits and pieces of it—Steppenwolf looking like he stepped out of an XBox 360 cutscene, the decent cell phone video of Superman that was marred by the terrible attempt to CGI out Cavill's moustache, all the characters sounding like their rough counterparts in "The Avengers"—but not a lot of details.
Obviously the intervening years have altered my perspective on the film, both through the revelations about the behind-the-scenes racism and abuse and through the fanatical and also frequently abusive behavior of the fans clamoring for this version of the film, which absolutely definitely existed and was finished years ago and also needed an additional $70 million dollars and reshoots to complete.
That perspective has not been altered for the better.
Against my better judgment, I'm going to watch the Snyder Cut sometime, probably this weekend, so I figured it'd be good to see how it deviates from the theatrical release, like I did for the Lester and Donner cuts of "Superman II" so very long ago. I don't expect to enjoy either one; my feelings on the superhero movies of Zack Snyder are well-documented, and even under the best circumstances, four hours is too @#%*$! long for a superhero movie. But four hours of nihilistic spite dressed up in cinematic deepities and CGI with a sepia-toned overlay is unlikely to be the best of circumstances.
Will it be better than two hours of the extremely generic re-skinned "Avengers: Age of Ultron" that got released to theaters? There's only one way to find out!
Read more »
Posted by Tom Foss at 9:30 PM 1 comment:

Superman & Lois - The Perks of Not Being a Wallflower

I was almost ready to comment on how this series is using single-word episode titles, just like "Smallville" did, but now we've got this mouthful playing on a book that was roughly contemporary with that show. It's pretty clunky, but whatever.
It's nice that this episode gave us a break from the Luthor story, choosing instead to focus on Lois's investigation and some good character moments for the Kents and Lana's family. The mantra that "life is simpler in Smallville" gets an explicit repudiation, some fences are mended, and some new mysterious antagonists are introduced.
Spoilers ahoy!
Read more »
Posted by Tom Foss at 7:07 PM No comments: