I think I've figured it out. If "Lois & Clark" was "Moonlighting" with super-powers, "Smallville" was "Dawson's Creek" with superpowers, and "Supergirl" started as "The Devil Wears Prada" with superpowers, then "Superman & Lois" is "This Is Us" with superpowers.
Spoilers ahead!
That may not be entirely accurate—I've watched maybe 15 minutes of "This Is Us"—but I feel like that's the kind of tone this show is going for, the family-centered melodrama. The kind of show that would be designed to manipulate emotions and win Emmies if it didn't occasionally feature CGI battles between Superman and an alternate-universe Lex Luthor. I thought after the pilot that the muted color palette was an attempt to visually echo the Snyder movies—and that may be a piece of it—but it also reminds me of every clip I've seen of that show where the guy from "Heroes" gets killed by a pressure cooker.
The result is a show that isn't quite like any of the other superhero shows on The CW. The closest (of the ones I've watched) is "Black Lightning," which similarly was about an older hero trying to raise a family, but even that felt more like "The Flash" in terms of cinematography and structure. You still had the Hero being directed by the Guy In The Chair to face a particular threat. Superman doesn't have the same support network, or the same relationship with his kids and the problem of adolescent superpowers.
I continue to be cautiously optimistic about this series after episode two. I can see where some of the plots could easily go sideways, and the decision to cast two black male actors as two of our antagonists when the rest of our principal cast is pretty lily-white is Not Great, but right now I'm interested in seeing how things go, and I don't really understand where some of the vitriolic fan response is coming from. At worst this show is fine.
There's a lot I like here. Every character's core conflicts internally and externally are already built at this point, and there are good points of conflict and connection between most of our main cast members.
It would be easy to fall into the trap where Clark can't do anything right as a parent—which seemed to be the direction they were going in the pilot—but it's clear here that he's doing his best, and that leads to good moments with the kids.
It's nice to see that the relationship between Clark and Sam Lane isn't all sunshine and roses; they have reason to distrust one another, and while they both clearly think they're doing the right things to keep their family safe, they have very different ideas about how to do that. It's also interesting that they're bringing in Project 7734, which I think first appeared in the World of New Krypton story.
It's interesting that the trend has been to show Jor-El with a beard since...at least Superman: Secret Origin, but maybe as far back as the Richard Donner run on Action or "Up, Up, and Away." 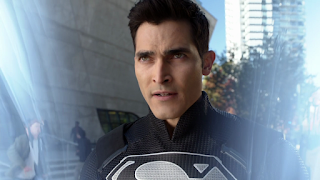 After years of seeing evil/corrupted/morally-ambiguous versions of Superman in the comics and prominent adaptations and pastiches—including the Injustice games, which we saw Jordan playing in the pilot—it's kind of a stroke of brilliance to make the main supervillain of this piece a version of Luthor from a world where Luthor was right and Superman was bad or went that way. It may be petty of me to appreciate that the evil Superman is wearing a black costume as in some prominent scenes by that one director with a New 52-style high collar (even if it looks to be the same costume that the evil Superman wore in the "Elseworlds" crossover a couple years back), but I'm embracing it. It's a good, simple visual shorthand.
Speaking of costumes, I think it's interesting how much Hoechlin's main Superman costume for this series looks like the costume from the Smallville Season 11 comic and Superman: Earth One, down to the two-toned blue areas. 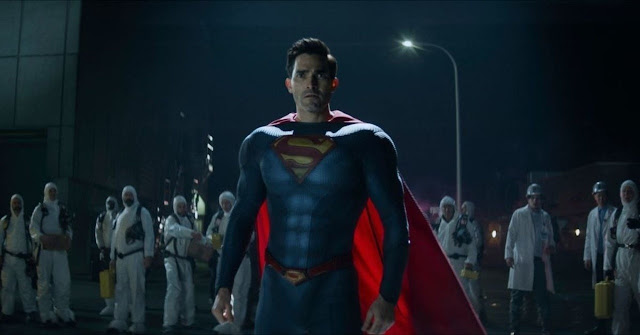 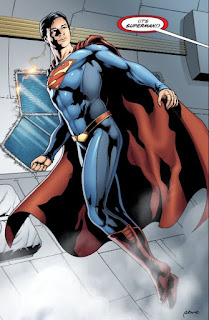 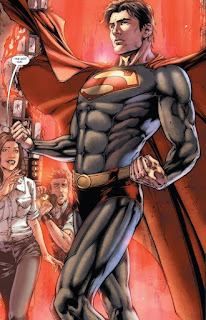 It even has the same belt as that Smallville costume. Of the three main suits Hoechlin has worn—the one on "Supergirl," the Fleischer-inspired one in the pilot opening, and this main one—this is easily my least favorite; the muscles feel padded or painted-on (which is understandable; that visible eight-pack abs physique may be sustainable for a few weeks of film shooting, but not for the months needed to film a season of television), and it just feels more muted than even the darker blue of the "Supergirl" costume. But it's not bad, and making the belt red and yellow helps make up for the lack of trunks, and the two blue shades are one solution to the endless field of blue that most trunk-less versions of the costumes have.
It's nice that every character has a clear arc ahead of them, and I do hope that (especially since her name's in the title) Lois's story gets increasing focus over the season, despite what we've heard from the writers' room. It's one of the plots that I can see going sideways—the Big City Reporter coming in to keep the Backwards Hicks from acting against their own interests, or learning that maybe her Big City Liberal Ways just don't work in the simple lives of Rural Americans—but I feel like the way things are set up now shows a degree of awareness that might avoid those pitfalls. We see complications to the "life in Smallville is simpler" mantra here—Sam Lane rejects it outright—and Morgan Edge is a prime indication of the fact that the same problems are at play in both the big cities and rural towns.
I've lived in rural farm towns for most of my adult life. I've seen towns try to out-bid each other with municipality-killing tax breaks over businesses as small as local car dealerships, let alone big billionaires with promises of better jobs. I've had conversations with people who think the unions just have too much power these days and the owner takes all the risk so he should be able to take all the profits too. A show that's going to champion the need for independent local press when conglomerates are buying up papers and stations around the countries, that's going to argue that accepting scraps from billionaires because you're desperate is tantamount to extortion, that's a show that speaks to me, at least, and hopefully speaks to some people who might otherwise be hostile to those kinds of political messages.
It is weird that Edge is interested in Smallville's mines rather than, you know, its farms, but I can see some logic behind that story decision. I do wonder if it's going to tie into some of Edge's more comic book-style motivations. Is there Apokoliptian tech in these mines? Kryptonite? Who knows?
Overall, I think this is a pretty strong start. It's not perfect, and I honestly wish the tone were a little closer to some of the other CW superhero shows, but I understand why they'd try to distinguish themselves from the pack. I'm invested in the characters, and I'm interested to see where the story goes. I realize that I'm a cheap date when it comes to Superman adaptations, but so far I'm enjoying this one more than most.
Posted by Tom Foss at 1:29 PM

Agreed on all of your points, Tom. I wondered, apropos of our two African-Amerian antagonists, if you had any thoughts on the decision to give Chrissy Beppo, one of the other main non-white characters, the name of a monkey from the Superman comics? I understand there was a Beppo character in Smallville, but this seems inappropriate in a lot of ways.

I had not caught Chrissy's last name. Digging into it, the Smallville-universe character was "Christopher Beppo," who worked for the Smallville newspaper, so it seems like that's the intended reference. But hoo boy maybe read like, I dunno, the only line of that character's Wiki entry where it says he was named after Beppo the Super-Monkey before you give that name to a character portrayed by a woman of color. Not a Good Look, at best.

yeah. i hope they find a way to fix that somehow. i can’t think how though. still - loving the recaps and enjoying seeing your super-words turn up on my feed reader again!