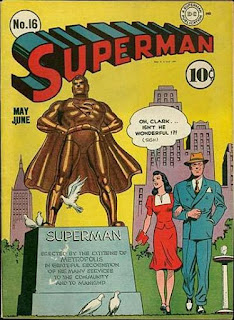 The Man of To-morrow’s Lament

I have to wear these glasses – otherwise,when I caress her with my super-eyes,her lungs and liver are too plainly seenthrobbing, like deep-sea creatures, in betweendim bones. Oh, I am sick of loitering here,a banished trunk (like my namesake in “Lear”),but when I switch to tights, still less I prizemy splendid torso, my tremendous thighs,the dark-blue forelock on my narrow brow,the heavy jaw; for I shall tell you nowmy fatal limitation … not the pactbetween the worlds of Fantasy and Factwhich makes me shun such an attractive spotas Berchtesgaden, say; and also notthat little business of my draft; but worse:a tragic misadjustment and a curse.

I’m young and bursting with prodigious sap,and I’m in love like any healthy chap –and I must throttle my dynamic heartfor marriage would be murder on my part,an earthquake, wrecking on the night of nightsa woman’s life, some palmtrees, all the lights,the big hotel, a smaller one next doorand half a dozen army trucks – or more.

But even if that blast of love should spareher fragile frame – what children would she bear?What monstrous babe, knocking the surgeon down,would waddle out into the awestruck town?When two years old he’d break the strongest chairs,fall through the floor and terrorize the stairs;at four, he’d dive into a well; at five,explore a roaring furnace – and survive;at eight, he’d ruin the longest railway lineby playing trains with real ones; and at nine,release all my old enemies from jail,and then I’d try to break his head – and fail.

So this is why, no matter where I fly,red-cloaked, blue-hosed, across the yellow sky,I feel no thrill in chasing thugs and thieves –and gloomily broad-shouldered Kent retrieveshis coat and trousers from the garbage canand tucks away the cloak of Superman;and when she sighs – somewhere in Central Parkwhere my immense bronze statue looms – “Oh, Clark …Isn’t he wonderful!?!”, I stare aheadand long to be a normal guy instead.

It's kind of wild just how much Superman discourse is presaged here, how many story and character beats we'd see play out over the next eighty years.

It's been an increasingly long time since I did any kind of regular poetry analysis, as evidenced by the fact that I needed to Google "thing where a poet ends a line in the middle of a sentence" in order to talk about how much enjambment there is here. Honestly, I do like a good rhyming couplet, and I appreciate Nabokov's commitment to using them throughout here, even if it means overusing that technique.

The references to the war in the first stanza are interesting; Andrei Babikov's commentary in The TLS suggests that this is an attempt to compare the character with Hitler, emphasizing the comment about the forelock (and drawing comparisons to Chaplin's "Great Dictator"), but Hitler's forelock—if you can really call it that—has very little in common with Superman's trademark s-curl, which doesn't merit mention in Babikov's discussion. To me, this reads more like an acknowledgement that Superman may be selling war bonds and punching Nazi ships and even hoisting Hitler up by the scruff of the neck, but he's a character from the realm of Fantasy, not Fact, and he's powerless to do anything about the real issue. Even in the comics, they might show Superman knocking around tanks on the front lines, but Superman's only encounter with Hitler himself notably came in the pages of Look Magazine two years . Superman's service in the war was limited to four-color fictional Nazis.

But as much as I like the imagery of the dark-blue forelock, calling to mind the coloring of classic comics, I'm more than a little disquieted by "young and bursting with prodigious sap." The earth-shaking imagery in the rest of that second stanza got a laugh from me. I appreciate that it's less graphic than the Niven essay, "blast of love" aside.

Stanza three predicts so many Superbaby stories, particularly from the Silver Age, but even "Letitia Lerner, Superman's Babysitter" has these same elements of an indestructible toddler causing mischief and mayhem. But also it speaks to Nabokov's own anxieties as a parent.

The closing stanza, though, is where things get a little eerie. "No matter where I fly, / red-cloaked, blue-hosed, across the yellow sky, / I feel no thrill" might as well be "I can't stand to fly / I'm not that naïve." The desire to be normal, in part to have normal relationships, is a major character trait in "Superman II" and "Smallville." Honestly, almost every instance we've seen of Clark Kent being morose and brooding over the last eight decades is predicted right here in this unpublished poem.

Overall, it's an interesting artifact. It shows that some ideas, some sorts of discourse around this character, are older than we might realize.