So, I haven't watched "The Falcon & The Winter Soldier" yet (though I have been working my way through the Gruenwald run on Captain America in conjunction with the War Rocket Ajax "FalChris and Wilson Soldier" series), but even before the show started, a discourse that's become common, especially regarding MCU movies, cropped up regarding the "anarchist" Flag Smashers. The complaint goes like this:

Corporate capitalist Disney creates villains who have good, correct politics, but then makes the villains do evil stuff to undermine those politics.

Or something to that effect. And on the surface, it seems true. Setting Magneto aside (the ur-example of this particular issue), the MCU has given us Killmonger, Vulture, Thanos, and (arguably) Baron Zemo as sympathetic villains who espouse various leftist political ideas. Killmonger is a vocal opponent of colonialism, Vulture was a critic of billionaire Tony Stark and a champion of the working class, Thanos wanted to end environment-ruining overconsumption, and Zemo...well, something something his family died. I assume he gets more characterization in the TV series.

But in order to undermine those political philosophies, Disney has each villain do bad stuff! Killmonger kills his girlfriend! Vulture tries to kill Spider-Man! Thanos...well, there's a distressingly large number of people who don't see what Thanos did as particularly villainous.

On the surface, it's compelling, and it pre-empts my usual "[Villain] was right, actually!" response, which is "maybe pay more attention to their actions than their rhetoric." But I still think it's a really facile read. Killmonger talks a big game about opposing colonialism, but he's a CIA-trained operative who destabilizes governments, and his plan is verbatim what we're told he learned from the Agency. He isn't an opponent of colonialism, he just wants to be the colonizer. Vulture has the folksy accent of a working-class guy, and is certainly a small businessman next to Tony Stark, but he's a boss. He owns his business from the start, and ends up using his wealth to buy a mansion, while his employees sure seem to be living a lot more lean. Thanos gets an omnipotence glove and instead of using it to increase the amount of resources or improve distribution, he destroys half of all living things, which would include a whole lot of the resources that he's so concerned about.

These aren't leftist characters who do a villain thing out of nowhere to make sure the audience connects leftist politics to villainy, they're villains who use a veneer of leftist politics to justify their heinous actions. Something that you might note if you're the kind of person who's ever had to explain that while "Nazi" is short for "national socialist," they weren't actually trying to seize the means of production for the working class.

And MCU movies aren't exactly subtle about this. Every sympathetic MCU villain I can think of shares the screen with some counterpart who espouses the same kinds of leftist ideals in a genuine way. From the start of "Black Panther," Nakia argues that Wakanda needs to be less isolationist and use their resources to help people. Vulture and Spider-Man both have tech taken from Tony Stark, but Peter still lives in an apartment and uses his resources to help the everyday people around him, not to enrich himself. Gamora shows us the human cost of Thanos's fanaticism. Hell, the very next thing he does is destroy the Infinity Gems, further reducing the resources of the universe.

But leaving all that aside...there are also a whole lot of people out there who share a lot of my politics and still end up taking them to extremes that I find abhorrent. People who I'd agree with about the problems of capitalism, but who think "identity politics" is a neoliberal psyop and trans people are the result of bourgeoisie decadence. There are people I'd agree with about the horrors of American imperialism, but who think North Korea is just hunky-dory. "Left-leaning person who goes too far off some deep end" is definitely an overused trope in media (see also: "Community") but it's not like it's unrealistic.

The thought finally crystallized for me when I was (to bring this full circle) reading Flag Smasher's first appearance in Captain America #312. There's a lot of back-and-forth about philosophy between him and Cap in that comic, and there are definitely places where I agree with Flag-Smasher and disagree with Captain America. 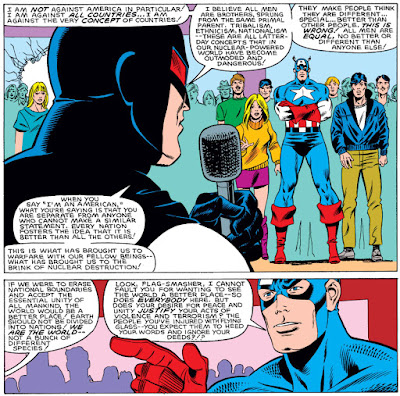 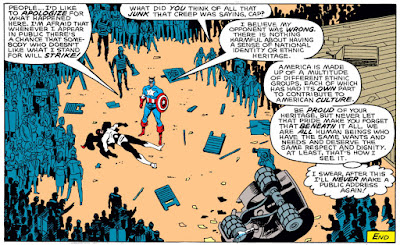 But for as much as I might agree with some of Flag-Smasher's theory, I can't get behind his praxis. And as much as I might disagree with Cap, I can recognize that he does good things for the world. Like, this issue is about Cap using an unexpected financial windfall to set up a hotline so average people can call him and get him to help them, and that is a much better use of time than burning down a factory that makes American flags.

In short, Flag-Smasher is doing grand but ultimately meaningless media stunts, and Cap is doing actual activism. Who would you rather have on your side?

So, anyway, I started this post a couple of weeks ago. I've since watched "The Falcon & the Winter Soldier," thought it was mostly fine (though they really needed to do more with Isaiah Bradley), and figure most of what I said here applies there too. Now let me just take a big sip of coffee and check in on the current comics discourse... 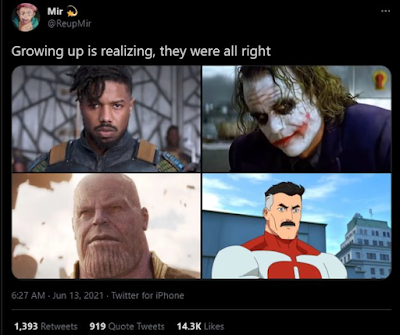 *spit take* Batman won't do what?!