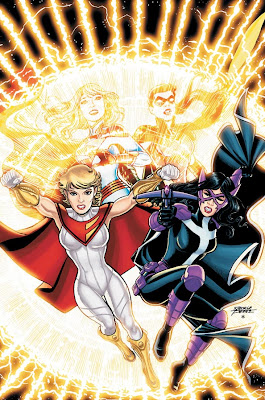 Seriously, how cool does that look? I mean, George Pérez is amazing, but I don't think I've ever seen him do a face that looks like Power Girl's there before. And having Huntress start out as Robin? That's a stroke of brilliance. I really like the redesigned Power Girl costume, too. Just, top-notch work there.

I'm less thrilled with the variant cover for Earth-2, but I'm interested to see what the whole premise is. 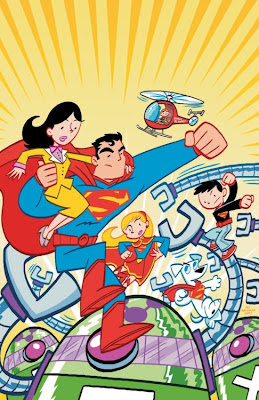 I really wish it wasn't the New 52 costume, but what are you gonna do? At least it isn't covered in stupid lines.
Posted by Tom Foss at 8:42 PM 1 comment:

Wisdom of the Ancients

As a kid, and well into adulthood, I was a pretty typical pretentious dork. I absorbed knowledge and loved to share it--or more accurately, to lord it over others. "Um, actually," has been one of my go-to phrases for most of my life, even well before I got access to the Internet. I picked sides, even among things where there was no conflict. And all this manifested in a very particular way when I found out about the Crisis, and how it changed Superman.

I've mentioned before that my first real comics, outside of the ones that came with He-Man toys, were books that my mom had from the late '60s and early '70s. I read them over and over, and I could still outline nearly every story from them--the one where the Super-sons team up with Green Arrow and the Flash, the one where three-eyed aliens imprison the Legion and Blockade Boy is killed, the one where Superman uses the yellow S-shield on his cape to block Green Lantern's power ring, and so on. I absorbed every bit of information I could from them, from identifying obscure characters to memorizing Johnny Quick's super-speed formula. I did the same with books from the library and school book fairs that gave information about Spider-Man, the X-Men, the Hulk, and Captain America. I could tell you what strength class Wolverine was in, and what that meant in terms of tonnage.

But the apex of all that was when I subscribed to the Superman titles in late 1992, and came across the Wizard Death of Superman special edition at, I believe, a Toys 'Я' Us. I read it cover to cover multiple times, poring over the little facts at the top of the page. And I learned all about what made the new, modern Superman different from the old "pre-Crisis" version. And I spent countless conversations with my mom correcting her on how Superman is now.

So I sided with the post-Crisis Superman, and for a long time I wouldn't accept any deviations from that. I disliked Birthright in large part because of its departures from Man of Steel. I even came into All-Star Superman with that attitude. And I'll admit, there are still things I think Man of Steel got more right than some subsequent versions. Like keeping the Kents alive and having a non-indestructible costume. But as time and reboots and retcons have worn on, I've softened my stance and opened my mind to other alternative takes.

It's only very recently, though, that I've realized just how much I internalized that "post-Crisis is better" mindset. I own, in one form or another, nearly every regular Superman comic released since 1986, but until recently I never dipped more than the occasional toe into that era between the Silver Age and the Crisis. I still saw those stories as illegitimate, as less-than. It was last year's "Walking with"-related Superman-binge that really pulled me out of that headspace, and I've found myself trawling through various back-issue boxes for issues with striking covers and interesting motifs ever since.

And a lot of those comics are really good. There's a sense in that Bronze Age Superman era that the creators were really trying to take the Silver Age style of storytelling and modernize it, making bold changes and introducing new characters, telling longer and more complex stories, while maintaining the general hook of crazy ideas that could be represented with an interesting cover. While some creators--like Geoff Johns and Brad Meltzer--are clearly and heavily influenced by this era, it's guys like Grant Morrison who are really the embodiment of that sensibility in the modern age.

The best part about all this--besides giving me lots of fodder to draw from for "Walking with Superman"--is that when confronted with modern Superman stories that just aren't up to snuff, I have this whole twenty-year-or-so span of comics to check out, that are largely available in good condition for very low prices.

And the worst part is that I have twenty-odd more years of comics to take up space and cost me money.
Posted by Tom Foss at 5:05 PM 1 comment:

I doubt that I even need to link to the news that DC is officially doing prequels to "Watchmen," with a list of some of the hottest stars in comics talent, and also J. Michael Straczynski. A few years ago, I might have been incensed. I had choice words a few times over the "Watchmen" film when it came out, but my opinion on the book--and on Alan Moore--has somewhat mellowed in the intervening time. It's a great comic, to be sure, but literature didn't stop producing masterpieces after Moby Dick, to borrow Mr. Moore's example, and I kind of wish we could get past "Watchmen" as the be-all, end-all of comics storytelling.

In terms of the project, they've certainly done their best to pack it full of great creators, but I can't even feign interest in it. It's a huge amount of single issues for a story that, as far as I can tell, has already been completely told. I'm glad it's not a sequel--that would have been even more pointless--but I have absolutely no desire to read any more about these characters. I can't say that about other great comics, either; I'd read more "Sandman" in a heartbeat. But "Watchmen" has a sense of completeness about it, and I just can't really see the room for any other interesting stories in there. I suppose I could easily be wrong, and I'm sure there's a market for it--I spent much of my childhood reading the bizarre minutiae of why every weird alien was in Mos Eisley Cantina or Jabba's Palace--but that market no longer includes me.

What I'd really like to see is for the comics industry to get to a place where it's possible to take a gamble on a satirical pastiche of politics and society and comics again, rather than continuing to re-hash ones that still involve Ronald Reagan. I wanted to criticize this project for its irrelevance, but as Chris Sims aptly noted, there are parts of "Watchmen" that are even more relevant to comics now than they were in 1986. I don't know how or if comics will ever get back to that point--at least, conventional comics--and I don't see "Watchmen"-level satire happening over at The Gutters.

I can't fault DC for doing this project (though I can wonder why they'd do it now and not three years ago as a movie tie-in). It's going to make money, and that's what business is about--especially in a shrinking market that does not reward experimentation, innovation, or anything better than rote recitation of the old and familiar. I just hope the project is successful enough to allow DC to take some chances in other places. It would be a stroke of brilliance--and a boon to the entire industry, if "Before Watchmen" bankrolled the comic that takes the place of "Watchmen" in the comics discussion lexicon.
Posted by Tom Foss at 9:48 PM No comments: