Since I've already gone over most of the highlights of Superman II, this will mostly be me remarking on places where the two films differ.

The movie opens with the trial scene again, this time with Jor-El actually in attendance, and without any indication of how they caught Zod and his cronies. The truncated introduction moves fairly quickly through the important bits, giving us a couple of new moments--baby Kal-El learning about his super-blankets in the ship, a different shot of the Phantom Zone criminals in their eternal prison, and such. 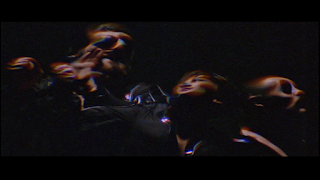 Scenes from the first film are inter-cut with scenes of the Phantom Zone frame spinning through space, until it ultimately collides with the first missile from Luthor's plot, releasing the criminals from their prison. It answers a point I hadn't considered until just now: if shockwaves from the detonation of a hydrogen bomb could break open the Phantom Zone, as they did in the Lester cut, wouldn't shockwaves from Krypton's destruction have done so long before that?

The opening sequence is more similar to the first movie's, leaving out the recap clips, and with different text-flying effects.

It's nice to see Lois starting to figure out Clark's dual identity right there at the beginning. 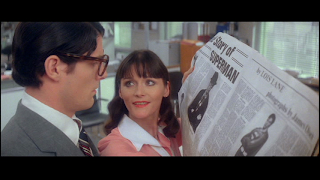 It's also interesting to see the role reversal of Clark and Lois on the Honeymoon story--in this version, Lois is all for it because it'll give her a chance to expose Clark's secret, while Clark is doing a series on the city council. They have a lot of the same dialogue that Lester put in Niagara falls, except in the newsroom. And it's capped off with Lois jumping out a window instead of into a river. As in the Lester version, Clark rushes to save her, but without changing to Superman. There are a couple of clever bits here, but it's actually not as smooth as the Lester version. Clark's a lot more conspicuous and inefficient with his abilities than in Lester's cut.

The bits on the moon are identical, so far as I can tell, but the banter at mission control is better. One thing that keeps surprising me is how comedic director Lester replaced jokes with less funny jokes. At least he had the sense to leave in the bit with Otis and the balloon.

There's some nice banter between Miss Teschmacher and Lex outside the Fortress, right up until he obliquely threatens to knock her teeth out.

The crystal system gives us Jor-El this time, and while he does a bit of philosophizing at the beginning, we still get a bit of Joyce Kilmer poetry. Weirdly, the last bit--the bit that Lara stated in the previous film--comes from Jor-El's floating disembodied head, which makes for a weird effect. 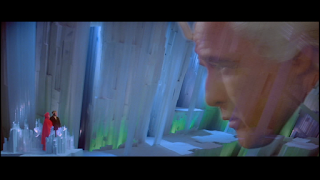 I do like that Jor-El explains that most Kryptonian criminals were rehabilitated, and that the Phantom Zone was really a last resort for those who had no chance of re-integration into society. It's further interesting that Zod, Ursa, and Non were the only criminals in the Phantom Zone.

And then Miss Teschmacher finds the bathroom. Which has a flushing toilet. Which speaks to some very big questions about the construction of the Fortress of Solitude. First: who provides the utilities? Is there a super-sewer, or just a super-septic-tank? Did the green crystal build the bathroom, or did Superman add that on later?

The movie proceeds unchanged through the Niagara Falls sequence and the Zod Squad's arrival on Earth, but then we get to a nice little scene with Clark and Lois at the Honeymoon Suite. I'm pretty sure this is one of those bits where they used the test footage because the finished scene never got filmed. Reeve looks awfully thin, and has different glasses for part of the sequence. 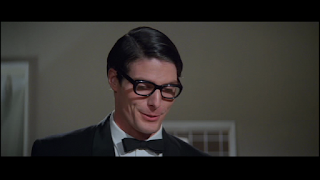 Lois goes through all of Clark's flaws, mostly trying to make him into Superman, and Clark expresses a good deal of resentment at the comparison. I do wish they'd gotten to do the full version of this scene, because it's great--Lois pulling out the gun and shooting at Clark, and outsmarting him in the process. Like I said in the previous post, it gives Lois a lot more agency, and exposes just how clever she is.

We get the scene with the cops and the Kryptonian criminals, which unfortunately still contains the weird heat vision telekinesis. In fact, this whole section seems to have survived the directorial change intact (or was never filmed under Donner), minus the "Non can't use heat vision" gag. Consequently, Non is a lot more menacing in this cut. Also, some of the special effects--particularly the bit where Zod deflects the flamethrower with super-breath--are considerably better in this version, and I wonder if that's how they were originally, or if they were cleaned up a bit in the restoration process.

This battle feels like the stakes are a lot higher, too. They slapstick bits are replaced instead with Zod and Ursa toying with the helicopters and soldiers, and we don't get any more of the weird telekinesis or anything. Unfortunately, the Mount Rushmore sequence is swapped out for a goofy-looking bit of the criminals knocking over the Washington Monument, which, while it makes a little more sense, isn't nearly as striking an image.

Oh wow, instead of Clark getting his clothes transformed in the molecule chamber, he's dressed in his casual clothes, and Lois is wearing his Superman shirt. 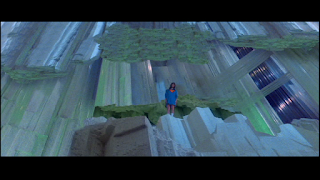 Risqué. The conversation between Clark and Jor-El is a lot more contentious--and makes a lot more sense of the power loss--than the lecture he gets from Lara in the Lester version. They even explain the chamber--not a "molecule chamber," but a device that will expose him to a concentrated dose of red sun radiation. I still don't like it, but it makes so much more sense this way, and it raises the issue of responsibility and reward. This is Spider-Man leaving the costume in the trash can stuff, not just arbitrary rules from dead Krypton.

Still no explanation for the Super-sedan, and sadly, we still have the diner scene, apparently identical. I mean, I guess that Clark might be shocked from feeling pain like that for the first time, at least the first time since he was a child, but even without his powers, he should be able to put up more of a fight than this.

"Kneel before Zod" count: 2. I thought there were fewer of these in this cut.

I like that Lex expects the Kryptonian criminals to know who he is. Such a great bit of his self-obsessed grandiosity.

Lester's contribution to a lot of this seems to have been cutting back and forth between scenes more frequently.

Jor-El spends a good long time scolding Clark when he comes back to restore his abilities, and while it has a good deal of pathos, Jor-El's disappointment kind of undercuts things. But having him appear and actually make contact with his son one last time...it's a much better return of powers than what Superman gets in the Lester cut. 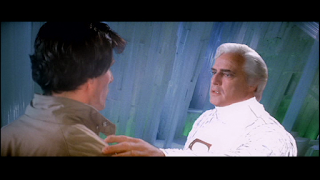 Even if Reeve looks awfully goofy just kind of vibrating.

It's also nice that we don't see the results until the wind sweeps through Metropolis and he makes his triumphant return at the Daily Planet. It gives that "care to step outside?" moment a lot more impact, because we're almost as surprised as everyone else to see Superman.

"Kneel before Zod" count: 3. Maybe I was wrong about how often he says it.

Superman gets hit into the Statue of Liberty, further demonstrating that Metropolis is just New York in the movieverse. 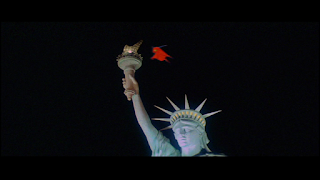 There are a lot fewer slapstick gags in the scene where the Phantom Zoners blow the people back with super-breath, and it doesn't go on nearly as long, but the guy in a sequined vest and roller skates is still there. So it's not all deadly serious. Lex's banter in the next scene also seems tighter. Zod's speech in the Fortress is also more menacing.

The power-depletion scene is basically the same, right down to "Luthor, you poisonous snake!" I still love that triple-cross, even if I don't love that the Phantom Zoners still all fall into Superman's bottomless pit (super septic tank?). And then Superman destroys the Fortress (with no indication that Lex left), leaving little doubt as to the villains' fates. Krypton had no death penalty, but Superman does!

Lois and Superman's teary goodbyes, like most of the things that were restored here, make more sense and have a good deal more pathos than they did in the Lester version. There's not quite the same assumption that Superman can't be with a human woman that there was in the Lester cut, though it's still weird that they don't continue the relationship.

Then, Superman turns back time to undo all the damage, everything that's happened since, presumably, he tossed that missile into space. The Phantom Zoners are alive again, the Fortress undestroyed, and Clark and Lois are back at square one, but with a case of déjà vu. Since they used that bit for the ending of the first movie, it unfortunately starts to look like going back in time is Superman's usual solution to all his difficult problems. And why not? If you could take a mulligan on every bad decision you made, wouldn't you?

Unfortunately, this makes Clark's return trip to the diner even more petty and out of character. Since Superman turned back time, this truck driver never met Clark in the first place, so Clark is just being a giant dick by beating him up. The turn-back-time solution solves the problems of the super-kiss, but makes this scene considerably worse.

And then it ends, again, with the same shot from the end of the first film. I wonder, if Donner had stayed on, would they have ended every movie with Superman flying into space in that same shot?

Overall: Despite the protestations of some, Donner's film really is the better of the two. Its tone is more consistent, it leaves out a lot of the unnecessary slapstick--which means a lot of scenes have a lot less padding--and it undoes a lot of changes that made so much of the movie just completely nonsensical. A lot of the bits of Lester's version that didn't make sense are salvaged here, though some of the plot-necessitated choices are still strange and contrived, and we still get some moments that just don't jive with Superman's character. All in all, I wish we could see Donner's whole vision, not a version that's so cobbled-together, and not a version where time travel is the solution to all life's problems. I don't think that would be the perfect set of two Superman movies, but it would be interesting to watch nonetheless.
Posted by Tom Foss at 8:47 AM