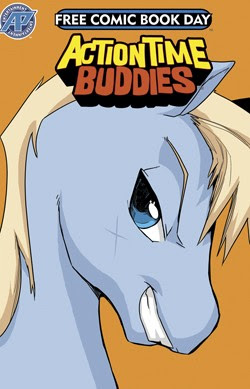 Looks like I confused Antarctic and Bluewater. So I guess ignore the bit about biographical comics and my points still stand.
Posted by Tom Foss at 8:26 PM No comments:

I'm going to make a bit of an effort to do more blogging here, even if it's just the sort of microblogging stuff I do elsewhere. Here goes!
I love "Action Comics" (vol. 1) #775. I bought it for the fourth (fifth?) time today, in digital form, because I wanted to finally watch "Superman vs. the Elite," and wanted to re-read the story first. I probably wouldn't have dropped the $1.99 if I remembered that it was downstairs in the easily-accessible "Superman: The Greatest Stories Ever Told" trade, but I didn't.

The story is admittedly preachy. The metatext of it becomes explicit in more than one place. And frankly, I don't mind. In fact, I'd feel it was kind of hypocritical to mind; what's preachier and more metatext-as-text than Grant Morrison's "Animal Man," which I love? Superman stories have some leeway in terms of preachiness, I think. Moralizing is part of the character, and I don't think that's a bad thing. Superman should be the moral center of the DCU (and Captain America, for the Marvel Universe), and with that comes a bit of preachiness, a bit of allegorical storytelling.

It helps, of course, that I largely agree with the allegory. But you know, people have been clamoring for more violent, take-no-prisoners heroes for decades, and other people have been responding to it in kind for the same amount of time. There's a big part of "Whatever Happened to the Man of Tomorrow" that's this same kind of statement, and it's the subtext underlying the whole "Death and Return of Superman" story. That's leaving aside the "Astro City" story with Supersonic, or "Knightfall," which are saying similar things.

And considering that two of the main characters in the original Authority are riffs on Superman and Batman, it's not like the pastiche and allegory began with Joe Kelly.
"Superman vs. The Elite" was quite good. I love George Newbern's Superman, and I wish he didn't get such short shrift on the character in favor of Tim Daly. About the only problem I had with it was the animation, which just felt kind of weird. The places where it tried to ape the grittiness and brutality of Mahnke's original art fell fairly flat. Otherwise, the stylization was fine, but it was just weird to see the disparity between the two styles.
Today, I finally read through "Superman: The Secret Years," a series I've owned for some months now without managing to read. It's an interesting take on Clark Kent's college years (and the awkward transition from "Superboy" to "Superman"), melding classic Silver Age elements with the social consciousness that comics tried (to varying degrees of success) to adopt in the '70s and '80s. And it's all topped off with Curt Swan art, which fits better than I might have suspected.

One neat thing, though, is how it deals with Clark's relationship (whirlwind though it may be) with Lori Lemaris, where it's clear that he never even considered looking at her with his X-ray vision, or he would have learned her secret (spoiler: she's a mermaid) on day one. Clark Kent, paragon of virtue.
Read, for the first time (except maybe in "The Phantom Zone"), a comic with Dr. Xadu and Zeda, the telepathic Kryptonian villains with the Cosmic Power-Grip. There's a cool couple of villains who deserve to make a resurgence in the DCU.

Of course, that could be said about a lot of villains.
Oh, hey, the Man of Steel trailer hit today. I'm as disappointed as anyone about another origin story, and I'm not thrilled at all about Deadliest Catch Superman, but a lot of what's there looks pretty snazzy, and hopefully the other two hours of the movie contain a decent amount of excitement, and maybe Superman punching some people/things.
Posted by Tom Foss at 11:24 PM No comments:

Putting the puzzle together

You've probably heard that Gail Simone was rather unceremoniously fired from "Batgirl."

There's a crossover--"Death of the Family"--going on in the Bat-books right now, promising to end with an "unspeakable tragedy" that puts Batman on the brink of "losing his humanity." Nightwing also loses "so much," according to solicits.

When Mike C. Nelson tweeted Gail "did you not put enough women in refrigerators or something?" she responded, "Funny you should say that."

So putting it all together: what character, probably female, is dying in "Death of the Family"?

After reading that Batman solicit, I would have guessed Alfred, and I still think that's the most likely situation. Who else's death would have such a major impact on Batman and Nightwing? He's not exactly a woman in a refrigerator, though, except in a very metaphorical sense. Unless Joker actually stuffs him in a fridge.

The other person that makes sense is Commissioner Gordon. He has the stronger ties to Batgirl, but what would they do in the wake of his death? We've barely seen any other GCPD characters, so it's not like there's someone they're grooming to take over. Still, might make sense that Gail would have something to say about this decision.

It might be Barbara Gordon, Sr. instead, which makes the most sense from a Gail-off-Batgirl perspective, if not a big-Batman-crossover perspective. Neither Bruce nor Dick have much connection to her, but Gail's been building her up as a supporting character in "Batgirl," and she's definitely "family." I can see where "oh, hey, we're killing Barbara Sr." might lead to some friction. But if Barbara Sr. is one of several casualties, it actually makes the most sense.

If not for the solicit that explicitly said Barbara was alive and confronting her brother, I'd guess that Barbara herself would be dying, in part as a "be careful what you wish for" to those annoying (to DC, anyway) Cass/Steph/Oracle fans.

Maybe I'm wrong, but it sure looks like this is the direction things are headed. Someone is dying in "Death of the Family," probably multiple someones, and the result is Gail Simone being kicked off a book that owes its popularity largely to her presence. Apologies to Ray Fawkes, but I don't think I'll be following his tenure on the character.
Posted by Tom Foss at 6:53 PM No comments: