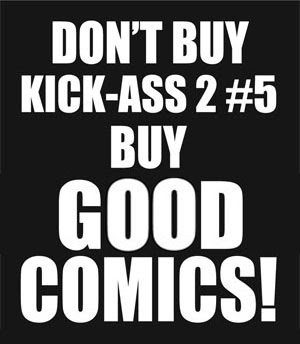 As I think I've mentioned, I've been playing a lot of "Batman: Arkham City." I've completed the main story and all Batman's side missions, gathered all of the regular Riddler trophies, and I'm mostly done with Catwoman's stuff as well. I figure I'll probably make sure I get some medals in most of the Challenge maps before I go on to the New Game Plus content. I know there's still the costume DLC in December, last I heard, but I kind of hope that's not the last hurrah for new content. What with the holidays coming up, I figured I'd put together my dream list of Arkham City DLC, in hopes that maybe some of it will come true:

New Challenge Map Characters: Playing as Nightwing and Robin and Catwoman is great--often more entertaining than playing as Batman. It makes me think that it'd be great to have some other character options. Ideally, Batwoman would be first up, but I'd be happy with Batgirl too--the difficulty being that I can imagine the alt-costumes for the latter (Cass's, Babs's, Steph's, maybe animated), but can't imagine them sharing the same voice when they're such different characters, and when Barbara is Oracle in the "Arkham" timeline. Again, ideally it'd be Steph, with Spoiler and the Cass-suit as alt-costumes, but I'm not sure how likely that all is. I'd also like to see Joker return as a playable challenge map character (especially since, as an XBox owner, I never got to play his maps the last time around), and I wouldn't mind playing as Talia or Ra's. In any case, some new characters for the challenge maps seems like the most likely route for DLC.

New Challenge Maps: This seems like the second most likely route (barring "new costumes"). I haven't played through everything yet, but it seems like that Wayne Manor map is screaming for some more action. I'd love to see maps that featured other characters as well. Black Mask is great (and ought to be involved in more than just the one map that I've seen him in--in fact, another map/campaign featuring Black Mask would be a natural fit for a Batgirl download pack), but I'd love to have that battle alongside Bane as a challenge brawl--especially if it ended with having to beat the brute who broke the Bat.

New In-World Side Quests: I've loved all the missions and side quests and so forth that the game has already offered, so I'd love to see more of the same. There's still plenty of potential material to mine, with saving hostages, fighting street-level villains, and so forth. Just upgrading some of the thugs around town would be fine, but I wouldn't mind the occasional encounter with the League of Assassins outside of Wonder City, or Clayface offshoots, or Titan goons, or Bane or Killer Croc or Poison Ivy. Heck, I'd even be interested in chasing down Zsasz or...ugh, Hush again. When you swap characters, Batman says there's still work to be done in Arkham City--let's see some of it.

And, of course, my offer of lots of dollars still stands for some Music Meister DLC.

DLC Characters Playable in Free-Roam Mode: This would be my holy grail, and sadly probably won't happen until the inevitable third game in the series. But man, I'd love to zip across the city as Nightwing or Robin, knocking heads with thugs and so forth. Every time I try to imagine that this would be difficult, though, I return to the fact that Catwoman gets by pretty well for not being able to access all the same places that Batman can, and the Predator maps seem to suggest that they could move around pretty easily on their own. I don't think this is likely, but boy would it be nice.
Posted by Tom Foss at 6:10 PM No comments:

I was perusing Newsarama today, as I am wont to do, and took a look at their list of the "10 Greatest Batman Villains of All Time!" Now, Batman's got a great rogues gallery--quite possibly the best in comics (and if not, only second to Spider-Man's), so such a list should be beyond easy. In no particular order, Joker (of course), Two-Face, Catwoman, Poison Ivy, Hugo Strange, Riddler, Ra's al Ghul, Scarecrow, Mr. Freeze, organized crime (e.g., the Falcones, the Maronis, Rupert Thorne). Honorable Mentions: Penguin, Harley Quinn, Clayface, Joe Chill, Darkseid.

I didn't read past number 10. What's a clear indicator that your top ten list of Batman villains is utterly wrong and full of it? 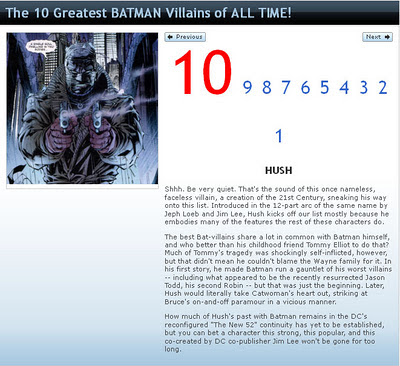