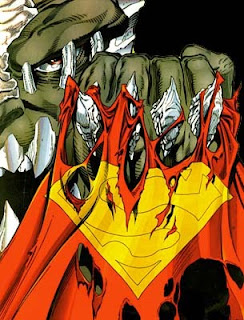 So, I watched the new animated Superman movie a week or so ago. Right off the bat, I'm glad it distinguished itself from the Bruce Timm animated series, looking a bit less like the previous incarnations of Superman than the revamped Kids' WB "Batman" season looked like the previous Fox seasons of the show. I know some were concerned that it'd be jarring to hear new voice actors doing familiar-looking characters, as it was when they nonsensically replaced the Penguin in "Mystery of the Batwoman" or half the cast in "Superman: Brainiac Attacks" (note: I still haven't seen and don't plan to see the latter). The animation and character designs were different enough from the DCAU to make the voice changes unnoticeable. I also liked that the designs had a certain '90s sensibility to them--Clark's face and style, Lois's brown hair, little touches like that. My only real problem was that it ran into some of the animation problems that plagued the first season of Justice League, namely the inconsistently drawn S-shield.

I thought the voice casting was well-done; my only problem was with Anne Heche's performance in the first scene or so with Lois; it felt very stilted and unnatural, and really could have used another take.

The plot was very different from the comics, but it wasn't until I saw this that I realized just how different it would have to be, due to the crazy things that were happening in the Superman comics at the time. Consider the following important aspects of the Death and Return story in the comics:And so on. Coast City, Mongul, Cyborg's betrayal...trying to do it all justice would have led to an incomprehensible mess of a film. The fact that I was able to follow the comics at all, not knowing who the Underworlders were or what Cadmus was, is nothing short of a miracle.

And if you eliminate one thing, several others necessarily fall thereafter. Take out Lex's clone (a necessary decision, I think), and you have to remove his relationship with Supergirl, which makes her an utterly superfluous character to the story. Remove Cadmus, and you remove the whole Underworld subplot, Lois Lane's infiltration exploits, the Guardian, and Superboy. Ultimately, the plot ended up very streamlined, thanks to some of these editing choices.

I was surprised and impressed at the way they were able to roll up three of the four Supermen into a single character--a clone (Superboy) with incomplete memories and a more brutal idea of justice (Eradicator) who ultimately betrays the populace and must be taken down by the real Superman (Cyborg).

I really liked the black costume and Superman's headbanger hair (which I really don't think qualifies as a "Supermullet," it was generally drawn long all around); along with the electric blue costume, that look needs to be present in the DCU. I know the days of the dark-colored violent antihero versions of other characters (Venom, Vengeance, Strange, Thunderstrike, etc.) are over, but there's got to be someone to wear the black-and-silver outfit. Hey Kon-El, need a Kryptonian recovery suit?

Overall, I thought the film was pretty well-done. It compressed and adapted the story nicely, included some great battle scenes (and some real shocks, like with Luthor and Mercy), and more or less met my expectations. I could have done without some of the campiness of Luthor's framing monologues, but that's a minor quibble. It's no "Mask of the Phantasm," but "Superman: Doomsday" makes a decent intro to DC's newest animated endeavor.

And I can't wait for "New Frontier."

Next: An incomplete list of warranties I didn't buy!

Reasons to take away my comic blogger's license


I think that's enough for now.

When did "Smallville" jump the shark?

I recently purchased Season 5 (I stopped watching the show as it aired sometime back in Season 3, and have caught episodes in other forms since then) and I guess I'm a third of the way through or so. After episodes on vampire sororities and infiltrating strip clubs, it's become abundantly clear that the show is floundering, and probably should have ended before our intrepid heroes left high school.

But at what point did the show make its biggest misstep? I mean, the first season was pretty rough to begin with (what with the freak-of-the-week episode structure), but it seemed to hit a nice stride in the second and third seasons. What was the turning point?

Flipping through the booklet for the Season 4 set, I'm seeing loads of possibilities...