The Pipettes: great band, or the greatest band? 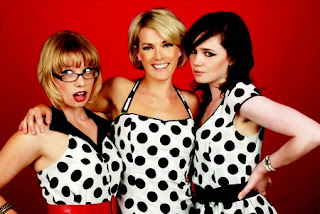 DC/Mortal Kombat: What the hell?

Recently, it was announced that a "DC vs. Mortal Kombat" fighting game would be making its way to a console near you. And all I can say to that is "why, oh dear Rao, why?"

I mean, let's start with Mortal Kombat. Everyone was all agog over the game when it first came out, way back when. I remember renting it repeatedly for my Sega Genesis, because it was frigging cool to see all the blood and do the one Fatality I could figure out how to do. Mortal Kombat 2 and 3 rode the same wave, introducing bunches of new characters and moves and ways to "FINISH HIM!!!"

But eventually, I realized that, once you got past the blood and gore and the motion-captured characters, the game was pretty damn empty. The character variety was limited by the motion capture system, so most characters were just recolored versions of other characters. The moves were easy to pull off, but combos and finishers were ridiculously hard. The game was designed more to be "cool" than "fun." Once I stopped being in Junior High, the latter started becoming more important than the former.

In order to account for this, or so it seemed, the folks behind Mortal Kombat injected an intricate plot into the series, which grew increasingly more bloated, convoluted, and incomprehensible with each game. This led eventually to the terrible, terrible idea of Mortal Kombat games that weren't straight-up fighting games.

Here's a lesson to all fighting game manufacturers: keep it simple, stupid. This (and the fun factor) is why the "Street Fighter" games are so good: they don't beat you over the head with a wannabe high fantasy plot. At most, they have the basic excuse for the characters to be fighting (a tournament) and some relationships between the characters. Or at least, that's what they had the last time I paid attention to the plot of Street Fighter. And that's a large part of why I prefer SF to MK.

Moving on, there's also the DC Comics side of the problem: fighting games with DC Characters make very little sense. They stretch the suspension of disbelief to its breaking point by pitting such unevenly-matched characters against one another. Didn't anyone play "Justice League: Task Force"? Batman should not be able to beat Superman in a fistfight, period (and Aquaman shouldn't be faster than the Flash, but that's a different complaint altogether).

It's a little different with Marvel (although not much better), because there isn't quite the same power scale among Marvel's big guns. And they can afford to leave some of those more powerful characters out of the mix--Silver Surfer and Thor didn't appear in the Marvel vs. Capcom games (as far as I can tell); they're among the most powerful characters, but not necessarily the most popular.

DC has no such leeway; you can't do a DC game without both Superman and Batman, which leaves you in the unfortunate position of having to provide an explanation for why Batman could possibly beat up Superman, and furthermore, why Superman still has his other, non-invulnerability powers, intact. The mere act of justifying the game starts moving the plot out of "keep it simple," and yet, it's absolutely necessary--otherwise, you end up with "Justice League: Task Force."

So apparently magic is involved in this new game. Which brings us to the place where the worlds collide: the bright, shiny, generally optimistic world of DC Comics, with the gory, blood-soaked, twisted world of Mortal Kombat. How in the hell are they going to reconcile these two universes without compromising one or the other? I'm sure the gameplay will be the usual style of Mortal Kombat mediocre, and the graphics they've released look all right, but what about the blood and fatalities? Are they going to be removed, rather than letting DC characters have their spines removed by ninjas? Or are we going to see DC's largely anti-killing superheroes violating their codes of honor for the purposes of the game? Will Batman be lynching Liu Kang with his Batgrapple? Will Superman burn Scorpion to a crisp? Will Wonder Woman twist Johnny Cage's head around with her bare hands? Oh, wait...

I suspect they'll remove the Fatalities, but what does that leave Mortal Kombat with? A bunch of lackluster characters, a meandering plot, pedestrian gameplay, and a series that hasn't seen success since the Clinton Administration ended? DC hasn't had the best of luck with video games, and Mortal Kombat isn't exactly the controversial cream of the crop that it was in 1993. This seems to be a bad move for both entities, and it looks like they're each hoping to ride the other's nonexistent coattails to success.

Honestly, DC Comics vs. Mortal Kombat? What's next, Grand Theft Auto: Gotham City? At least that would have some guaranteed measure of success. What the hell, DC?

Sorry folks, I didn't mean to leave things running silent for so long. If I have any readers left at all, they can expect to see my thoughts on Iron Man, Doctor Who, and Torchwood Season 1 in the near future.

In the meantime, who do you expect to be on the team in the Avengers movie? Some of them are no-brainers, but there are quite a few possibilities out there.