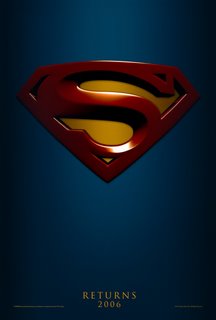 To DC Comics, Warner Bros., Legendary Pictures, Bryan Singer, and everyone else involved: Thank You.

Now, here come the spoilers. You do not want to spoil this movie. So...
I have no complaints about Superman Returns. It was quite probably, if not easily, the best superhero movie ever made. I've watched most of the first two Superman movies in the past two days, and I can say without reservation that it is the best Superman movie ever made. It might be the way it pays homage to the comics (check out the cover to Action Comics #1!) to the history (two Jimmy Olsens, 50 years apart, hugging), and to the previous films ("I hope this experience hasn't put you off flying. Statistically speaking, it's still the safest way to travel"). It might be the way it manages to make the action scenes frantic and suspenseful, without letting them become jumbled messes (which was a problem in Batman Begins, sadly). It might be the fantastic score, which at once sounds fresh and timeless thanks to all the use of John Williams's theme. It might be the way that this film ditched the "epic saga" approach of the Donner movies, instead taking a more heartfelt, emotional route. It might be the little touches, like the fact that there's no flying sound effect. But I think it's because the story kept me guessing.

That's right: I had no idea what was going to happen. When I read a Superman comic, I know he'll be all right in the end. When I see a villain's plan from start to climax, I usually can figure out from the clues and foreshadowing how the hero is going to win.
I had no idea how Superman was going to get through this one. Not a clue. I actually believed he might die. I haven't thought Superman might actually die since I was 9 and reading Superman #75. And even then, I doubted it. This? This was perfect.

What about the Christ imagery, you say? It's there, from Pieta to Crucifixion to Resurrection. The "gay Superman" angle? Yeah, that too, in a Matthew Shepard sort of way. Is Routh good as Superman? Routh is Superman, at least as much as Reeve was. Everyone is top-notch; not a wooden actor or phoned-in performance in sight.

It's fantastic. It's superb. It's got me anxious to see it again, to buy the DVD, to see the extended edition. I want to see this in IMAX. I want to memorize this film and burn it onto the backs of my retinas. It's JUST THAT GOOD.

I'm going to be gushing about this movie all week. Expect a lot of spoilers-below-the-fold posts.

If you haven't seen Superman Returns, for the love of Rao, don't click this link.

I'm quite late to the party ("party" in this instance meaning this post), but I wanted to say it was nice to find another soul out in the comics blogalaxy that felt the same way I did about the movie.