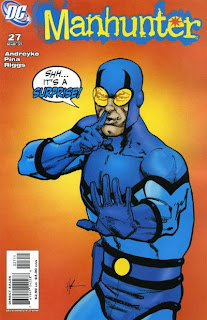 Let me just say that I love this cover trend. The "spoil the big surprise that happens on the inside" trend, I mean. It's not common, but this issue of Manhunter and the issue of 52 that revealed Supernova's identity really hit it hard.

Retailers are complaining, and rightly so, about Marvel's treatment of them with the whole Captain America #25 fiasco. If retailers had known in advance (say, around solicitation time) that the issue would be the subject of a media blitz, would contain the death of an American icon, and would contain what many are calling the "real ending" of Civil War, they would have ordered far more copies of the book than they did. As of now, everyone is sold out, and the speculator market which has driven the price of copies on eBay over a hundred dollars will have all but disappeared in two weeks' time when the reorders arrive. Marvel apparently "had no choice" but to keep retailers in the dark, and some are rightly calling shenanigans.

The last time there was anything near this level of media coverage for a comic book event was with the Death of Superman (with little blips at Superman's wedding and the start of Civil War, and a somewhat bigger blip with Superman's power change). Retailers knew well in advance not only that Superman was going to die, but which issue would contain the death. When I heard about it, my dad took me down to whatever the local comic shop in Cuyahoga Falls, Ohio, was in 1992, and we got put on a waiting list for Superman #75. As far as I'm aware, there were plenty of copies to go around (which didn't stop them from skyrocketing in value, for awhile), and there was still a huge amount of media attention on the event.

What would Marvel have lost if they'd told retailers "in this issue--Captain America falls"? It doesn't spoil the ending of "Civil War" (Cap could die in victory or defeat). It doesn't tell you anything about how he dies. It only tells you "hey, order more of this issue."

Well, that's a lie, or at least an oversimplification. I know that if I'd seen that in the solicits three months ago, I would have thrown up my hands then and said "that's it, no more Marvel, this is bull$%*!" as I more or less did yesterday. And I'm sure I wouldn't have been alone in that regard. But that's just a further consequence of this problem of the neverending event. Whether we discovered this yesterday or three months ago, it would have felt just as tedious and unnecessary. They've made themselves so dependent on The Event, that last-page twist, that it takes precedence even over the people buying comics, even over the need to attract more buyers, even over the goodwill of the retailers who distribute the product.

And that is what I so love about this cover-spoiler trend: it takes the focus, and thus, the pressure, off of that last-page reveal, that cliffhanger, that twist, that Event. But when you remove the immediacy and urgency from the Event, when you take that twist away, what are you left with? What fills the void?

Well, my friends, the same thing that caused me and countless others to head to their comic stores and purchase Superman #75. The same thing which led people yesterday to seek out a star-spangled superhero when they've not picked up a funnybook in years. The same thing which should take precedence in any and every comic: the story. I may know that Superman is going to be dead by the last page; what I want to know is how he got that way. The fun part of the Supernova mystery isn't the reveal, it's the months of speculation and deduction and guessing and second-guessing that led to it. The important part of Blue Beetle's return isn't that he's alive again, but how he got that way and whether or not it really actually truly is him. The important part of the Event is the story leading up to it. When the ending, the twist, the last-page reveal is the important part, it's the sign of an otherwise hollow, empty story. It's why M. Night Shyamalan films are so flimsy, why Marvel's output has been so creatively thin; yes, there's something to be said for the surprise, but The Empire Strikes Back is a good movie whether or not you know that Darth Vader is Luke Skywalker's father. The destination's nice, but what's really important, as any fortune cookie or kung-fu sensei will tell you, is the journey.

There are two things to really admire about the cover-spoiler, then. The first is the sheer ballsiness of it: it says "yeah, there's a shock here. We could milk that, but we feel so confident about the story that we don't care about the shock value." It drips confidence. And the second is that it recognizes the harsh-yet-optimistic truth of comic book fandom: we all already know how it's going to end. When you pick up an issue from Marvel or DC, of some hero who's been around forever, you know that they're not going to die from falling off that cliff, you know they're not going to really leave their costumes in the garbage can, you know that the villain, laughing triumphantly on the last page, is going to get his comeuppance. Because deep in our hearts, we know the basic truths about shared-universe superheroics (one-shot stuff like Watchmen or Elseworlds can play with this a bit):And so on. We know when we buy Superman #75 that there's going to be a #76. And despite Joe Quesada's protesting too much, we know when we see Steve Rogers take three bullets to the gut that he's going to get better. The cover-spoiler recognizes that basic fact of superhero comics: we've seen it all before, and whether or not we acknowledge it, we know how it's going to end, in nearly all cases. Putting Blue Beetle or Booster Gold on the cover is the author's way of making a silent, understood deal with the reader. "Here, I know that you know how it ends," says the cover. "But come along for the ride. We'll have a blast." There is some truth to that dismissive "once you've read one superhero comic, you've read them all," but that's not necessarily a bad thing. The writers open up the toybox and say "here are the toys and here are the rules, and we're going to put them back in the box when we're done, but in the meantime we're going to have some fun."

And the other half? It's seeing bullets bounce off of Wonder Woman's bracelets. It's seeing Batman descend, cape extended, from the shadows. It's seeing Wolverine say "I'm the best there is at what I do, bub." It's seeing Captain America bounce his shield off the heads of half a dozen Hydra soldiers. It's seeing Superman save the day. It's seeing exactly what you expect to see, exactly what you buy superhero comics to see, it's seeing the moments that make you want to tie a towel around your shoulders and wear Underoos. It's when all your critical faculties suspend and all your maturity experiences antigravity, and for a moment, you might believe that you can fly.

And those are the Events that really matter.
Posted by Tom Foss at 8:27 PM

Great post! Your point about playing with the rules holds in regular continuity, but there's another set of rules for alternate continuity stories like, say, 'Universe X'...where Cap's "actual" death could carry an emotional resonance that it never could in the ongoing monthly, where we all know it's temporary/reversible.

I also have to say that I'd rather see the Universe X treatment than Cap getting sniped like a common pigeon. Not very comic-booky at all.

Right, and that's more or less what I meant by Elseworlds and One-Shots. The rules are different in a "What If...?" story, but still come in recognition of the conventions. The Imaginary Story/What If/Elseworlds says "we know we can't do this normally, but here's what it might look like if we can," and more often than not, it says "aren't you glad we can't do this normally?"

Oddly enough, I have the opposite reaction...I stopped reading monthlies years ago, but have been drawn to keep getting interesting one-shots like Kingdom Come and Earth X, etc..
I enjoy the stories where things change, and then the slate is wiped clean for another one-shot. Strange and perverse, I know, but these are the only comics that have intrigued me for a long time now.