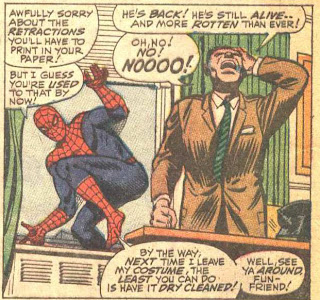 And, like Spider-Man, the status quo is restored in the next installment. Long-time readers might have noticed my reference to last year's April Fool's spectacle, Comix Are Suxxors. Incidentally, if I'd had more time and more ideas, I was going to resurrect the Suxxors page, but the only article I had was "Spartans R Totally STR8!!!" Between that and the "giving up comics forever" stuff, I thought I made it a clear-but-not-too-obvious joke. Honestly, if I were going to give up blogging, I'd wait until after April 1st to do it.

Sadly, though, most of the post was absolutely true. I have fallen behind in just about everything, the floppies and trades are piling up next to my desk, I have been procrastinating when it comes to the blog, and I do feel bad about breaking all the various promises and recurring features I've made over the months. But I'm not going to give up, I'm just going to redouble my efforts, hit 'em hard and fast, but...but you're dead!

Sorry, got caught up in my comic book clichés there.

And comics now are anything but suxxors. Yeah, I'm getting a little tired of the blood and gore in 52, and mainstream Marvel is pretty much dead to me, but there's so much to love, too. Just in terms of series, how can I leave comics when Superman and Action are better than ever, when I'm actually regularly buying Batman and Detective, when Immortal Iron Fist even exists, when Birds of Prey is featuring the Secret Six and undoing one of the Justice League's greatest injustices? Comics are good, just as they should be.

Which isn't to say that things are going to get any more regular around here. I still have a bunch of posts planned, and I still want to finish the increasingly late Black Comics Month, but my schoolwork is really eating my time. I've got a few things on the burner, and I'll keep stirring and poking at them when I have the time, but it looks like it's going to be pretty sparse here until June.

That being said, I do have some things to say about General Zod, Stan Lee, and the idiocy behind the Avengers' first meeting, among...well, the usual. I've never run out of things to say, and not having a reason has never stopped me before.

How can something so big move so fast?

If it was only so easy to bring Freakazoid! back...

BoP and Secret Six! I'm so with ya on that one. You might have seen my slobbering ode to meeting Gail Simone (and her hubby) at the NYCC. It was like meeting Oracle!

Okay, how'd you sneak back and I miss it?

My feedreader is perfect. PERFECT, Damn it!