You may recall that I was all sorts of super-psyched about Countdown, even after a lackluster first issue.

Well, after two more lackluster issues, I'm less psyched. Significantly less psyched. First, I don't like the Monitors. I mean, I dig that they're the continuity cops of the New Multiverse. I hope that they come into conflict repeatedly with Rip Hunter and Booster Gold. In fact, I hope that the driving force in Booster's book is the conflict between Booster and Rip's "let the multiverse continue in its natural state, but let's keep the people from knowing too much about it" attitude, and the Monitors' prescriptive desire to control and dictate what the timelines should be.

But that doesn't mean I want to read issue after issue about the Monitors, particularly not when far more interesting characters, like Jimmy Olsen, are around.

Second, I'd prefer not to be reminded of Emo Freeman and the rest of the Melancholy Marvel Family. And that means that I don't really care about suddenly-snarky Mary Marvel and her turn to the dark side because the boys in the family have decided to hang the "he-man women haters" sign on the Rock of Eternity.

Third, I love Jimmy Olsen, I really do. But Jimmy Olsen is a goofball kid photographer with an overconfident streak a mile wide and a tendency to think he's a lot cooler and smoother than he actually is. None of that amounts to "knowing the secret identity of two of Batman's former sidekicks, and therefore probably knowing Batman's secret identity." I'll believe a man can fly. I'll believe a boy can stretch. I won't believe that Jimmy Olsen could know Batman's secret identity when he can't even figure out that his the only difference between his two best friends is a pair of glasses.

I'm still hopeful about the secrecy of the Multiverse. I don't think that Duela knew about the new Multiverse, only that she (like Power Girl and various JSA members) remembered the old one. So far, who knows? Can we get a running count? Off the top of my head, the following people all know about the current Multiverse:Is that it? Does Red Tornado know? In any case, it looks like that's still got a pretty tight lid on it, and I hope it stays that way.

But even the mysteries here don't really impress me. Okay, I'm jazzed about the search for Ray Palmer and anything involving the New Gods, but "Who Killed Joker's Daughter"? "Mary Marvel's Heel Turn"? "How Black Adam Got His Groove Back"? Somehow, not as interesting as the Everyman Project, the mystery of Supernova, and the Space Odyssey. 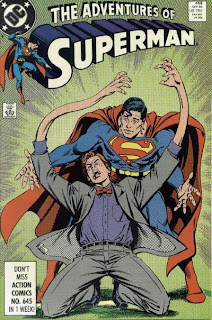 I'm a bit curious about Jimmy's newly-rediscovered elasticity. The last time we saw anything like Elastic Lad in the current continuity was--and correct me if I'm wrong--way back when the Eradicator altered Jimmy's genetic structure, allowing him to stretch (with considerable pain). Presumably this isn't a remnant of a resolved plotline from eighteen years ago, and we haven't seen the Eradicator lately, so I wonder how the bowtied bouncing boy came to be this time around. Maybe the universe decided that if Jimmy was going to play redheaded detective, he needed to do it with some Gingold in his system.

And you know I love the Flash's Rogues. Especially Piper, actually, who I tend to prefer as a hero. But I have to ask: why are Piper and Trickster getting all the flak for turning good, and Heat Wave isn't? Heat Wave was the hero of the Quad Cities for years (a distinction only shared by Wild Dog and myself)! So, what, the Rogues accept his "the Top warped my brain but I'm okay now" story, and not Piper and Trickster's? Trickster worked for the government! If that doesn't seal his evil credentials, what does?
But despite my love of the Rogues, their arc so far leaves me cold. Without the Flash--specifically without Wally--they just aren't that entertaining.

And besides all that, the art in Countdown started good, but has gotten steadily worse with each issue. I'm not the sort of person who spends a lot of time analyzing comic art; I only tend to notice it when it's really good or really original, or when it interferes with my enjoyment of the story. And for the last two issues, it's been very much the latter.

I'd like to say that I'm going to stick it out, that I'll be reading Countdown right up until the end as I did with 52, but I just don't feel the same urgency with this book. With 52, I read each issue immediately, as soon as possible. With Countdown...I mean, I just read it today, and that was mostly because I forced myself to do it. I love Paul Dini, but this book needs to shape up real quick, before it flops hard.

A lot of people already know about the Multivserse, or are about to figure it out.

- Capt. Atom, Ion: they know about the Bleed. Kyle met a Monitor. The Guardians will tell him eventually.

- Doctor Sivana: Rip's fault, when he stole some Suspendium from Sivana's lab in 52 #52.

- The Dominators: Booster's fault, when he stole some sort of weapon from them in Supergirl and the Legion of Super-Heroes.

- Hank Henshaw: he "knows the Guardian's secrets," so he learnt about the 52 universes.

- Joker: knows something is 'wrong' in the Universe. Not much else.

T.O. Morrow and Hank Henshaw are locks for it, and I managed to forget both of them. Sivana has some idea about it. Joker might just know that some people don't belong on this Earth. The Tangent heroes were an anomaly...we don't actually know which of them are actually alive, if any. The Dominators don't actually know what the "fifdeetu" is--they just used Booster's words to name the 'attack' which incited their war against the UP. So that's, at most, 3 added onto the list. Disregarding the Guardians and the Monitors, that leaves about a dozen people in the Multiverse who are aware of its existence.

That's a number I can live with.

Jack Knight is in Countdown? Hey, maybe I should be giv...oh wait you mean the new guy. Whats his face from the LSH and Wanderers. Thom, I think...

Countdown is supposed to have a rotating roster of writers, right? Maybe it'll get better when the new blood comes on.

I won't be following along, tho'. I cut my subscription short after the first issue (the FLCS guy put it on my pull list without telling me... :P); I'm just not up for another weekly series.