You know, you'd think that a civilization of super-advanced robotic life forms, with the highly advanced technology necessary to travel across vast interstellar differences and then alter their bodies so they can disguise themselves as native technology or life forms, would be able to do basic things like voicebox repair. A little rewiring, a little soldering, and any physical or psychological problem should be easily remedied. Unfortunately for some Cybertronians, this simply isn't the case; they're cursed with physiological or psychological speech impediments that range from being annoying to rendering them almost totally incomprehensible. Today, I'm saluting those brave sparks who soldier on in the face of adversity and utter confusion. 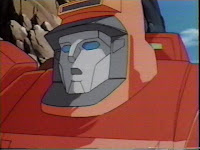 10. Wheelie: Wheelie's speech is quite distractive;
Though not much of him is attractive.
He's just a child, this Autobot,
Armed with some sort of slingshot.
Compared to his toy, though, he's blessed
Because his head's not in his chest.
But making him rhyme? Why that, methinks,
Makes him Transformers' Jar-Jar Binks.
Still, we should pity, not loathe, this rhyming whiz;
I mean, he can't even say what color he is! 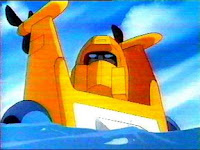 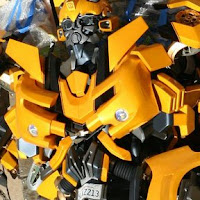 8. Bumblebee: And now, it's the top eight at eight! *kxxskt* Number one in the box office this week, the movie Transformers...*kxskxt* A first for the young player--*kxxst*--the next generation Chevy Camaro, priced at--*kxxst*--have trouble speaking? Shortness of--*kxxst*. All we hear is radio ga-ga. *kxsxxt* 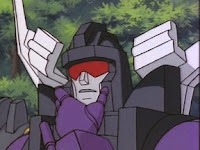 7. Shrapnel: Shrapnel has a pretty unique quirk quirk. See, he always repeats the last word, or last few syllables, in his sentences tences. He's the leader of the Insecticons, which makes him a fairly forgettable character character. I'd actually forgotten about his speech pattern when I saw the first Transformers Movie again several years ago ago. He says a line to another Insecticon (Kickback, I think), "a little heavy on the electrons electrons." For quite some time afterward, I wondered why an Insecticon would be named Electron, until I was corrected ected. These days, I like the Insecticons a lot more, even if their toys didn't look very insect-like like. 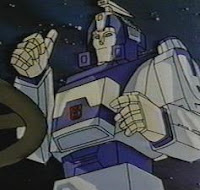 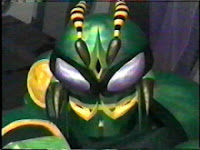 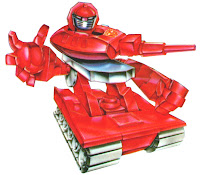 4. Warpath You already BLAM! met Warpath in this BOOM! series. The diminutive tank KAPOW! appears to have some sort of cyber-Tourette's, where CRASH! he peppers his speech with '60s-Batman-esque sound effects. POW! ZAP! BANG! He also has a kind of southern accent KABOOM! which is strange, considering he's from another planet. Then again, the same could be said for most PREEEOW! sci-fi.

3. Wreck-Gar: Bah-weep-Graaaaagnah wheep ni ni bong? Wreck-Gar and the Junkions learned English from humans' television broadcasts. As a consequence, they tend to sprinkle classic TV catchphrases in their speech, like "Lucy, I'm home!" or "one of these days, Alice" or "you are the Weakest Link, goodbye." Well, not that last one, at least, not in the '80s. Chances are they've probably worked their way up to "did I do thaaaaat?" and "not the mama!" by now, depending on how far out they are from Earth television signals. Who knows, maybe they've progressed as far as "simmahdahnah" or "who let the dogs out?" One thing's for sure, though: once there's an entire relatively advanced alien planet saying "Git-R-Done," we can reasonably expect a merciful and swift end to the universe.

2. Grimlock: Me Grimlock no have problem talking! Me Grimlock kick butt! Grimlock is strongest Autobot, Grimlock not need fancy words like weak Optimus Prime. Me Grimlock say freedom is right...and Decepticons is wrong! Talking am waste of time, me Grimlock want action! Want to bust Decepticon heads! Me Grimlock bust heads more gooder than anyone! 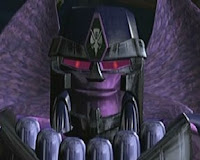 1. Megatron: I don't know if constant monologuing could be considered a speech impediment, but no one can drag out a three-letter word for four syllables without something being wrong. Yessss.

This was SO fun to read.

Its so full of win, so beautiful...

So where's Soundwave (if he was the one w/ the vocorder voice)? I had the damnedest time trying to understand him back then.