Who Wants to Watch the Watchmen?

I've not been paying much attention to the news about the "Watchmen" movie. I don't expect it to be good. At all. I mean, the fact that Hollywood managed to botch something as cinematic and deceptively simple as "V for Vendetta" doesn't give me high hopes for the fate of comics' most oft-mentioned maxi-series.

So the costume shots came out recently, and while I don't have much of a problem with Nite-Owl and Rorschach (and while I wonder how they're going to pull off Dr. Manhattan), I was really surprised by this: 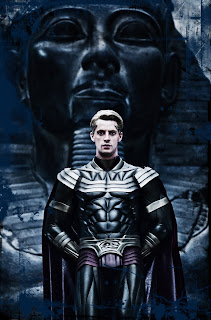 Holy Hera, that's an ugly costume. I didn't even realize that it was Ozymandias at first. I mean, that's Joel Schumacher ugly. It even has nipples. NIPPLES! Have we learned nothing? People (i.e., Peter David) are apparently saying that this trend in superhero costumes is so the movies don't look ridiculous like the old Batman show; don't people realize that this is just a different flavor of ridiculous?

There's not much more to say about that; I can't find a single redeeming quality about that costume. It's ugly, it's impractical, and worst of all, it doesn't make any damn sense.

I don't know if it's the costume itself or just the mood of the still, and it could be because I've READ Watchmen, but that still looks to me as though it's screaming "HEY! I'M THE VILLAIN!"

I think the one that I take the MOST issue with (at least before you pointed out the nipples) was Nite-Owl, simply because he looks as though he's a generic superhero movie character and not the pudgy middle-aged guy who appears in most of the work (I'm willing to accept that this still MIGHT be from one of the flashbacks).

I wonder if the Ozy-nipples are perhaps proof of Sterling's proposal, that perhaps in lieu of attacking superhero comic cliches, the film will attack superhero MOVIE cliches?

but that still looks to me as though it's screaming "HEY! I'M THE VILLAIN!"

No, no, totally agreed. I thought about mentioning that, but the post was long enough already.

The Nite-Owl costume does look pretty generic; it seems like (for that design, anyway) there needs to be something more on the chest to distinguish it. Oh, and the helmet blows.

I like Mike's idea, but it seems like a shot in the dark. Even so, if this were attacking superhero movie clichés, then wouldn't it be the wannabe-superhero (Nite-Owl) or the would-be badass (Comedian) in the nipple-armor? Shouldn't the "villain who's above the heroes in every way, but actually appears to be the hero until the end" be dressed in something more classic? Even a variation on the Superman Returns costume seems like it would make more sense, and would be better misdirection.

Agreed -- so far, I'm not buying the "send-up of Schumacher" thing. Also, really -- how much in the way of superhero-movie cliche is there, these days?

Yeah, I kind of noticed that too. Like, why are his legs attached like an old-school action figure, t-pelvis and all?

Ah, geeks. Will you ever just see a movie and not bitch about it until the final credits roll? I doubt it. The costume could work out just fine. The other "action" shots that have been shown look straight from the comic. Just wait for the movie to actually be projected before you complain about it sucking. If you don't want to see it then wait for DVD. If then you still don't wish to see it...well, nothing lost.

Ah, anonymous commenters. Will you ever just visit a blog and not bitch about the posts until you've put some thought into it? I doubt it. If you don't want to read it then go somewhere else.

Note that I never "bitched" about Superman Returns or Batman Begins or Hellboy. Note that my reviews of Spider-Man 3 and X-Men 3 bend over backwards to delineate both the good and bad parts of the films. Note that I haven't been bitching about The Dark Knight or Iron Man, because they look fantastic.

No, I'm "bitching" about Watchmen because it'd be a hefty undertaking for anyone. I have never thought the story would work well as a movie, and I have been consistent in that appraisal. The other Alan Moore adaptations would seem to agree with me. But when I already think that the movie won't be any good because of the nature of the material to be adapted (and Hollywood's consistent lack of success in adapting Alan Moore pieces) and something as hideous as that Ozymandias costume comes along, it really just confirms my preconceptions.

So no, I won't stop "bitching" until the credits roll. I don't need to eat the whole egg to know that it's rotten.

Man, you post insanely long posts that is full of nothing but drivel. Same old smug 20 somethings that think they know everything. It's like you're postings on heman.org...they're way too long and full of nothing.

You may not have bithced about Spidey 3 because you perhaps felt the movie looked great from the trailers. Then, you go in and see it and "BAM"...not as good as you thought.

Just stop juding the movie by 7 lil pics that have been released. If you don't see it, great! Just another fanboy that has nothing better to do then complain about all things geeky.

I'll make this brief then.

Your inability to read more than a few words without facing terrible brain trauma doesn't mean my comments are "full of nothing."

I suppose I should follow your model, and write short, misspelled comments full of nothing. Well, full of something, but I don't use that kind of language here.

If you don't like what I have to say, don't read it. Or, you know, go fornicate yourself with a rusty spoon.

Got to love it...you make an attack with a sexual innuendo. Poor lil baby. You really have the immaturity that I expected. It reiterates that you act like a 20 something know it all.

So wait, am I a baby, or a 20-something? Could you at least get your insults straight? Or, failing that, your spelling?

In trying to criticize me for judging too quickly, you've judged my entire blog based on one quick post. In trying to call me pathetic, you've exposed yourself as the truly pathetic one. And you've done all this behind the veil of anonymity. How very mature.

It's great that you attack spelling when i've only made one mistake. Yes, I used you're in place of your. Many, many of your blogs contain spelling errors, as well as posts on he-man.org. You aren't perfect. Far from it. You're just a smug lil boy that tries to act high and mighty. You're arrogant on the org and arrogant on here. Just another "know it all" that will have a wake up call one day. You'll find you aren't the all knowing brain you think you are. Until then, post your nonsense. It'll be fun to read them on here and on the org and notice all of your inconsistencies and nonsense.

Last I checked, "bithced" and "lil" were not words, the latter not without at least some form of apostrophe. Should I pull out your inept use of grammar as well?

You make claim after claim, with no support. Many of my blogs contain spelling errors? Considering that I only maintain two blogs with any frequency, I hesitate to think what "many" would constitute. Perhaps you meant "blog posts," in which case, kindly point the mistakes out, or kindly shut your trap.

You're just a smug lil boy that tries to act high and mighty.

And you're just an annoying little troll who thinks that I give a flying fig.

It'll be fun to read them on here and on the org and notice all of your inconsistencies and nonsense.

Ah, more unsubstantiated accusations. Care to put any money where your mouth is? No, of course not, you're just going to continue to fling poo from behind the wall of anonymity. Put up or shut up: back up your claims, offer something worthwhile, or get the hell out.

By the way, it's the height of arrogance to come to someone else's page and tell them what to do on their own site. Glass houses, anonny.