I mentioned in an earlier post that I'd liked when the Superman comics embraced Toyman's creepiness and made him into a schizophrenic murderer.

But as Will Staples aptly noted in the comics, the animated series did the "creepy Toyman" much, much better. They kept the "emotionally-stunted manchild" aspect, but jettisoned the tubby guy in the striped suit for a small guy dressed as a toy, with a creepy painted-on smile. 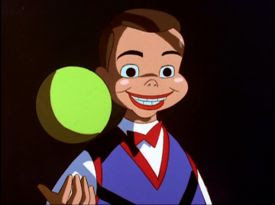 Yeah, that's him. So, naturally, I was psyched when the Toyman was reintroduced in the "One Year Later" Superman arc, modeled after the animated version. It wasn't the first recent attempt to revamp Toyman; Greg Rucka did something with the Zatanna mindwipe not too long ago, but I don't think Toyman appeared again until OYL. This was a much more drastic change for the character, though I kind of wonder what Rucka might have done with him if he'd had more of a chance. 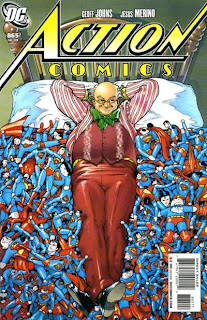 More recently, Geoff Johns gave Toyman yet another revamp. And I have to admit, it's the best of the three. Apparently Geoff Johns noticed, as I did, that the Jurgens revamp turned Toyman into a Batman villains, and the recurring theme of Schott's conversation is how he's a "Superman person, not a Batman person."

Schott reviews his history, from his beginnings as a sort of Willy Wonka figure through his natural progression to creepy homicidal maniac (not much of a stretch, really). He reveals his protectiveness of children and his desire to punish bad people. Moreover, he reveals that all the other variations on his character--Hiro Okamura, Jack Nimball, the Animated-style Toyman, and even the Jurgens revamp--were incredibly advanced robotic duplicates of himself. The last one, the one who killed Adam Grant and went a bit schizophrenic, had a glitch or three in his programming. The voice he heard, his "Mother," was actually Schott trying to regain control over him. It may be moderately cheap to try to absolve Schott--still a homicidal maniac--of the fifteen-year-old murder of a C-list supporting cast member's kid, but at least it's done in a clever fashion.

So we end up with a more nuanced sort of Toyman, but without invalidating the ones that have gone before (and in fact giving them all the ability of coexisting and adding new wrinkles to each of their characters). It's a good move on Johns' part, and I hope these villain-spotlight issues continue; they were one of the best parts of his Flash run. In fact, about the only thing I don't like about this Toyman revamp is that it seems to be the same concept as what he's doing with Brainiac. It fits, at least to some degree, with both characters, so it's not too much of a complaint. In the long run, this means that there are a lot more possibilities for good Toyman stories, and that can only be a good thing.

tried to contact you to suggest blogroll link swap but your contact info doesn't work
Love it if you could contact me
this is my blog
http://www.thesupermanclub.com

The one thing I didn't like about Geoff Johns's Toyman story is that I actually kinda liked Hiro, and him being retconned into being just a robot rankled me. He was pretty much the only thing I liked from the Loeb run on Supergirl.

Besides that, though, it was an enjoyable story, and Johns gets Toyman better than anyone else at DC ever has. The symmetry with the Brainiac story bothers me, though, because I don't think Brainy really needed fixing.

And by "Supergirl", I mean "Superman/Batman".