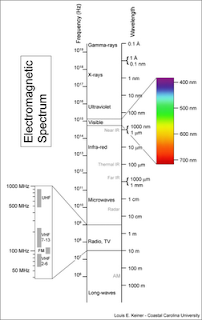 I've been of two minds about the whole "emotional spectrum" idea running through the Green Lantern comics of late. My analytical, scientific mind scoffs at the notion. The electromagnetic (EM) spectrum is vast, ranging from radio waves on up to gamma rays, and the visible spectrum is a tiny sliver of it. Moreover, it's a tiny, arbitrary sliver--that it's the only part of the spectrum which humans can interpret visually is an accident of biology, not some fundamental property of the universe. Other animals just here on Earth can view different swaths of the spectrum--bees, for instance, can see into the ultraviolet. In a universe as densely populated as DC's, with beings that can see well into the X-Ray and Infrared ends of the spectrum, it seems silly to single out light with wavelengths between 380 and 760 nm as having particular cosmic significance. It's the kind of anthropocentricity that makes humanoid the default body design among alien races and makes Earth into an effective weirdness magnet. It's understandable from a storytelling point of view, but not really a scientific one.

However, my comic fan mind thinks the idea is really cool, and can't wait to see how it plays out. The fact that there's an upcoming Blackest Night: Superman miniseries gives me hope that my prediction about the Man of Steel will be coming true.

It's not often that my comic fan and scientist mentalities agree and live in complete harmony. Most of the time, they're pretty well separate, but occasionally one of them screams under the oppressive weight of too much suspended disbelief. So when they actually agree on something, it makes me giddy in a very geeky way.

See, the Controllers recently decided to lay claim to the Orange Lantern and the power of greed. It's a natural choice for them, being the self-serving isolationist cousins of the Guardians of the Universe. But this isn't the first time the Controllers have aped the Guardians' corps concept. They've made two other attempts: the Darkstars and Effigy.

So far, so what? I'm not entirely sure what sparked the idea, but a comic fact surfaced from the trivia sponge that is my brain: the Darkstars' main weapon was a maser, which isn't just a misspelled laser. "Maser" stands for "microwave amplification by stimulated emission of radiation" (laser, is the same acronym, but with "light" instead of "microwave"). What exactly masers do (and what the Darkstars' fictional masers did) isn't important; what is important is that microwaves are a form of electromagnetic radiation, with a long wavelength that puts them between radio waves and infrared light.

Effigy basically had the same powers as a Green Lantern, except instead of green willpower plasma forming his constructs, he used fire. Fire itself isn't a form of electromagnetic radiation, but it does give off quite a bit of it. Most flames give off visible light of various frequencies, in addition to lots of radiant heat in the form of infrared light, which is just outside of the visible spectrum on the low frequency side. Moreover, flames are plasma, and probably the plasma* we're all most familiar with (with lightning and certain HDTVs coming in close behind).

What this suggests to me is that the Controllers have been trying to tap into the emotional spectrum in the same way that the Guardians have, but with less success. Their first attempt gave them troops with weapons based on the low-energy end of the EM spectrum, and no apparent plasma-construct abilities or emotional ties. Their second attempt was closer to the Corps model, with the ability to wield plasma-based constructs, but there was no clear emotional tie. Effigy's constructs would have emitted all sorts of light from the low-energy end of the EM spectrum, primarily red, orange, and yellow--suggesting a mix of rage, greed, and fear. Most of the emission, though, would have gone to infrared light, which is just outside the visible spectrum and apparently outside the emotional one as well. Having failed twice to create their own corps of warriors with the emotional power and purity of the GL Corps, the Controllers (some of them, anyway) abandoned their development efforts and tried to assimilate a ready-made Lantern.

I like the way this all falls together. The Controllers' efforts clearly show some progress toward the Guardians' model, and I suspect that a lot of the Guardians' early success has to do with their dabbling in magic and getting some celestial assistance. I think this is a rich area to mine for further stories about the emotional spectrum: do microwaves and infrared light have emotions associated with them? What about X-Rays and gamma rays? Since the low-energy end of the spectrum seems to be devoted to "negative" emotions (rage, greed, fear), might we see infrared correspond with lust or envy? Could ultraviolet light or gamma radiation be associated with providence or charity or self-sacrifice? As the spectrum stands, the emotions become more personality-altering and consuming as one moves away from the center, with the Red Lanterns and Star Sapphires losing most of their individuality; would we see the same trend continued as one moved beyond those extremes, or would there be some kind of drop-off, or perhaps just a more subtle consumption of individual personality? Could Air Wave, whose powers fall at the extreme low-frequency end of the EM spectrum, be affected by the emotional spectrum?

Like I said, there's some rich material to be mined there, if a bit mired in science geekery. While I think it'd be interesting to discuss the Controllers' previous efforts in terms of the emotional spectrum, the implications would open up several new storytelling opportunities.

There's also the possibility for further connection to other fundamental aspects of the DCU. There are several core principles guiding the DCU--Order and Chaos, the Endless (yes, they're Vertigo, but they get referenced often enough in-universe--see "Identity Crisis," for instance), the Elemental Realms (the Green, the Red, etc.), the Seven "Deadly Enemies"/Seven "Sacred Virtues" of Man, etc.--and I don't think it's too early to suggest that the Emotional Spectrum is another such principle. While I don't know that I'd want to see a Grand Unified Theory of DCU foundational principles, I don't think it would be ridiculous to mesh a few of them together, draw connections, and so forth. The easiest place is with Shazam's "Deadly Enemies"/"Sacred Virtues," since several of them (Greed, Wrath/Rage, Hope, Fortitude/Willpower) are already represented along the Emotional Spectrum. Endless Nights gave us at least part of the connection between the Spectrum and the Endless, and it wouldn't be hard to claim that Order reigns in the center, but Chaos takes over at the extremes. The door to Elemental connection is most clearly open through The Red/Red Lantern connection, since nature is "red in tooth and claw," ruled by base animal instinct and driven by the need to survive.

I'm just riffing here at this point; I don't claim to be able to unite all these, but I think a good attempt to do so would weave the tapestry of the DCU a little more tightly together. This is the task for the Geoff Johns of the next generation, assuming that the Geoff Johns of our generation isn't already working that way.

One last thought: We have the color spectrum, but one ring doesn't fit**. The Black Lanterns presumably represent death; black isn't a color on the spectrum (it is, in fact, the absence of color), and death isn't an emotion. This suggests to me the existence (or climactic discovery) of the White Lantern, which would obviously represent Life. White, as you'll recall from middle school science, is made up of all the colors of the spectrum. Any guesses how Blackest Night is going to end yet? Or who the White Lantern will be?

*Plasma is a state of matter (like solid, liquid, and gas), in which a gas has been partially ionized, stripping the electrons from the component atoms and molecules and allowing them to move around somewhat freely. It's not to be confused with the liquid part of blood, which shares the same name.
**Okay, at least one ring doesn't fit. "Willpower" isn't an emotion, after all. The only reason it makes sense at all is because it's at the center of the group.
Posted by Tom Foss at 10:16 PM

I confess, I glossed over a lot of this because I don't give a whit about what's happening in the DCU.

But your post reminded me of something I've always found pleasantly curious: That the classical Greek "elements" of Air, Earth, Fire and Water so very nicely correspond with the four states of matter: Gas, Solid, Plasma, Liquid.

(Sure, at this point some wiseguy is gonna mention the Bose-Einstein Condensate and how it's the fifth state of matter. OK, true enough says I, but it's not observable to the naked eye, and besides I defy anyone to explain what that sucker is in simple terms.)

So, wouldn't it be keen/weird/funny if there was another axis to the power rings, one that ran on state (amplitude?) and not frequency?

Verification word: Thrutp. A sound effect gone horribly wrong? When your power ring goes "thrutp" you know you're in trouble...