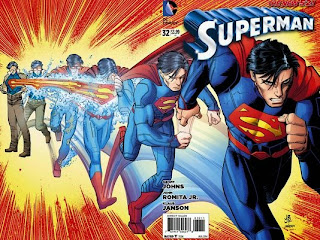 Altogether, it's a positive start. I'm really looking forward to the next issue, especially seeing some development on these subplots. I hope there's some follow-through on the promise of a robust supporting cast; that's an aspect of Superman comics that's too often overlooked to the detriment of the story and the characters. I'd like to see Geoff Johns letting his top-notch artists handle a bit more of the storytelling, especially outside the big action set pieces, but it's just nice to read a Johns comic where no heroes act like jerks and no one has any limbs severed. Definitely the strongest writing I've seen from Johns since the start of the New 52, and Romita knocked this first DC work out of the park. With Pak and Kuder over on "Action," this is arguably the best that the Superman line has been since the last time Johns was writing Superman regularly.
Posted by Tom Foss at 4:38 PM