How Could You Stoop Solo?

Spoilers Ahead!
For a long time, my preferred explanation for the "how could Han make the Kessel Run in less than 12 parsecs when parsecs are a unit of distance?" question was that Han is a liar. He lies. He talks fast to get out of bad situations and get into good ones, and that fast talking often plays fast and loose with the truth. He's not always very good at it...

...but it's what he does. And I maintain that the look (seasoned starfighter pilot) Obi-Wan gives him when he makes that boast is one of quiet disbelief. Han is BSing them and Obi-Wan knows it, because Obi-Wan is the Jedi Master of BS.

The people in charge of the Expanded Universe and the new Star Wars films apparently disagree. There have been a lot of tortured explanations for how the boast is actually possible over the years, and Solo canonizes one of them. But Solo goes a step further by telling us that, no, Han's an honest guy. When he lies, he's consistently bad at it. When he tells you that Wookiees are known to pull people's arms off when they lose, that's not just an intimidation tactic, Wookiees actually love to dismember people.

By all appearances, the script for Solo: A Star Wars Story began with a list of things we know about Han Solo, and the mandate that every single one of them needed to be explained in the runtime, from his acquisition of the Falcon to his relationships with Chewie and Lando to his gold hanging dice to his thing for self-reliant brunettes to his tendency to choose altruism over self-reliance to his frigging last name, making explicit a thing that was otherwise just symbolic. As though in The Phantom Menace, Palpatine had said "I'll call myself Darth Sidious, because of the insidious way I've manipulated the Senate and the Trade Federation all right under the noses of the Jedi Order."

Watching Solo feels like reading through a checklist, like you read the "Background" paragraph on the Han Solo article on Wikipedia. It's the first ten minutes of Indiana Jones and the Last Crusade drawn out to feature length. Everything you know about Han Solo happened over the course of about a week.

It's not great, is what I'm saying.

There are certain structural risks any time you decide to do new stories in a shared universe. One of the biggest is the tension between giving fans what they think they want, and giving fans a good story that captures what made the original stories compelling. I think Star Wars is a great example of this tension, because the Prequel Trilogy and original Expanded Universe lean really far in the former direction, and I think the sequel films have generally stuck to the latter. What the fans think they want is to see all their favorite characters, have all the mysteries explained, and get clean happy endings for everyone they care about. But that doesn't always make for good storytelling, and it certainly doesn't capture the magic of what made the original stories compelling. The fact that things weren't always explained was tantalizing, the fact that events didn't always go the way you expected made the stories exciting. Nobody needed the secret origin of how Anakin Skywalker built C-3PO or how Boba Fett was secretly the most important man in the galaxy. And while a lot of die-hards might not be happy with Han and Leia breaking up, with the New Republic and the new Jedi Academy failing, there's a lot more compelling drama there than in the immediately-successful New Republic and ascendant Jedi Knighthood crushing the last remaining pockets of Imperial resistance and discovering a new lost Imperial superweapon every time Kevin J. Anderson needs a paycheck.

In that regard, the Prequel Trilogy actually did fairly well by characters like Obi-Wan and Anakin (Yoda less so), who go from friends and colleagues and Jedi Knights to a hermit and a Sith Lord, respectively. The journey wasn't always good or coherent, but it ended with the characters as we recognized them from A New Hope.

Someone probably should have sat the Solo filmmakers down and explained this concept to them.

Hey, remember in Star Wars: Special Edition, that change that everyone hated? The one that you can reference with three words and literally any Star Wars fan knows what you mean and has a visceral reaction?

The Solo filmmakers remember this scene too. There's a bit toward the end of the movie where Han shoots his mentor, Tobias Beckett (which is just a real world name not a Star Wars name come on guys get it together), before Tobias can get off a shot. Look everyone, Han shot first!

So, what's the actual problem with the Special Edition scene? Why does it inspire such anger and vitriol, even now, twenty-one years later? It's not just the ludicrously unnatural way that Han's head moves to the left, it's what it says about Han Solo as a character.

When we meet Han, he's hanging out in a wretched hive of scum and villainy. His partner is a giant alien bear monster, not all that dissimilar from the walrus man who just accosted Luke and lost an arm for it. Han is greedy, egotistical, and arrogant; he puts the "smug" in "smuggler." He's in debt to a gangster, and he's got a price on his head. He kills Greedo out of self-preservation more than self-defense, and casually tosses a coin to the bartender to make up for "the mess."

In short, Han's a scoundrel. He's not obviously a good guy or a bad guy (as evidenced in part by the way he wears black and white; color is important in A New Hope), and we don't know where he stands. Of course, that changes over the course of the movie; he grows to care about Luke and Leia, and he gets pulled into the battle against the Empire when that's really the last thing he needs. The sign that he's grown as a character is when he eschews payment and throws self-preservation out the airlock to come back and rescue Luke during the Death Star assault.

Greedo shooting first undercuts that. It makes the moment one of self-defense rather than self-preservation, and it makes Han's action less morally ambiguous. He doesn't look as cold or ruthless when Greedo gets off the first shot. It's a more defensible action.

If I had to guess at the reason for the change, I'd suspect that Lucas was a different guy in 1997 than he was in 1977. He's said about The Phantom Menace, two short years later, that he was making Star Wars movies for his kids, and I suspect he was less comfortable with one of his hero characters acting in a morally questionable way as a result.

The Han of Solo: A Star Wars Story comes from that same place of discomfort. According to Solo: A Star Wars Story, Han was never actually a scoundrel at all. If you were to watch Solo before A New Hope, you'd never have any question as to whether Han was going to reject the reward and come back to save Luke, because that's literally all he ever does. He's not a space pirate with a heart of gold, he's a knight in shining armor riding a slightly dirty horse.

Which means that every bit of Han Solo's character growth from A New Hope up through The Force Awakens is totally moot. It doesn't happen. He was born a fast-talking goody-two-shoes and he went out a fast-talking goody-two-shoes, and the only thing he ever really lied about was that he was a bad person. Qi'ra literally in dialogue tells him that he's "the good guy," and that's right up there with "From my perspective, the Jedi are evil" and "I hate sand" in the annals of bad Star Wars dialogue.

The story of Han Solo in the Original Trilogy is that of a loner who becomes part of something bigger, to the point where he's willing to sacrifice himself to help the cause and save his friends. The story of Han Solo in The Force Awakens is that of a guy who feels like he failed at being a hero and a father and a husband, so he lost his faith in himself and slid back into old habits, failing at those too until he found someone who believed in him again.

When you add Solo in there, the story of Han Solo is that of a hero with a solid moral compass who only thinks of others, but who desperately wants to pretend to be a selfish criminal and just can't stick with it for very long. He doesn't grow in A New Hope, there's no question of his sacrifice in The Empire Strikes Back, and his return to smuggling in The Force Awakens isn't the backsliding of a failed hero but a hero retreating back into his childhood fantasy. It inverts Han's entire character arc.

Which is better than I can say for Chewie, whose reasoning for staying with Han when his stated goal is to free his people, is never actually explained. This movie feels the need to reference Teräs Käsi, but never bothers to mention the Wookiee Life Debt. We see a rare instance of Chewie interacting with another Wookiee, we even get a mention of his family, but it never goes anywhere. I could have taken less of Han painfully speaking Wookiee (with subtitles, no less) and more of Chewie showing some agency.

Or, you know, if we're going to reference bits of deprecated canon that are probably better left forgotten... 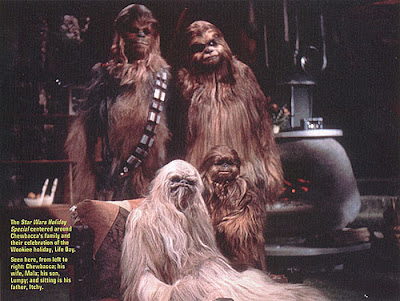 Oh, and Darth Maul shows up. I don't know what it is about the moment that feels less like a Star Wars-style twist and more like a MCU-style sequel hook, but it certainly didn't feel necessary or earned. Like the bit where Lando disparages mining colonies, it just feels like the filmmakers elbowing you in the ribs and saying "eh? eh? Recognize that?" But Darth Maul is a fan-favorite character and Emilia Clarke is kind of a big deal right now, so I suspect we'll be seeing more of those characters. Hopefully in an Obi-Wan solo movie where Ewan McGregor can act his damn heart out.

There are moments I really liked in Solo, and I think the actors generally did really well. Not surprisingly, Donald Glover kind of steals the show. I definitely enjoyed a lot of the more subtle nods to older Star Wars stories, and I know I missed most of the ones from the Han and Lando novels that I never read. I really liked Beckett's crew as characters, even though the writing was on the wall for them from the moment they talked about retiring. But overall, Solo: A Star Wars Story was just less than the sum of its parts. It's a movie that I've disliked more the more I've thought about it, which is kind of the opposite of my reaction to The Last Jedi.

And, frankly, I think that's because Solo is a repudiation of what The Last Jedi stood for. The message of The Last Jedi was that our heroes are more complicated than we think; the message of Solo is that people behave in predictable ways. There's not much excitement or drama in that latter message, and it ultimately cheapens its protagonist by making his growth into stasis. It's a tremendous step backwards.
Posted by Tom Foss at 8:22 AM