I want to talk about "Masters of the Universe: Revelation." But I can't. Not yet. Because as I made my way through Part 2 of the series a few weeks months ago, I figured out why it wasn't quite clicking with me. And in order to talk about that, I'm going to have to tell a story.
Way back in 1998, my eighth grade English/Language Arts teacher, the late great Mr. McKissick, assigned us a project: Write a pitch for a TV series. I'm sure it will surprise you to learn that I was just as much of a dork-ass nerd at 14 as I am now, so naturally my pitch was... 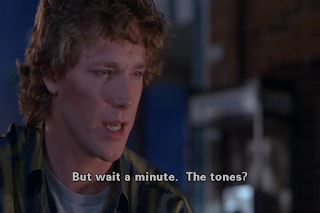 Yes, Kevin, the tones. See, "He-Man and the Masters of the Universe" was, to use Chris Sims's phrasing, a cartoon for little babies. What little violence they were allowed to show was just slightly more realistic than a Looney Tunes cartoon, and every episode ended with a simplistic moral to appease the watchdog groups. Skeletor is a character who once tried to eliminate an enemy by baking him a doomberry pie, and famously said: 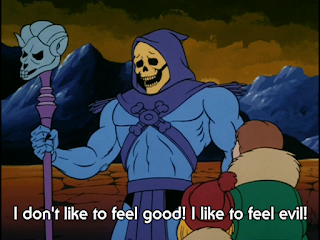 And, well, it's hard to reconcile that with the tone of "Revelation," where Clamp Champ and Fisto get blown to ashes by a grenade and then have their souls condemned to fantasy Hell by Skeletor before he goes back to Snake Mountain, where Evil-Lyn propositions him for sex.
And none of those things are necessarily bad. More mature takes on the Masters mythos can work; I think the MYP series, the Motion Picture, and the Masters of the Multiverse comic series are all more mature to various degrees and in various ways. But none of them were billed as direct sequels to the Filmation series. And it's that dissonance that hurts "Revelation" for me. My brain just can't reconcile Kevin Smith's versions of the characters with Lou Scheimer's. And even though I know it's because Filmation got its hooks into me before I had critical faculties and those shows are hardwired into the pleasure center of my brain, I prefer Scheimer's version.
A lot of what I like about Masters of the Universe as a franchise is the simplicity of it. There is no layer of artifice or metaphor. The good guys are good because it's good to be good. The bad guys are bad because they like to be bad. The guy with a big fist is named Fisto and the robot is named Roboto and the guy with many faces is named Man-E-Faces. There are no rules, no genre divisions; cyborg cowboys exist alongside faceless floating wizards. There is a purity to Masters of the Universe, and nowhere is that exemplified better than the Filmation series, where the budget and broadcast standards and episodic storytelling limited the amount of depth they could achieve. And while that sounds like a criticism, I find myself constantly intrigued by the ways those constraints shaped what they were able to accomplish, and impressed by what they created as a result.
Like, for instance: He-Man's main accessory is a sword. But there was no way that a children's cartoon in 1983 would be able to show a character using a sword as it's intended against enemies. So He-Man mostly uses the sword defensively (it often functions as a shield, deflecting laser blasts or energy beams) or as a tool (to crack open the ground or cut holes in walls). The only time he ever uses it as a weapon is against nonliving enemies like robots. And I think that's fantastic, that this hero is equipped with a deadly weapon but refuses to use it in ways that might harm other living creatures.
So when He-Man stabs Skeletor in the first episode and Skeletor remarks that he's finally using the sword as it was intended, it rings false to me. And it's emblematic of my larger issues with "Revelation": in order to make this universe more mature, you lose a lot of what made it charming and compelling in the first place.
Eventually, I think I'll come to appreciate "Revelation" for what it is: another new addition to the Masters multiverse, another different take on these characters that stands on its own, with its own strengths and flaws. And I really wish I could approach it with the eyes and attitudes of my teenage self, because I think it's exactly what I wanted back then. But the person I am now can't help but judge it for what it isn't: an effective continuation of the '80s series.
Posted by Tom Foss at 2:53 PM