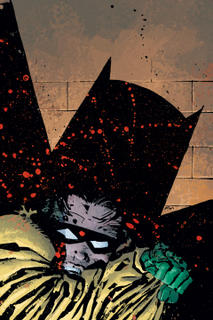 I'm done with "All-Star Batman and Robin, the Boy Wonder." Besides having a needlessly long title, the book is over-the-top ridiculousness, and I can't tell if Miller's being serious, satirical, or just plain awful.

Batman has kidnapped Dick Grayson from corrupt cops, moments after the boy's parents have been killed in front of him. He spends the bulk of the car ride trying alternatively to drug, intimidate, and empathize with the boy, all while engaging in a bit of the old ultra-violence. And let me tell you, O my brothers, this one's really horrorshow.

I think Frank Miller watched every Batman film made since they decided that Michael Keaton could be menacing in rubber, even if he couldn't turn his head, and decided to take every excess of those movies, crank the "Excess" knob to eleven, and let 'er rip. "Batman runs over a cop car in 'Batman Begins'? Here, he runs over a whole squad of cops! And sets them on fire! Batman has crazy gadgets in the movies? Well, here he has a flying car, the one from 'Men in Black 2'! Batman flew up by the moon in 'Batman'? Here, he does a loop-the-loop in front of it! Batman talks in a gravelly voice with melodramatic dialogue? Here, he talks with a super-gravelly voice, with really freaking dumb melodramatic dialogue! Sex appeal? Wait 'til you see this!"

Oh, and Alfred and Vicki Vale get to play Scarlett and Rhett. Or something.

It's amazing how fast-paced this issue is. One shock after another, one ridiculous word balloon after another, it really breezes by so fast that you might be tempted to say "gee, it's nice to see that Miller isn't writing overly-decompressed comics here."

Then, you realize that the plot has made little more than superficial, imperceptible changes from the end of the last issue, and you wonder how so many pages could have been wasted on a car chase and the worst Batman/Robin exchange ever devised.

Why is Batman trying to frighten Dick? Why does he seem to take a perverse, sadistic pleasure in slaughtering police officers and running other cars (and rabbits, and frogs, and other assorted animals) off the road? Why is there sexual tension between Alfred and Vicki Vale? Why does Batman have a flying car? With missiles? Why is he laughing?

Why does Batman say "cool"?

Ugh...the only way this could have pressed more of my "that's not Batman" buttons is if there were nipples on the Batsuit. Remind me to bring an eraser next time I go to the comic shop. I have to make a change to my pull bag.
Posted by Tom Foss at 3:15 AM

My God, do I ever agree. Maybe I missed the point of the All-Star line, I don't know. Maybe there was a DC memo that said "make Batman more ridiculous than the Midnighter."

If this was a new character, I wouldn't like it.

An what was the thing with that rabbit on page one?

Why are you being so easy on this book? It wasn't just bad, it was downright SICK! Not to mention awful in 1,001 different ways. If Frank Miller actually wrote this, then Miller is SO over. SHAME ON YOU, DC!

It's that the All-Star line was supposed to be for new readers and non-fanboys to get back into the medium.

And this is how you choose to do it?

What are you, retarded? I'm the goddamn audience!