For the second week in a row, the comic shipment to my LCS has been delayed. Yes, that means that last week, because of the holiday on top of the delay, I received comics on Friday. Three weeks without a useful Wednesday among them.

The problem with this is that comic delays are hazardous to my wallet. When comics don't come into the shop, but I do, I end up staying probably longer than I otherwise would. I don't just skim what's in my bag, I talk to Tim (da owner) and paw through 50-cent boxes. 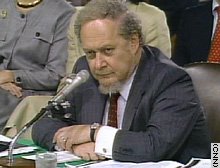 Between sales and delays and low-volume weeks, I've bought almost every issue of "The Power Company," based solely on testimonial and a love for Grummett (and a most-of-the-time love for Busiek). I've read one issue. The "Bork" special. Because I was amused that someone would name a character after a rejected nutjob Supreme Court nominiee. What can I say, I'm politically-minded.

Oh, and I have no self-control.

So I get to spend more money at the shop tomorrow. Not much, since there's really very few comics out this week. At least, very few that I buy. I just wish I could have picked up the whole load today. Would've felt like I was spending less.

Le sigh. Any other midwesterners having comic delay problems?

Nothing really good was coming out this week, so I didn't even try. They'll still be there Saturday.