He's not actually going to talk about Spider-Man again, is he? 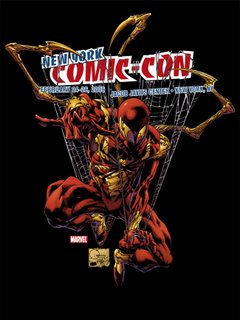 Have you heard? Spider-Man has decided to amalgamate his black costume and Iron Man's armor. And he got some prosthetic mechanical spider-arms, kind of like the ones that sprouted out of Spider-Woman III's back.

What, you don't remember Spider-Woman III? She was the one who changed costumes more times in 18 issues than Hank Pym has since 1961.

So, yeah, that sounds fantastic, right? Apparently this costume is "story-driven," and will lead Spider-Man into his role in the upcoming "Civil War" crossover. JMS has a game plan for exactly how long this costume will be around. So, at least it's temporary. I just hope it's really temporary.

But, I predict that, once Spider-Man learns the "terrible price" that loyalty to Tony Stark will cost him, somewhere in the middle of the Civil War crossover, he'll tear the costume off and go back to his old duds, renouncing his support for Stark and joining the other side.

I have a few major problems with Spider-Man nowadays. Granted, I've explored these problems before (here and here), and I'm going a little different route today.

J. Michael Straczynski got me back into Spider-Man. Not after the Clone Saga, no, I give Mike Wieringo credit for that. No, JMS got me into Spider-Man after John Byrne and "Chapter One" made me run for the hills.

I should blog about "Chapter One" sometime. And finish that post I've got on "Birthright." Yeah. 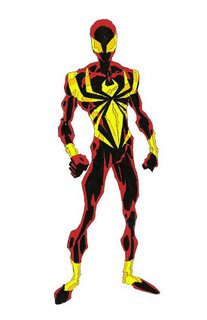 I discovered Babylon 5 when Sci-Fi Channel started showing the series. I denounced it when it started as a rip-off of DS9, and probably mostly didn't watch it because I was bitter that no channel in my area would carry DS9. Naturally, that was a dumb thing, and now that I've seen nearly all of B5, I can appreciate both it and DS9 for their very different takes on life aboard a space station.

Anyway, when I heard that JMS was coming to Spider-Man, I was psyched. I bought his run from the start; I own every issue from those halcyon days. I'd never been a fan of John Romita Jr. (though his dad's my favorite Spider-Man artist), particularly on Spidey, but I think he really grew into the book and his work grew on me. I loved the totemistic idea; I really enjoyed the way he picked up on how many of Spider-Man's villains are animal-based, and what might have caused that. Morlun was a lame villain (too much like Morbius), but I was intrigued by Ezekiel, and I liked that JMS "got" Peter and MJ in ways that most didn't.

There's a lot to like about JMS's Spider-Man, particularly in the early days of his run. He upset one status quo and restored another; he made Spider-Man fun and funny, and he added a new take on Pete's powers.

And the best part of that Morlun arc was when Spider-Man, having spent the whole story questioning his fate and origins, said "you know what, it doesn't matter," that even if he was scion to the spider, he was second cousin to radiation, and a child of science. He stopped Morlun with his brain.

So, I figured, that was it (more or less) for Spider-Totem. Sure, I expected a resolution of Ezekiel's story, but other than that, I didn't imagine that the mysticism would be such a big deal, and it really wasn't. When it was, it was done well. Meanwhile, JMS gave us some fun stories about Dr. Doom and Loki, and some lame stories about characters like gangster Frankenhulk.

Of course, when the mysticism was done, JMS should have been done too. That was the end of his story. Once Ezekiel was gone, there was no reason for JMS to write Spider-Man anymore. But, much like Mark Waid (*cough*Flash*cough*), he simply didn't know when to quit. We got Gwen Stacy's "Identity Crisis"-inspired super-aged illegitimate children from Norman Osborn. We got the new Molten Man. We got Peter getting wedged into the New Avengers. I dropped the title after "well-he-really-isn't-the-Molten-Man-he-just-looks-like-him-and-has-the-same-powers-making-him-totally-redundant" blew up Aunt May's house, though the quality had been getting more and more inconsistent since long before that (wasn't there a lame time-travel story in there someplace?).

So, after hitting a roadblock with traditional superheroics (looking at most of JMS's Spidey-stuff, it's definitely not his strong suit), and realizing that magic and cosmic events are really more his area of expertise, I can understand why JMS would return to the Spider-Totem stuff in "The Other." But, the magic's run its course. We learned our lesson in the first battle with Morlun; the spider-totem stuff is bupkis. Whether or not it's real, it's inconsequential. It certainly shouldn't be mutating Pete's body and making him into a murderer.

What started as a neat throwaway idea has come to define the character. Kind of like time travel and the Flash during Waid's run, or wacky gadgets and Batman in Loeb's run on that book. JMS is floundering, and the only way he knows how to regain the success he had is by taking Spider-Man deeper into the realm of kooky mysticism. There's a reason it feels tedious by now, it's because JMS himself told us that the story was over and done with after the first arc. JMS told us through Spider-Man that all the magic didn't matter. Now that it's become the defining characteristic of Spider-Man, we're left to wonder why we should care.

I think it's also because Marvel editorial and the writing staff have no idea how to handle Spider-Man. No idea whatsoever. It's the only explanation for the fact that Spider-Man is in the Avengers and keeps taking important roles in these huge, universe-spanning crossovers. Spider-Man is not a universe-spanning guy. Cosmic stuff is way out of his league. Yeah, it's fun to see him team up with Dr. Strange or Loki once in awhile, because he's clearly out of his element. Saddling him with magic and mysticism so he fits better is just plain damaging to his character. Removing science and sticking him into the cosmic realm artificially strips away a good portion of what makes Peter unique. Peter's storylines ought to be character-driven, not driven by plot and new costumes and powers. Sure, it's harder to write, and much harder to fit into a trade, but no one said writing a flagship character would be easy.

Oh, and what's with the whole "we threw out your costumes, but I've redesigned one for you" crap? Peter parker sews his own costumes, what does he care if they get thrown out. It just means a few more hours hovering over a Singer with spandex, using his spider-sense to avoid the needle.