I don't know who this guy is supposed to be. 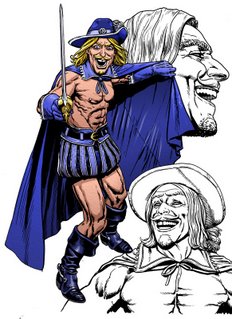 I know that he appeared in the newest New Joe Fridays at Newsarama, though Joe Quesada didn't. I know he's appearing in a new series by J. Michael Straczynski. But that's about the extent of my knowledge.

Oh, wait, I know one more thing: his previous profession. 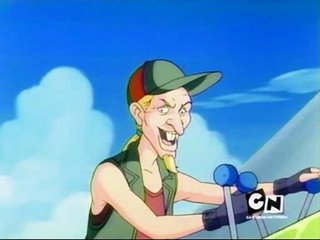 Maybe you don't know Rigger, but I recognized him immediately. Growing a moustache, working out, and dressing in the foppish, poorly-conceived remnants of someone's Renaissance Faire costume doesn't change the fact that this guy once aided and abetted the eco-crimes of one Hoggish Greedly, longtime foe of eco-friendly superhero Captain Planet. I'm not certain how he made the jump to mainstream Marvel continuity, but I would advise Marvel Comics to be wary of this character. He is wanted under international law for assisting in convoluted, often purposesless crimes against the environment. Rigger is considered armed (with pollution-spewing weapons) and moderately dangerous; should you encounter him, do not approach, but call your local Planeteer offfice immediately.

Remember, when it comes to bringing eco-criminals to justice, the power is yours.
Posted by Tom Foss at 6:07 PM

Gah! Someone wearing trunk hose, should NEVER appear without a shirt...or tights. It just is not done. Next thing you know, people will be eating with their GLOVES ON! Oh the horror.