In this mis-named installment of the Monday Monomyth, we'll be looking at the work of Lord Raglan and the model of Jesus Christ. Heavy stuff. By the way, if I accidentally type "Ragnell" instead of "Raglan" at some point, chalk it up to muscle memory.

The Raglan Pattern
Lord Raglan, when reading the story of Oedipus, noticed that the beleaguered king shared many characteristics with the stories of Theseus and Romulus. He followed this pattern through over a dozen other mythological heroes, then put it to the test with several more, to some high degree of success. All told, the Raglan Pattern consists of 22 separate traits, and each hero is given a score based on how well they fit.
In contrast with the Campbell Monomyth, the Raglan Pattern focuses more on the Hero and less on the journey.

Oedipus, not surprisingly, scores 21. Theseus gets 20. Heracles warrants a hefty 17. Raglan states at the end of his laundry list that:

It may be added that although several of the incidents are such as have happened to many historical heroes, yet I have not found an undoubtedly historical hero to whom more than six points can be awarded, or perhaps seven in the case of Alexander the Great.

The Christ-Figure
Now, if there's one thing we can absolutely, definitely classify Christ as, it's a Christ Figure. Christ figures abound in literature and myth, particularly in Western literature for some reason, but many in fact predate Christ. So, why do we call them Christ figures if he wasn't the first?
Part of it stems from Western-centric thinking, part of it stems from the fact that (for better or worse) Christ is the most well-known of the Christ figures, and thus is an easy reference. You have to do significantly less explanation to say why some character is Christ-like than you would to say someone is Mithras-like or Apollo-like.
Unfortunately, I don't know of any texts dedicated to the study of Christ-figures. I'm sure there are some, but I haven't read them. So, for my hard-and-fast list of Christ characteristics, I turn to the eerily-named Thomas Foster and his ever-useful text How to Read Literature Like a Professor. In this handy-dandy book on literary interpretation, he includes a list of common Christ-like traits. No Christ-figure conforms to all of them, after all, then they'd be Christ, but it's not usually too difficult to tell when it's intentional (and lit crit being what it is, we can always argue that the authorial intention doesn't really matter).

Foster repeats himself a bit with a "you might be" list a little later, but adds a couple more points which were omitted.

That's quite a list. There are all sorts of characters I could subject to this treatment; the classic (who is discussed at length by Foster)is Santiago, the titular old man from The Old Man and the Sea, but I hated that book. So, how about this guy... 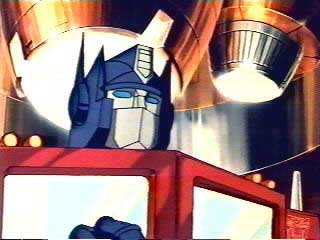 Optimus Prime!
Good with children? I think Spike Witwicky would attest to that. Self-sacrificing? You betcha; Optimus led a fight against members of his own species to save us poor humans. He tended to use himself as transportation most of the time, that's pretty humble, right? He was as forgiving as any '80s cartoon hero, in that he'd always give someone a second chance, and he'd team up with the enemy if necessary. He (and several other Autobots) drove on water in at least one episode, he had disciples out the tailpipe, and his lack of any apparent genitals means that he was probably celibate, despite the existence of sometimes-girlfriend Elita-One. Wilderness? He led the Autobots into the unknown reaches of space in search of fuel, ending up on prehistoric Earth. Devilish Temptation? In the events that led directly to his rebirth as Optimus Prime, the young Autobot joined up with Megatron's gang, and paid dearly for it. Aphorisms? "Freedom is the right of all sentient beings," "all we need is a little Energon and a lot of luck," and of course, "Autobots: transform and roll out!" And in his final, brutal battle with Megatron, he's wounded twice, in the side.
And the Autobots laid him in a sepulchre, which was a space-barge filled with robot corpses, and set it adrift. But when they visited this gravesite, they found that Optimus's body was missing, and he arose in the third season, and was received unto Cybertron where he ascended to leadership once more.

And, just for the heck of it, how does Prime fare on the Raglan scale?
2: The "father" of Optimus Prime (specifically, the person who gave him the Matrix of Leadership and remade his form from Orion Pax into Optimus Prime) was Alpha Trion, the first of the Cybertronians.
4: He was born of a damaged robot, the first Cybertronian, the computer which made all Transformers, and the Matrix of Leadership, which contained the essences of all past Autobot leaders.
5: Vector Sigma's about as close to god as the original cartoon got.
9: All we know are the events leading directly to his "rebirth."
10: He returns to the surface of Cybertron after becoming Prime,
11: where he defeats Megatron and
13: becomes the leader of the Autobots.
14: Since war is the norm, Optimus's four million year leadership of the Autobots was relatively uneventful.
15: If we can consider "Freedom is the right of all sentient beings" to be a law...
17: He's driven from Cybertron because of the need for Energon.
18: Some time later, he meets his death at Megatron's hands
19: on top of a hill
20: and neither of his successors could be said to be his children.
21: His body is sent into space.
That's about a fourteen, it looks like. Not bad, Optimus! Now, at this point, you might be saying "but, Optimus Prime isn't a Christ figure. He wasn't crucified, and he certainly didn't die for anyone's sins." And you're right, in a way. Prime's not Christ, he's Prime. Of course the details aren't going to match up. But I'll let my doppelganger Mr. Foster explain:

Many times I'll point out that a character is Christlike because he does X and Y, and you might come back with, "But Christ did A and Z and his X wasn't like that, and besides, this character listens to AC/DC." Okay, so the heavy-metal sound isn't in the hymnal. And this character would be very hard pressed to take over Savior duty. No literary Christ figure can ever be as pure, as perfect, as divine as Jesus Christ. Here as elsewhere, one does well to remember that writing literature is an exercise of the imagination. And so is reading it...Whatever we take away from stories in the way of significance, symbolism, theme, meaning, pretty much eanything except character and plot, we discover because our imagination engages with that of the author...At the same time, this doesn't indicate that the story can mean anything we want it to, since that would be a case of our imagination not bothering with that of the author[.]
On the flip side, if someone in class asks if it's possible that the character under discussion might be a Christ figure, citing three or four similarities, I'll say something like, "Works for me." The bottom line, I usually tell the class, is that Christ figures are where you find them, and as you find them. If the indicators are there, then there is some basis for drawing the conclusion.
--p. 123

That's it for this installment. Now that we've covered the basics, we can jump right into the heroes themselves. I may wait 'til next Monday, or I may just make this Monomyth Month instead of Monomyth Mondays. Anyway, we'll visit two characters next time, though I can't quite say who just yet. If you've got suggestions, fire away!