"Pants," in this case, used in the British sense of the word. A less-posed image of the Henry Cavill Superman costume has come about, which reveals some of what was hidden about Superman's costume: 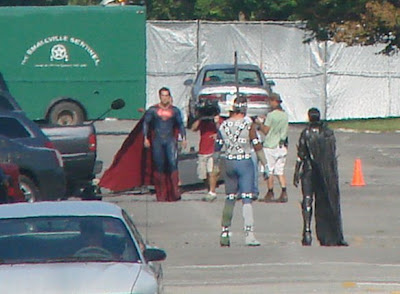 I snagged that shot from Cosmic Book News, which has a couple of different angles and a look at the black-caped Faora. Zod's costume, apparently, will be added in digitally later. It'll be interesting to see what that's like; a part of me hopes that it looks as alien and futuristic now as the weird glowy Kryptonian clothes looked in "Superman."

As for the Man himself, it's clear that he's lost the trunks. As I mentioned in the last post on the subject, losing the trunks for the film could be a good thing, depending on what they do with other aspects of the design. The other shot of Superman at CBN shows a distinct shininess to his cuffs and flanks, which was suggested by the difference in texture those showed in the promotional image. If that stands out enough, it might break up the costume in the way it needs for the trunks to be gone. It's not clear if he's rocking a full belt with this, or just a buckle of some sort, but there's at least some ornamentation there.

I'm on record as generally thinking that the trunks are an important and necessary part of the Superman costume design, and I do think this looks like a lot of uninterrupted blue. It's a lot of a slightly peculiar blue, too, a different shade than we usually see on Superman (although I like the color of the cape--and lighting/digital color correction is everything). I'm not thrilled with the change, but I'm interested to see what's done with it.

It's at least one step better than his DCnU armor.
Posted by Tom Foss at 12:00 PM

I'm mostly in agreement here. All the Quailman jokes aside, the trunks help break up the blue monotony. Without the trunks it reminds me a bit too much of the Eradicator's "Reign of the Supermen" look. I think it'll be fine, honestly, and I'm still looking forward to the movie, but it seems an odd thing to get rid of one of the most iconic parts of so many superhero costumes, i.e. the underwear on the outside of the pants.

Yes, the blue seems too dark to be properly Superman-ish.

And I think the lack of trunks would play better if they had kept the belt. A little bit of gold trim to break up the monotony of the blue bodysuit would go a long way.

That's what I keep coming back to. On one hand, it's not entirely a fair criticism, since I doubt the costume designers or moviegoing public is familiar with Superman's evil alternate-Earth counterpart who is not Bizarro.

On the other hand, it underscores the problem of the briefs-less suit: it just doesn't look like Superman. It's just too much uninterrupted blue.

Although given Snyder's last superhero movie, maybe he's unable to notice such a thing as "too much uninterrupted blue."

As long as Clark's junk isn't hanging around outside the suit.