Where is my Super-Suit?

Oh hey, I forgot, while I was gone at GenCon, they unveiled the new movie Superman costume. Or at least, they unveiled it as much as they could while also leaving it partially veiled by shadow. If you haven't already seen the image, here it is, courtesy of the Superman Homepage. 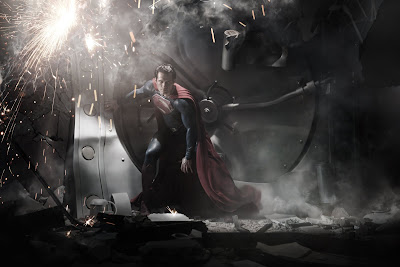 I hate to say much of anything about it without a better shot, but there are a few things worth mentioning even now.

You made a similar comment about the shield while you were here but the more I look at it the less sure I am that they stylized the S. What appears to be a stylized curve on the serif at the front of the S could, from this angle, just be the way the shield curves around Cavill's immense pectorals. Like so cmuch else, though we'll have to wait until we get a better-lit full frontal shot to know for sure.