"Come with us now on a far journey, a journey that takes us millions of miles from the Earth, where many years ago the planet Krypton burned like a green star in the endless heavens."

Today this series makes its first foray off of the comic page and into the vast multimedia landscape of Superman adaptations. "The Adventures of Superman" followed shows like "The Lone Ranger" and "Dragnet" in making the leap from the radio to the television, and I'd venture to say that nowhere is that more apparent than in this first episode. 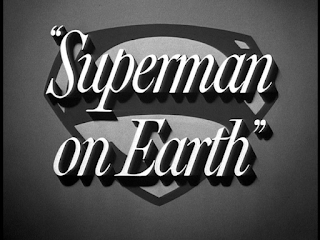 Key Elements: The distant planet Krypton was home to an advanced civilization of supermen, at the peak of human perfection. The scientist Jor-El has been brought before a council to explain destructive events that have been happening around the planet. He reveals that the planet is doomed to explode in the near future. The Council dismisses his conclusions and warnings as the ravings of a madman, and scoff at his plan to use rockets to evacuate the population to the planet Earth. 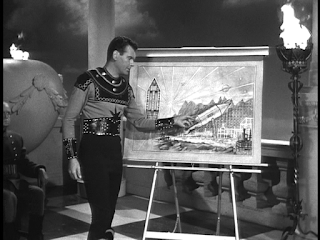 Jor-El returns to his lab, where he adds fuel to his model rocket. He plans to test it, and if it arrives on Earth safely, he'll build one large enough to take himself, his wife Lara, and his infant son Kal-El to safety. But when the tremors grow stronger, Jor-El realizes that the planet is in its last moments. The model ship is large enough for one passenger; Jor-El tells Lara to go, but she refuses, saying if any of them are to survive, it should be their child. They put the baby in the rocket and launch it toward Earth, just before Krypton finally explodes.

On Earth, Eben and Sarah Kent see a rocket crash as they are driving down a country road. Eben hears a baby crying inside the flaming ship and rescues it. Neither the child nor his blanket were burned by the fire. The rocket is destroyed, leaving no trace behind. The Kents decide to keep the baby and raise him as their own son, Clark.

As Clark grows, he discovers that he has amazing powers that set him apart from other people, like super-strength, super-speed, and X-ray vision. Ma Kent tells him the story of how they found and rescued him.

When Clark is 25 years old, his father dies of a sudden heart attack. Ma encourages him to leave town for Metropolis, and to use his amazing powers to help people. She even made him an indestructible costume out of the blankets he was wrapped in as a baby. He resolves to keep his identity secret by acting timid and wearing glasses. He takes a job at the Daily Planet, a great metropolitan newspaper, so that he'll be able to learn about emergencies quickly. He meets Perry White, Jimmy Olsen, and Lois Lane, who is immediately suspicious of Clark. 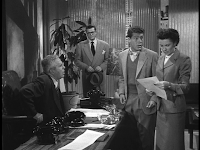 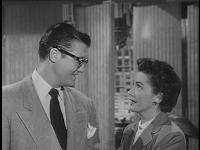 And when emergencies occur, he's there to save the day—as Superman! 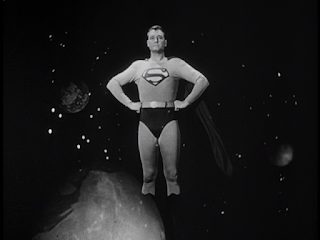 Interesting Deviations: Here, it's not the Science Council that hears Jor-El's predictions, but the governing council, meeting in the Temple of Wisdom. The Council specifically commissioned Jor-El's research in this version, which may not be an explicit departure from other origins, but certainly feels like one in spirit.

Krypton's fate is due to its sun drawing the planet closer, which honestly feels more realistic than the usual exploding core. It makes sense for the described disasters like volcanoes and earthquakes to result from changes in tidal forces as Krypton's orbit decays and the sun's gravitational pull exerts a greater influence. How much of that was known in 1952, and how much was just good sci-fi guesswork, I can't say. I also can't say that an explosion is likely to result from this process either, but certainly being torn apart might.

Talking with Lara, Jor-El notes that despite the clouds, there's been a strange glow in the west, and Lara complains about the oppressive heat, asking if it's due to the planet getting closer to the sun. Maybe it's just because it's black-and-white television, but I was immediately reminded of the "Twilight Zone" episode "Midnight Sun," except that aired nine years after this.

One really interesting, minor variation between the different retellings is who Jor-El intends to send in the rocket. Occasionally it's Kal-El from the start, sometimes both Lara and Kal-El. Here, Jor-El initially suggests that Lara go alone, then that the rocket might be large enough for both her and Kal-El, but she refuses both times. "I'd be lost on a new world without you, Jor-El."

The Kents here, as in the radio show's (lost, to my knowledge) second version of the origin and the Kirk Alyn serials, are Eben and Sarah. To my knowledge, these names never made the jump to the comics. 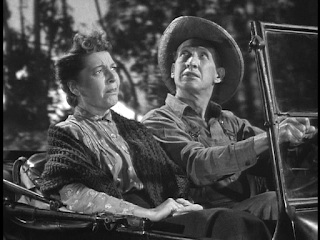 There's a lovely exchange here, where Sarah says "Eben! You can't do nothin', you'll get burned!" and Eben replies "Gotta do somethin'," before throwing dirt at the hatch to put out the fire. If I may read too far into things, Superman's parents in this segment illustrate the two most important aspects of his character: hope even in the bleakest situations, and using whatever power you have to do whatever good you can.

The Kents discuss bringing the child to an orphanage, but decide that nobody would believe their story. Interestingly, this bears a lot of resemblance to how the story would go in the post-Crisis age.

The classic image of Clark demonstrating his powers is lifting a heavy object—often a tractor or a couch—to retrieve a ball. It's interesting, then, that these early versions often go for the X-ray vision instead.

The radio program's second version of the origin story has a part titled "Eben Kent Dies in a Fire," so his heart attack is likely a departure from that story.

We see the name Smallville for the first time in this story at the bus depot. The name's been in the comics since at least 1949, but I'd be interested to know if it had shown up in the serials or radio show before this. Notably, despite "Smallville" being the setting of Superboy's adventures for at least a few years in the comics, there's no indication that Superboy existed in this continuity. 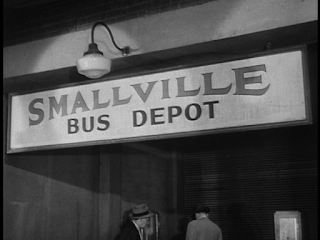 Clark is unable to get an interview with Perry the traditional way, so he tries slipping into Perry's office through the window, using a ledge outside the building. It's a bold move, but maybe not one that suits that whole "mild-mannered" demeanor. An emergency interrupts his impromptu interview—a blimp was unable to land, and now a man is hanging from its cable—and Perry sends Lois and Jimmy to cover it. Notably, he tells them to have a couple of photographers dispatched, which suggests that Jimmy hasn't taken that job yet.

Superman's first rescue is the man who'd been dangling from the rope. In his interview, he says it was a "super-guy," but Clark had already beaten him to the punch with the headline. 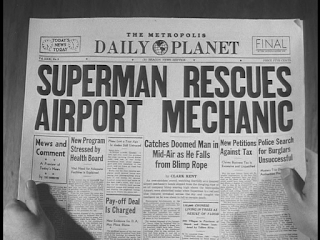 Additional Commentary: The opening narration is taken verbatim from the first episode of the radio show, "The Baby from Krypton," and much of what happens on Krypton follows pretty close to the original radio script, including the presence of Ro-Zan and Jor-El's "solar calculations." 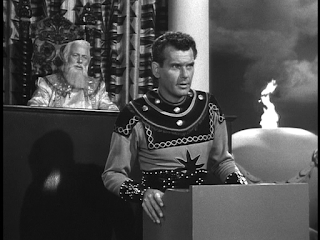 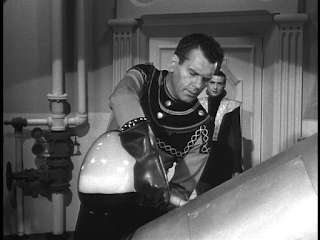 I think this shot is extremely interesting, given how clear it is that Lara is holding a sack rather than a baby. The blanket fell away to expose the sack as she moved, and she tries to cover it back up in a way that looks natural, but it's interesting to see that this didn't merit another take. 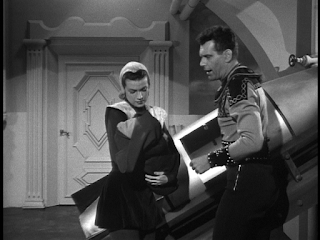 Take a look at that superdrool. When they cut away from this close-up shot, it becomes clear that the baby was probably never even on the Krypton set. 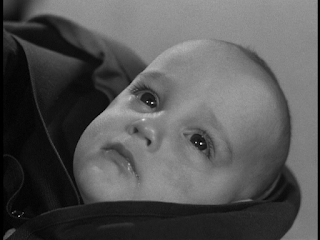 Rockwell and Towne really sell the desperation of the moment.

The baby is not on-hand for the rocket crash scene, as a stunt-sack clearly fills in again. I suppose this was the era before high-definition TVs and pause buttons; if I were watching this on a 12-inch screen via antenna, I probably wouldn't notice the difference. Eventually they do transition to having the baby in the scene.

When twelve-year-old Clark asks why he's different from the other boys, Sarah expresses that she was concerned that he was coming down with the measles. I guess it's nice that that's a relevant concern again. 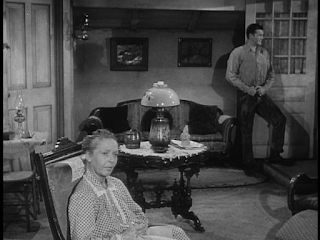 Angry, shouty Perry White here is pretty clearly a major inspiration for J. Jonah Jameson, and a nice illustration of how, once JJJ exists as the apotheosis of that archetype, Perry is left a little rudderless as a character. 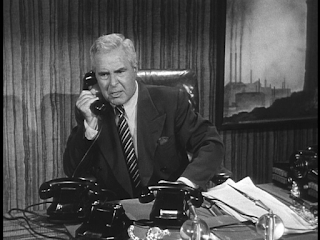 The Rocket: A classic sci-fi rocket, but not much distinctive about it. And it ultimately falls apart like it's made of cardboard. Two exploding Kryptons. 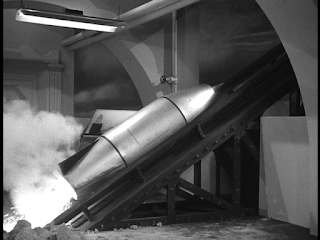