We're firmly in the Silver Age with this week's entry, "The Complete Story of Superman's Life," which begins much like last week's entry with the claim that "millions want to know" where Superman came from and how he got his amazing abilities. And the title page boasts that some of the facts have been revealed before, but this is the first time that the story has been told in full. So, here's 1961's Superman (vol. 1) #146! 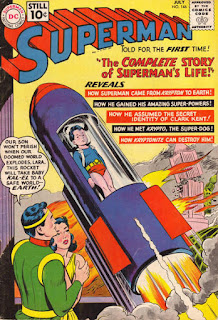 Key Elements: Superman is Earth's mightiest hero, with many amazing abilities. His story starts on the distant world Krypton, which orbits a red sun. Krypton was home to an advanced civilization with futuristic technology, as well as many fantastic creatures. Krypton is beset by damaging quakes, and Jor-El warns the Council of Scientists that these are signs that the planet will soon explode. Jor-El suggests that they build space arks to evacuate the planet, but the Council laughs at him and throws him out. Jor-El conducts experiments with small rockets, ultimately building one large enough for him and his wife Lara to send their baby son Kal-El to Earth. The rocket escapes just as the planet explodes, and the debris turns into radioactive Kryptonite.

The rocket lands on Earth, and Kal-El is discovered by farmers Jonathan and Martha Kent, a childless couple living near Smallville. They leave the child with an orphanage, but plan to come back to adopt him. At the orphanage, the child displays superhuman strength. The Kents legally adopt him, and name him Clark, after Martha's maiden name. The child demonstrates amazing abilities, and by using the indestructible blankets he was found in, they're able to make clothes that can withstand his powers.

The Kents sell the farm and move to Smallville, where Clark starts school and eventually becomes the teenage superhero Superboy. He keeps his true identity secret, and begins wearing glasses (fashioned from the indestructible remains of his rocket) as a disguise. When neighbor Lana Lang begins to suspect that Clark is Superboy, he takes elaborate steps to protect his dual identity. Eventually he discovers that he came from the planet Krypton, which explains his amazing powers.

Clark grows up and goes to college, but realizes that maintaining a secret identity will require him to pretend to be meek and mild-mannered his whole life. 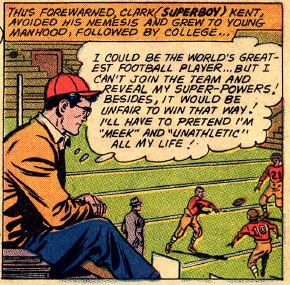 The Kents die shortly after Clark's graduation from college, but not before Pa instructs him to use his powers for the benefit of humanity. He decides to move to Metropolis, but when Superboy leaves, Smallville comes out to celebrate him. In thanks, Superboy bakes a cake so large that everyone in town can have a slice.

Clark Kent becomes a reporter for the Daily Planet, so he can learn about crimes as they happen. And when they do, he's off to save the world as Superman!

Interesting Deviations: While the story in The Amazing World of Superman mentioned Earth's yellow sun, this is the first origin we've examined that specifically noted the color of Krypton's sun. I'd be interested to know when that bit of lore entered the mythos. Clearly sometime between 1948 and 1961, and I would venture a guess that either Siegel or Binder was behind it. 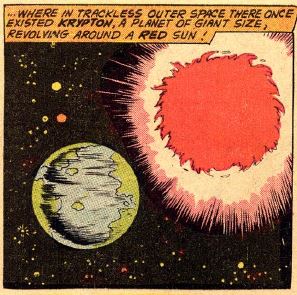 It's fascinating how the demonstrations of Krypton's advanced civilization have changed over time. Originally it was that they had super powers, in 1948 it was that they could build amazingly fast flying machines, and here it's that they have robotic laborers and that they can remove the pollution from their atmosphere. Given how Krypton's destruction has become an allegory for ignoring environmental catastrophe, this is an especially interesting element.

This is the first mention we've had of Krypton's other fauna, in this case a metal-eater kept in a Kryptonian zoo behind glass bars. Ethics of such rudimentary zoos aside, I kind of wish it were a thought-beast instead.

The physics behind Krypton's destruction receive more elaboration here, with Jor-El identifying that the planet's core is made of uranium and that a chain reaction has begun, making Krypton into a "gigantic atomic bomb." Krypton's destruction being used as an allegory for the existential threats facing the contemporary world is, clearly, not a new phenomenon.

The reason for the Council's rejection of Jor-El's predictions has changed considerably from origin to origin, but this one is unique in my experience: the Council possesses a "Cosmic Clock" that predicts disasters, and it says Krypton will be safe.

There's a tendency in these origins to make it seem like Jor-El is a bit of a crank and a doomsayer, but I like that this story pushes in the opposite direction, making the Council look like fanatics, blindly trusting in this mechanical Nostradamus. You can see shades of how Brainiac gets involved in Krypton's destruction in The Animated Series.

It's 1961, and we've met another survivor of Krypton at this point, so we get a panel of Jor-El discussing his theories with his brother Zor-El, and a surprisingly lengthy editor's note linking the exchange to Supergirl's origin. 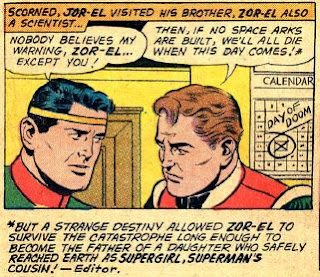 Also, assuming the Kryptonian calendar is like the American one, Krypton blew up on a Tuesday.

Speaking of 1961, the existence of the Space Race means that Jor-El's methods have come to mirror that of Earth space agencies. We see Krypto here for the first time in an origin story, and a mention that Krypto's rocket isn't the first test flight Jor-El has conducted. Beppo the Super-Monkey was introduced three years earlier.

We've seen in a couple of origins that Kryptonians were familiar with Earth, but here Jor-El discovers it himself. There's no mention here of trying to build it large enough to hold Lara as well. I think this is also the first origin we've looked at where Kal-El was verbal before he was launched into space.

Not only do we see Kryptonite mentioned here, but also the origins of Red Kryptonite. 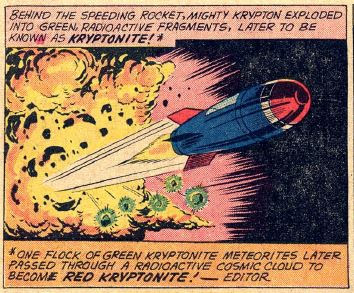 Unlike most versions of the origin, here Kal-El is thrown from the rocket when it lands, but is unharmed because anything from Krypton is indestructible on Earth. Anyrhing except the rocket, which explodes due to its super-fuel, all of which seems like a pretty tremendous oversight on Jor-El's part. The rocket being destroyed was a frequent element in Golden Age origins, but I'm surprised to see it happening here in the era of "indestructible blankets became the Superboy costume." Though there's enough of it left for the Kents to recognize it as a space ship.

Kal is left on the doorstep of the orphanage under the cover of night. We see some of the classic feats of strength at the orphanage that we've seen before, but here they go unnoticed by the staff. The Kents, on the other hand, start cataloging his powers immediately. Though the sheer number of otherwise life-threatening situations the Kents allow Clark to get into makes them look pretty negligent.

We see the further influence of the popularity of Superboy stories here, as the Kents sell the farm and buy a general store in Smallville before Clark begins school. Clark adopts his Superboy identity after mastering all of his powers except flying, which he eventually conquers with the help of Pa Kent, some weather balloons, and a rope.

The story introduces the super-robots, Clark's secret tunnel out of town and the secret rooms he built in the Kent house, and his reunion with Krypto.

At the end, we get a neat little space-age addition to the old "It's a bird!" exclamation, inserting "a rocket" in there.

Additional Commentary: The issue starts with a brief run-down of Superman's powers and character, which culminates in this neat little panel. I'm always down for Superman, champion of the underdog. 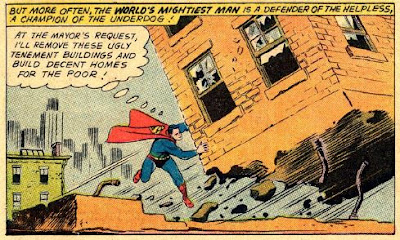 The scenes of Clark leaving Smallville are almost verbatim what we'd see in The Amazing World of Superman, down to people saving their slice of cake and Superman becoming a citizen of the world. 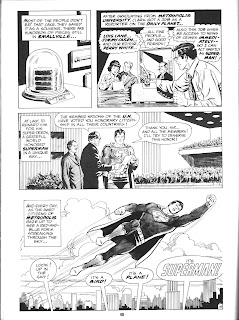 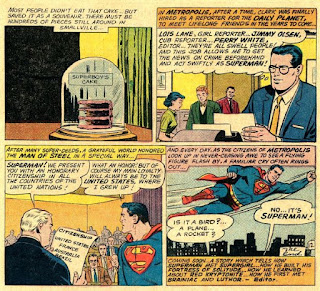 It wouldn’t be entirely surprising that the 1973 origin would hew so closely to this one, except that the last section is really the only place where it does. The biggest deviation is Superman pledging his loyalty to the United States in this version, likely speaking to the greater Cold War tensions in 1961 than 1973.

The Rocket: We'll see variations on this version of this red-and-blue rocket in several origins, and to be honest we see at least a couple of variations (differing mostly in how pointed the nosecone is) in these panels. It's not particularly distinctive, but at least it has those retro fins and the color scheme. Three out of five exploding Kryptons. 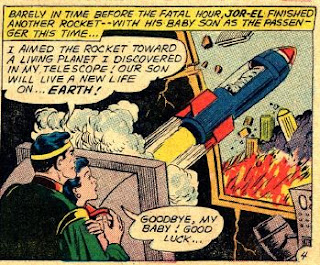