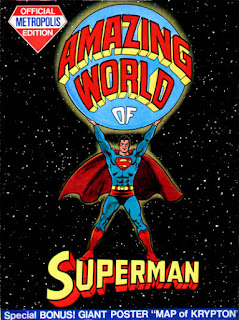 Today's entry is an interesting one. It was originally published in black-and-white in The Amazing World of Superman (Metropolis Edition), an oversized magazine published to coincide with the opening of a World of Superman Theme Park in Metropolis, IL, which sadly never opened.

The book features a bunch of interesting content, including a Superman drawing guide by Curt Swan, a review of the Broadway musical, a step-by-step description of how comics were made in the early 1970s, and this brand new retelling of Superman's origin, which would eventually be colored and reprinted a bunch of times, most recently in the Superman Through the Ages one-shot, which we'll be revisiting at least once in this series. I'll be pulling some of the color images for the post from Secret Origins of the Super DC Heroes.

Key Elements: The distant planet Krypton is home to a highly-advanced civilization of super-intelligent humanoids. The scientist Jor-El believes that the planet is going to explode, but the Science Council dismisses his concerns. He returns to his wife Lara and their infant son Kal-El, and builds a functioning model space-ship.

As the planet begins its final destruction, the distraught parents place their child in the rocket and send it into space.

The rocket lands on Earth and is discovered by Jonathan and Martha Kent, an older couple who are driving by when they see it crash. They rescue the child and bring it to an orphanage in Smallville. The child displays superhuman abilities, and the Kents return to adopt him. They name him Clark after Martha's maiden name.

Clark's powers develop as he grows older, including invulnerability, super-speed, amazing leaping abilities, and X-Ray vision. Eventually he becomes a costumed hero named Superboy, and his parents die of an illness. On his deathbed, Jonathan tells Clark to use his powers for good. Clark is distraught that for all his power, he wasn't able to save his adopted parents.

Clark leaves Smallville, attends Metropolis University, and gets a job at the Daily Planet, so that he can easily keep tabs on crimes and disasters as they happen. And when they happen, he's off to save the world as Superman.

Interesting Deviations: Kryptonians have studied Earth and the abilities that a Kryptonian would develop on that world, which they attribute to both its weaker gravitational pull and yellow sun. Jor-El proposes "return[ing] to our abandoned space program and build[ing] giant space-arks to carry our people to another world!--Earth!" The Kryptonian Science Council suggests that this plan is an attempted political coup on Jor-El's part.

Jor-El builds his model rocket after meeting with the Council, probably to account for the existence of Krypto and Beppo in this continuity (though we know that this incident isn't the only time he's brought his concerns up to the Council, so it's possible that other versions where the meeting happens closer to the planet's destruction isn't a contradiction). He explicitly states that it's big enough to fit Kal-El and Lara, but Lara chooses to stay behind and die with her husband. 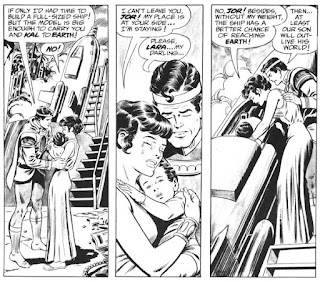 The Kents find Kal-El's rocket directly, and unlike in a lot of the early origins, the rocket remains undamaged and they bring it back home with them. They express desire to adopt the child right away, as opposed to coming back later.

Clark accidentally uses X-Ray vision to find Martha's missing ring behind an opaque object in a scene reminiscent of one in Lowther's Adventures of Superman novel.

Martha and Jonathan die of an illness, and Martha is first to pass in this version.

Additional Commentary: The Kents have this plan to hide the rocket after they drop baby Kal off at the orphanage, but they drive into and through town with the ship uncovered in the back of their pickup.

It's ambiguous enough in the black-and-white story, but when it's been recolored, the Kents are elderly again when they pass away. Which makes sense, that's how they looked in Superman (vol. 1) #161 when their death (due to the dreaded fever plague, which they contracted from pirate treasure), except that in Superboy (vol. 1) #145 (which came out five years after the Superman issue and five years before this story), the Kents unknowingly drink a youth serum and are "permanently" made twenty years younger. None of this is a problem with this story necessarily, but I'm curious to know if any effort was ever made to reconcile the different flashbacks.

Similarly, the scene where Jonathan tells Clark to use his powers to better mankind is straight out of the Lowther novel, but makes less sense in a continuity where he's been operating as Superboy for years.

This story does a good job of weaving in some of the other popular media hallmarks, starting with the "Faster than a speeding bullet!" opening from the radio show and other programs, and ending with the familiar "Look! Up in the sky!" cry. It's exactly the kind of thing you'd want to have in a book designed to be consumed by the general public who may not be avid comics readers. I've mused about the difficulties caused here and there by the complex continuity that had accumulated up to this point, with different variations on Superman's origin and flashbacks to his adventures as Superboy, but Bridwell, Infantino, & Co. are wise to gloss over it as much as they do. Though they decided to include a kind of strange anecdote about Superboy's farewell to Smallville... 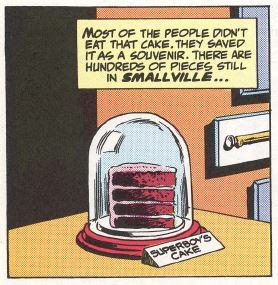 ...rather than, say, a single line of dialogue from Lois Lane. But overall, this is a pretty solid retelling of the origin, and one that I think most people would recognize as pretty definitive.

The Rocket: And this is probably the most definitive thing here. When I think about Superman's pre-Crisis rocket, this is the one I'm thinking of. It's got that Superman color scheme (in the reprints, anyway), it's got a shape that's retrofuturistic but distinctive, it's The Rocket. 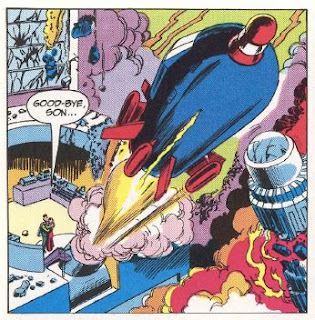 Five out of five exploding Kryptons, would ride again.