One of my goals for this project was to hit some versions of the origin that are lesser-known, so here's one that I actually hadn't read before today: Secret Origins #1. 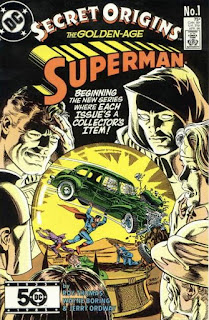 Key Elements: Krypton is a world of superhuman people. Its uranium core is leading to its destruction, as predicted by scientist Jor-L. Jor-L and Lara launch their child Kal-L toward Earth in a prototype rocket just before the planet exploded. An elderly couple, John and Mary Kent, find the rocket as it lands and rescue him from the rocket before a fire consumes every trace of it. They take Kal-L to an orphanage, where he astounds the staff with his unnatural strength, but come back to adopt him. They name him Clark Kent, and as he grows, he develops amazing powers, which his father instructs him to keep secret, but to use to help other people. After the death of his foster parents, he travels to Metropolis, where he eventually gets a job at the Daily Star newspaper under editor George Taylor and fights crime in a colorful costume made from his baby clothes. He meets intrepid reporter Lois Lane who shuns Clark Kent for his milquetoast personality but is fascinated with Superman.

Interesting Deviations: The Krypton of this universe orbits a star called Negus-12, rather than Rao. We're told that this version of Krypton has three moons, a number that will fluctuate considerably through the ages. The year of Kal-L's rocket landing is pinned down to sometime during World War I.

Additional Commentary: Despite this issue releasing after the Crisis on Infinite Earths, it's explicitly about the origin of Kal-L, the Golden Age, Earth-2 Superman, and is bookended with captions to justify its existence, given that neither this character nor the world he occupied exist or are remembered. The story proper begins with an entry from the 30th Century edition of "Encyclopedia Galactica," which suggests that Roy Thomas is a Douglas Adams fan.

We're told that his Superman costume is made from his "swaddling clothes," even though he's not at all swaddled when the Kents find him, and the rocket is completely destroyed.

There's an interesting retelling of the events of Action Comics (vol. 1) #1 here, with a new introduction that shows how Superman came to be leaping toward the governor's mansion with a bound woman under his arm. It involves the Man of Steel preventing the lynching of a man who was wrongly accused of murder, and I do feel like Thomas and Boring missed an opportunity by making the victim of that miscarriage of justice a white man. Superman preventing a more typical (by 1930s standards) lynching would have been a nice nod to the character's Klan-smashing history.

When we see that iconic image of Superman smashing Butch Mason's car against a rock in the interior, they've decided to color the car in a reddish-brown for some reason.

This is a really interesting artifact, to be honest. The combination of Ordway and Boring on art produces an interesting style that bridges the gap from the Golden Age to the 1980s, even if you get the feeling that maybe Ordway was doing the bulk of the work on some pages. It's interesting in terms of Superman history as well, since it illustrates some of the differences between the Golden Age Superman and the Superman of Earth-2, who are intended to be the same character. Even this version is replete with retcons, from the names of the Kents to the absence of the passing motorist who originally brought baby Kal-L to the orphanage to the shape of the S-shield to the extent of Superman's powers in his first outing. Details have been massaged even in this relatively faithful retelling of the events of the first two Action Comics issues.

The Rocket: This isn't the last time we'll see this snub-nosed, red-and-blue version of Jor-L's prototype. It's not the version that became the most iconic/long-lasting, but it's on its way there. 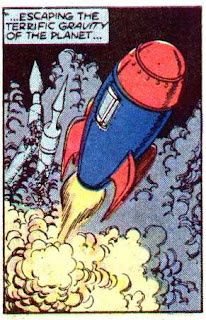 Three out of five exploding Kryptons.