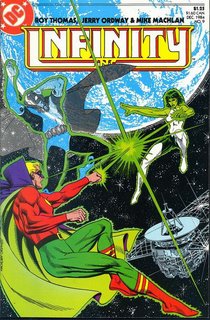 This seems like a good time to use the "below the fold" spoiler warning.

I really liked Jade, too. At least she and Kyle got one last team-up.
Ragnell predicted Jade's death way back in November. In the comments section of that post, I made the following prediction:

Jade dies, and Kyle is somehow unable to save her (loses his ring, loses charge, something). However, in death, she passes her powers on to him. He leaves the Corps, feeling both that he has failed them and that they have failed him (the tragedy that Marz talked about), and tries to rebuild his life on Earth. When he was starting out as GL, Alex's death hovered over him constantly. Now, every time he uses his new powers, he is reminded of Jade and his failure to save her. Alan Scott won't speak to him, and Obsidian wants his head on a platter. All this, and more, as Kyle Rayner tries to make a new name for himself...and that name is "Ion." 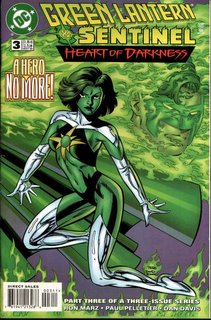 Granted, it doesn't look like Kyle's leaving the Corps (quite the opposite, in fact), nor does it look like he's destined for Earth or that Alan harbors any ill will toward him, but I called that pretty well, didn't I?

Of course, major props go to Ragnell for predicting the whole shebang in the first place. 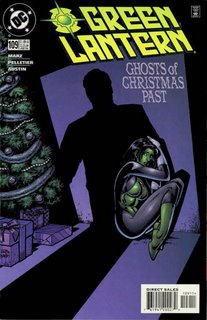 Hey, anyone else remember that Jade was raped? Me either. Well, she was molested as a child, at least. Add another one to the morbid list.

Originally I was going to end the post here, but I figured I ought to talk a little about Jade first. I liked Jade. I thought she was a cool character, long before I ever read a comic where she was a regular character. I liked her old Infinity, Inc. costume, and I don't think she's had a costume since then that was nearly as good looking. She was an example of power internalization done well (her brother's powers, less so). She made a good love interest for Kyle, right from the first time I picked up a Kyle GL comic (because it had Jade nekkid and Obsidian on the cover, and that combines far too many of my favorite things). I thought it was stupid when they started giving her plant powers, and I knew she'd be getting her abilities back 'round the time of Ion. I fully expect her to be alive again within five years.

I'll miss Jade 'til then.

Actually, Jade wasn't molested or raped. Her powers kicked in before the slimeball could do the deed. So, I don't think she belongs on that list of your's. This isn't horseshoes, either you are raped/molested or not. Just like with being pregnant, near misses don't count.

And I know Jade will be back again. Her dubious "death" is just one of those perfect open-ended things that some writer in the future will use to bring the character back. Bank on that.

True enough about the death. I don't have the molestation issue in front of me, so I couldn't quite recall. But, I do remember the creepy old man, the emotional/sexual trauma (whether or not the act was completed, she was clearly traumatized by it), and the powers kicking in to fend off her attacker.

I'd be hard-pressed to say it doesn't count though. There are all sorts of molestation, whether it's out-and-out rape or performing a lewd act in front of a captive minor or forcing a minor to view pornography or even soliciting a minor for sexual favors...I'd say making untoward, coercive sexual advances to a young girl at least comes very, very close to molestation, if it isn't exactly.

I agree what Jade suffered does come close to it, but she didn't suffer rape/molestation. Not in the truest form.

I will grant you she suffered a great emotional trauma for what happened, even if her powers kicked in to prevent the worst of it. But to put her on the list you have, I think, requires that "worst of it" to have happened to her, which it hasn't.

You could make a case for the "emotional rape" thing, but then, if you started to include that in all it's forms, you'd have probably almost every superhero (male and female) on that list.

It's worth noting, though, that Jade has suffered emotional rape, depowerment (both from loss of her powers and being used as "just the girlfrined of hero X") and now (with Rann-Thanagar Specail) "death." She's suffered in just about every way a character can, outside of an actually physical rape/molestation. So, you know what that makes her? The typical male superhero.

Which is reason enough to prove she will be back.

Still, despite the lack of actual rape, she is clearly a victim of the "female hero has heretofore unseen sexual trauma revealed as a primary motivating factor in her superheroic career" trend.

And I have been mentioning Gwen Stacy in the middle of all of this, and she wasn't really raped either, except in perhaps the statutory sense. I don't remember exactly, though. I tried to put that dreck out of my mind.