My ward Flechette is a junkie! 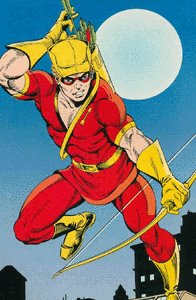 Why is Green Arrow's sidekick named Speedy? Shouldn't Speedy, by any logic whatsoever, be the Flash's sidekick? Don't get me wrong, I much prefer Kid Flash, but "Speedy" has very little to do with arrows. Has the name ever been explained?

Same with Toro. How did the original Human Torch end up with a sidekick named Toro? Toro should have been a Contest of Champions Hispanic bull-themed hero, not a kid who spontaneously combusts. "Toro" has absolutely nothing to do, as far as I can think of, with being on fire.

Bucky doesn't appear to have buck teeth, nor does he typically ride horseback. Why did Crimson Avenger have Wing? Shouldn't Wing have been Hawkman's sidekick? How lame must it have been to charge into battle saying "You'll never stop TNT and his trusty sidekick, Dan!"?

Robin has been explained (and makes at least some greater sense in light of Kane's initial idea for a "Bird-Man" character). Batgirl, Supergirl, Bulletgirl, Wonder Girl, Kid Flash, Aqualad, etc. all make immediate sense. What the heck is up with the rest of the sidekick brigade?

Toro was a contraction of his real name, Thomas Raymond. Bucky was his nickname based on his middle name, Buchanan. Wing was the oriental houseboy to the Crimson Avenger, Lee Travis. My guess is his real name was Weng and either no one knew how to spell it or it was a "clever" ploy to divert people from figuring out the CA's dual identity.
Speedy - I got nothing. Dumb name. I've thought the same as you since I first read anything about Green Arrow.

Now that I hear the Bucky thing, I do recall hearing that before. Wing seems a little too much like Kato. I'm glad to know that there's a rationale behind Toro's name, but did they explain how he got his powers? Was he a robot too?

Toro was fully human and came by his powers naturally, making him one of the first Marvel mutants. At one point he required a flame transfusion from the Human Torch to survive severe injuries, but he already had his powers by then.

Speedy was so named because he could fire arrows faster than Green Arrow.

"Sandy the Golden Boy" also makes sense and not at the same time. The Sandy part's fine. Sandman, Sandy, not to mention it's the kid's real name. But what the heck was up with "the Golden Boy".

I think it's just the curse of the sidekick. Dumb name, bright costume, and doomed to be tied up a lot and ultimately made into a junkie, emotional basket case or giant monster. :-)

Thanks, Scott. That makes at least some sense.

Kalinara: I'd thought about Sandy, and came to basically the same conclusion. Wasn't he 'round during the time when Sandman was wearing that purple-and-yellow getup? They both had yellow costumes, as I recall. I know comics are filled with people whose codenames are based on the colors of their costumes, but including a color-based code-subtitle with a regular codename?

Still not quite as lame as Dan the Dyna-Mite, though.

Speedy was a track star.

He also specialized in firing arrows in rapid succession (as opposed to firing with Green Arrow's pinpoint accuracy).

These facts are in his origin story, currently available in the Green Arrow Showcase Edition.

I am truly humbled, both by the wealth of Arrowesque knowledge imparted to me here, and by the fact that I somehow achieved this many responses on a single post.

Even if most of them were from my own narcissistic and verbose self.

Thanks, all! I can finally cross "where did Speedy get his name" off my list of unsolved comic book mysteries.

Next: who decided that "lame stories by bad fill-in teams" was the best way to end The Flash and JLA?

Uh, Bucky is called Bucky because he was named Bucky. Bucky was a perfectly common nickname for the early 20th century--Google "Bucky baseball" and you'll find several ballplayers who had the nickname.

Next up: why is she called Sue Storm when her powers aren't even remotely weather related??????

The first "Bucky" to come up in the "bucky baseball" search was Russel Earl "Bucky" Dent. Next was Stanley Raymond "Bucky" Harris. Neither one actually "named" Bucky.

Bucky, too, I found out through Anonymous up there, and research I was too lazy to do last night (and, had I thought about it, I probably would have remembered it), is not actually named "Bucky," but has more claim to the name than either Mr. Dent or Mr. Harris, since his middle name is "Buchanan."

I mean, if his name actually were just "Bucky Barnes," then why even wear a domino mask? I guess he could hang out with Dan the Dyno-Mite.

I dunno, maybe my sarcasm sense is on the fritz.

What's your problem with Dan, the Dyna-Mite? It makes sense. It's alliterative! He's called Dan!

He's the Greatest Villain of All!

Because Dan is a man, and men jerk off, and he was a jerkoff.

Sandy was in the skin tight era of the Sandman, the time period when Simon/Kirby was doing them. And just do a color change on Sandy's costume and you've got Bucky Barnes!
And how solid was Captain America's secret identity when it was "Cap and Bucky" and Steve Rogers had Bucky Barnes hanging around all the time!

As far as where the names actually came from, according to Olde Timey Comic Lore (and therefore the truth of these stories is hardly guaranteed)...

"Speedy" was named after the writer's college roommate, Roy Harper. Who was, like his comic book counterpart, a track star. The writer (whose name escapes me) needed a name and thought of his old bud and all-around good egg Roy.

"Toro" was a mistake. The writer was under the impression that the word "toro" had something to do with fire. He didn't know Spanish and was a little confused.

I forget where I read these, but I know I didn't make 'em up.

I remember seeing a panel from a golden age Green Arrow comic. Green Arrow and Speedy are nailing some crooks to a wall with their arrows.

"That guy fires a mean green arrow!" one crook cries.

"That kid's too speedy! I can't get a bead on him!" howls another.

That is apparently how the Avenging Archers got their names.

Note that in "Kingdom Come", a mini-series detailing a possible future of the DC Universe, Roy Harper goes by "Red Arrow", his daughter goes by "Red Hood", and Green Arrow and Black Canary's kid goes by "Black Canary". No "Speedy" codename in sight. Apparently Mark Waid agrees that "Speedy" is a retarded name.