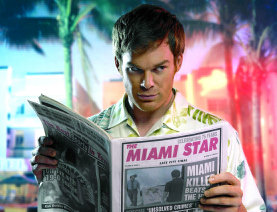 Anyone else watching (and loving) Dexter? The serial-killer-as-hero idea is one I had a year or two ago, after reading a couple of the Hannibal Lecter books, but I may have to shelve it after seeing this series, since it's almost exactly what I would have done, only light years better. It's funny, it's intriguing, it's well-acted, and the last-second cliffhangers make Brian K. Vaughan look...well, no, BKV still pretty much looks amazing. But the cliffhangers here are well done also. Uh...yeah.
Anyway, it's not often that I'm able to really figure out a mystery as it unfolds, so when I predicted the reveal at the end of tonight's episode in the first ten minutes, I felt pretty damn good about it. And it's not because of bad writing, mind you, this mystery's been building since the pilot.
I'd like to read the novels that the series is based on, but it seems like the plots are pretty close, and I'd rather not spoil the rest of the series for myself. But that's a relatively minor inconvenience--it's nice to be so interested in a series that I'm upset when I can't get enough of it.
I'm not totally sure where I'm going with all this. I guess I just wanted to pimp my new favorite non-Law & Order primetime drama. It's a fantastic series, and if you can watch it (and you can--the first two episodes are available for free on the website), please do so. It's a scream.

I too, love this new show. Michael Hall is perfect for Dexter, it is funny and disgusting all at the same time. I just wish it weren't on so late. Don't mock me, I'm old!

I love the show. I was going to read the books first, but then the show started and I watched it and now I don't know that I'll ever get around to reading the books.

I had the doc pegged from the first time I saw him, cuz the killer had to have medical knowledge and the guy was into limbs, so.... heh

I've been enjoying the show a lot, and the writing and Hall's acting is just pitch perfect. I've also read the first book, and while the first half of the season stayed fairly close to the source material, the latest episodes have diverged pretty broadly. It's not a fault or a critism; the book is short enough that it really only focuses on the Ice Truck Killer plot. That's only about a two hour movie if adapted straight, so the differences work well as an expansion of the core concept.