Is anyone reading the new Martian Manhunter series and thinking "yeah, this is exactly what I want from J'onn J'onzz"?

Is anyone reading the new Martian Manhunter series?

Because when I think of Martian Manhunter, I don't think of "moody Skrull-chinned embattled leader of a cabal of fugitive Martians, trying to bridge the gap between two groups of people who distrust him." I don't think "evil government agencies trying to kill and experiment on incredibly powerful aliens for no apparent reason, and honestly thinking they can hide it from one of the three most powerful people on the planet." I don't think "soul patch-wearing tattooed magic-wielder going through Lion-O's Anointment Trials to obtain individual powers from vaguely redefined gods so he can become a superhero whose name is no longer regulated by complicated copyright laws."

...Uh, sorry. Mixed up my terrible 'new direction spinning out of Brave New World' series for a minute there.

I look at this series and I see some of the most hilariously awful costume design since the "pouches, mullets, and asymmetry" days of the '90s. I see yet another confusing rewrite of Martian history. I see a wildly out-of-character J'onn J'onzz. I see artwork which often hinders the story, either through its weirdness, its stiffness, or its decisions to show or not show things which would give some context to the narrative captions. I see inconsistent use of Martian abilities, which have not been defined for new readers, and have not been clarified for old ones. I see superheroes conspiring with a corrupt government agency to take down a friend, which seems to suggest that some lessons went unlearned in the recent Crisis. I see nothing to tell me "hey, you should be buying this. This is the Martian Manhunter you've always wanted to see."

You know what I do think? I think it's time for another "My Ideal" post... 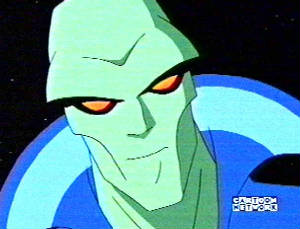 Agree with that, but let me jump the gun:

My ideal Martian Manhunter is the one I was exposed to as a child in that team-up with Green Arrow against...um, "The Saucer Master"? Can't quite remember...

Anyway J'onn and GA (and Speedy) teamed up against three renegade Martians. My point being: as a kid, I thought that was J'onn's job, to stay on Earth and make sure renegade Martians didn't come down here to screw things up. And that meant he couldn't go home, right? Because he was stuck here on Earth. He couldn't see his family.

It's the same thing, really.

Anyway that was how I figured it as a small child.

Agreed. I gave up after the "revenge is the only one not foreign to my people" line. That was not J'onn J'onnz, nor was it anybody I wanted to know.

There's nothing wrong with revamping ol' MM. The character was too powerful, too nice, and too calm to be very interesting. He was, in a word, boring. Plus, the costume was a little on the silly side. And Infinite Crisis provided an excuse, however contrived, for rewriting him from scratch.

Unfortunately, the direction they chose to take him in is equally boring, and a lot less pleasant. Now, instead of being an overpowered nice guy, he's an overpowered schmuck, who keeps telling us how not-human he is. Also, he's butt-ugly. And instead of simplifying his background, it was made even more complicated. What a wasted opportunity.

What would I have like to have seen? Well, lower his power level, a LOT, for starters (make that an Infinite Crisis retcon). He shouldn't be more powerful than Superman (no hero on DC Earth should be), and anyway, it's easier to write stories for someone with weaknesses. Concentrate on his spookier abilities (telepathy, shape-shifting, phasing, invisibility). Some reason the Martians have those powers would be interesting, too -- why are they SO good at sneaking around, did they have a hereditary enemy very good at tracking them? If so, is there something about being a Manhunter that is actually perverse for a Martian? That could be an ongoing problem for him. And where are those enemies now?

Does J'onn even really want to be a hero? If so, why? Sure, he was a cop on his homeworld, but cops have home lives, and not all of them burn to punish the guilty. He seems to really prefer blending in, he never strikes Kirby poses. Why? Do Martians, or at least J'onn, have a weak sense of personal identity? Is that why he's so devoted to the League?

And give him a mission in life that's NOT about Mars. Something relevant to the casual reader. Example - maybe serial killers' minds hurt telepaths. I mean, imagine if you had Jeffrey Dahmer rambling to you and he wouldn't shut up. Maybe he needs people like Deathstroke or Dr. Psycho safely locked up far away where he won't keep hearing their thoughts. Maybe he's tempted to just kill them. Maybe it hurts to fight them directly, so what are the alternatives? That sort of thing could make for good stories, I think.

To answer your first question, no, no one is reading the new Martian Manhunter series. At least not here. :)

I like the stuff trilobite said at the end of his comment... all of those angles would produce way more interesting Martian Manhunter stories than we're getting right now. I also like the way he was treated in "New Frontier." It may not work in the regular DCU, but I think it fit that piece really well.

Gotta agree that the Brave New World relaunches are generally pretty bad and pretty poorly-selling. That said, All-New Atom is one of my top five books right now. Have you given a look at that one?

I like the idea of a MM whose sole powers are telepathy, shape-shifting and phasing. I also think he'd work great in a noir setting (bring back John Jones, Detective), maybe with a little sci-fi thrown in.

It would take some imagination, but it'd be a lot better than what we're seeing.

A few years back there was a syndicated tv show called Total Recall 2070, ostensibly based on the Schwarzenegger film putatively based on a Philip K. Dick short story. The funny thing was, the tv series had nothing to do with Mars or any of the plot elements of the film; it was about an evil corporation that made androids. The creators of the series freely admitted that they never had any interest in making a series based on Total Recall. They had wanted to make a Blade Runner series but couldn't get the rights, so they bought the name of the other film loosely inspired by Dick and went ahead making their Blade Runner show with the other title instead.

I think we've been seeing exactly this same thing with Jonn Jonzz for years now: writers who wanted to do something entirely different to start with being given a brief to "make the Martian Manhunter interesting" and trying to retrofit the character into situations that don't suit the fundamental concept. "I want to do my conspiracy theory X-Files superhero comic! I'll make the Martian Manhunter into that!" Or "I want to make him magic-based because I'd rather write about magic than Martians!" It's as ridiculous as wanting to revise Superman as a Matrix-style martial arts fighter because that sounds really kewl.

For my personal tastes, I reckon plok has it exactly right about the most aesthetically satisfying way to use the character for the nostalgia crowd...and Eric G rightly mentions New Frontier as another good template. But there are a dozen different ways the character might be effectively used without this idea that he has to be radically altered because some writer is still living in 1986 and thinks grim pomposity is the height of artistic achievement.

I think it was "The Capsule Master", actually...

Wow, Trilobite! That idea about how being a "manhunter" would be weird and disturbing for a Martian sounds completely awesome, as well as the idea that killer's minds "hurt" him. Lots of room to move in there, and without really changing things. Just fixing them.

And RAB, you crack me up with your Total Recall 2070 reference! That was great fun to watch, if only because it was loaded up with old Canadian TV stars to an almost hilarious extent. Also the protagonist's name was kind of a clever choice for a Dick-inspired show: David Hume.

I quite liked that show, actually!

Frankly, I keep waiting for the Oreos (Chocos) to show up. Where are his cookies dammit?

The supreme irony of your Total Recall story is that Blade Runner itself, while based on the PKD novel, got its title from a William Burroughs story about traffickers in medical supplies-- Blade Runners. Ridley Scott just bought the rights to the title because he thought it sounded cool, and then used it for his PKD story about replicants and the Blade Runners who love them.

I do not proclaim to know much about J'ohnn as a character. I have tried to read the new MM. From what I can tell, it all goes back to the comments at the DC panel I saw that J'ohnn is "becoming more Martian-American" than in the past (trying to fit into our world as opposed to embracing his, well, Martianess). Plus, I think they were way jazzed about having there be more than one martian.
It just seems like a martian on human beatdown setup to me.