On Bizarro Blog, us do opposite of all blogohedron things! 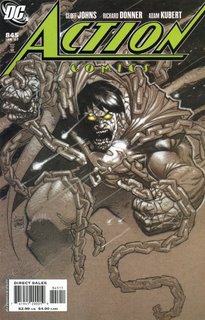 The Geoff Johns/Richard Donner Action Comics? Not so much.

Analogy time: Anyone remember the electric-era Superman Red/Superman Blue storyline? One element of it that didn't get quite the amount of attention that I think the writers wanted was that the split Supermen had different personalities. Superman-Blue became uptight, methodical, calculating Felix Unger, while Superman-Red was wisecracking, lazy, sloppy Oscar Madison. The thing was, it wasn't until they ramped up the Felix-ness of Superman-Blue that you really noticed; I mean, he acted pretty much like Superman. With Red, as soon as he started wisecracking like Spider-Man, you knew something was up. Blue had to become even stiffer than the stick up his butt before you noticed that he wasn't just Superman.

That's kind of how I feel about the current Superman comic situation. The collaborative "Up, Up, and Away" storyline was fantastic, mainly for its examination of character, and all the great character moments. Sure, the action was well-done too, but it was the character moments that kept the story afloat. Especially as it bore some striking resemblances to The Best Movie Ever.

Now, with the authors split, I think I see who contributed what to the story. Kurt Busiek put in his intimate understanding of the characters and his ability to reconcile everything into a coherent story, while Geoff Johns contributed his encyclopedic knowledge of modern comic history and his love for the Superman movies.

So, we have Kurt Busiek writing the Superman-Blue book. It's a comic that looks and acts so close to Superman that you'd really have trouble seeing how it's different. He's got a little bit of nepotistic continuity going on, but it's not blatant, and I for one would love to see more of the Power Company wherever possible. But it's been interesting, if leisurely-paced, and I want to see where everything's going. So far, it seems like Kurt wants to touch on all the classic comic hallmarks in a new way. We've had the big superhero team-up against a giant cosmic entity, we've had the ex-girlfriend who re-enters the hero's life and brings trouble with her, we've had the misunderstood monster battle, and now we've got the magical prophecy and the dystopian future. Oh, and the mysterious über-powerful mastermind behind the scenes, too. Kurt's getting his silver age groove on in a very different way from Morrison (and in a very similar way to Will Pfeifer, now that I think about it), and I dig it. I dig it a lot.

And we have Geoff Johns and Richard Donner writing the Superman-Red book, the one that, right off the bat, seems a little 'off.' Maybe it's the way Superman refers to humans as 'them,' or the way he talks to his (oddly youthful) parents as if he doesn't really know them, or the way Bizarro acts in general, but it seems like Action Comics is adrift in the same "not quite continuity" that kept me from really enjoying "Trinity" and was just one of dozens of strikes against "For Tomorrow." Okay, Geoff, Richard, I get it. You love the Superman films. I love 'em too, I love 'em to death. They've got their flaws, but they're fine movies. I even loved The Best Movie Ever, and I'm sure your super-kid is tapping into that. But...can't we try something new? Or, if we're going to try something old, could we at least pay some attention to continuity?

I mean, Bizarro's a perfect example. Since his re-introduction in the Emperor Joker story, Bizarro has been very consistent: ridiculously powerful, not too bright, talks backwards. He's not exactly a homicidal maniac, and certainly not the brutal monster I just read about, he's a semi-goofy character. There are plenty of monster-villains around, Bizarro's always been either goofy or sympathetic and misunderstood, and that's something that allows him to stand out as somewhat unique. There are any number of dopey superpowered brutes running around the DCU, and it wouldn't have taken much tweaking to replace this Bizarro with Solomon Grundy or Blockbuster or Doomsday or Mammoth or Shakedown. The DC's littered with those guys, but there's only one backwards-talking grinning sorta-villain anti-Superman. Taking that away from him makes him anonymous.

And there's the whole thing with Jor-El. I don't remember whose blog I was reading recently, but they were talking about the strange Jor-El fascination that some people have, and how his story ended when he pressed the launch button. The guy was a sperm donor. Clark Kent has a father, and he's neither Kryptonian nor dead. And the Superman of the DCU, the Superman of "Up, Up, and Away," who clearly saw himself as Clark Kent first, is not an alien living among humans, he's a human with the powers of an alien, and that's a very important distinction. Consulting Jor-El's ghostly hologram while talking to Pa as if he doesn't really know him...that's not the DCU's Clark Kent. It might be the Clark of some other medium, but not the comics, not as he's been established since Byrne and re-established OYL.

Speaking of things established by Byrne and re-established OYL, what bug crawled up Perry White's butt? Clark Kent's not the dopey, klutzy milquetoast of the movies, and Perry's not such a jerk that he'd wonder what Lois sees in him. He's known the couple as individuals for years, and he knows full well what she sees in him. Just a few months ago, Perry was complimenting Clark on how put-together and on top of things he's been recently (and then threatening to fire him for getting distracted and unreliable again). Did Clark's backslide cause Perry to forget all his good qualities? To forget that he and Clark are friends?

And then, we get (is it a spoiler at this point? It came out almost a week ago, right? Well, stop reading if you still care) General Zod. And Ursa and Non, of course. And it seems like they must have met Superman before, but unless the movies are comic continuity now (and they shouldn't be), we've never seen that story.

But I'm not entirely opposed to General Zod and the Kryptonian criminals, at least, not on principle. I've got a post draft waiting in the wings about how much I hate General Zod, but that'll wait (though not for too long, not with Zod's recent re-emergence). It's just...Lex Luthor, super-kid, crystal Fortress, holographic Jor-El, Kryptonian criminals...it's all pretty well-worn, and recently-worn, territory, isn't it? Does Donner really want us to think that he's only got one Superman story in him, and so he has to keep telling it?

It's not like this is a bad story, but it suffers from a lot of easily-corrected continuity issues, which shouldn't be showing up when continuity-god Geoff Johns is co-writing. Would it have been so hard for Geoff to say "well, the modern Bizarro talks backwards, and we should really give some reason for his change in attitude," or "Superman considers himself human first, and Kryptonian second, so referring to humans as 'them' is really kind of out of character," or "hey, since we're naming this kid with a 'C. Kent' name, we really ought to mention Superman's recently-deceased 'son', admittedly my favorite Teen Titan. I'm not saying we should name the new Super-kid 'Conner,' but someone should mention it. Maybe Clark could then look a little morose and say 'no, it's too soon' or something like that," would any of that have been so hard?

So, hopefully Action Comics-Red will shape up a little with the next couple of issues. Donner's new to comics, and if the trend continues, by the end of the next issue he'll really have kind of gone through the plots of the movies he's already done, so maybe the next few issues will be more tight, more original, and more in-continuity. It's not a bad comic by any means, even a sub-par Johns Superman book is still better than a lot of the comics I read, but it's the overall quality that makes the flaws stand out. And since this is the Superman book with hype, it looks bad that Busiek's quiet little comic is better. Not as bad as it looked when Rucka's underpromoted Adventures of Superman was 20,000 leagues better than Azzarello's overhyped "For Tomorrow" arc, but still bad.

By the way, about the "freezing fire" thing, I think people have misinterpreted the scene. The frozen swirls don't look like flames, they look like plumes of gas, which suggests that Superman's burst of super-breath was cold enough not only to solidify the melted pavement that erupted around Bizarro, but also to instantly solidify the smoke. It's a suspension of disbelief (and physical law) scene, but not nearly so bad as 'freezing fire.'

Have you thought of posting this on Geoff Johns's Message Board? (www.comicbloc.com/forums)

I really hope I'm not making an enemy of Geoff Johns. He's such a nice guy.

If you made an enemy out of Geoff Johns, Molly would kill you.

I love your review. I was totally down with Action #844, but with #845 the weirdness has started to sink in. It's not a bad story, but it would definetly read better if it just stepped out of continuity completely. I'm not sure Geoff Johns would let himself write a story that would do that, though!

I read the current replies to your post on the Geoff Johns board. I'm really interested by the guy who says he'd like to see "value-free reviews" but then makes the bold (and to me, wrong) claim that "the ultimate measure of a comic is how well it reads as someone's first comic". First off, this is totally this poster's own value system seeping in, and I can't believe he doesn't see that, and two, without values, why bother doing anything, let alone review a comic? You must value comic books and writing and being critical and sharing your thoughts to want to review a comic, and you must value Superman to want to review Action Comics #845. I really want to reply to that guy and show him all these inconsistencies, but that post would be 100% philosophy and 0% Superman/Geoff Johns, so I'm not going to... but I had to get that out.