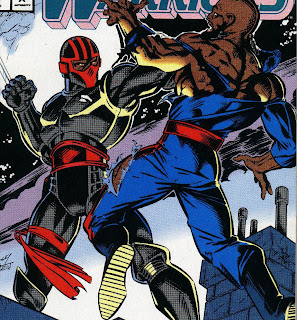 You've got to feel a little bad for Night Thrasher. The poor guy just can't seem to do anything original. And certainly not for lack of trying, either. He's not Marvel's only skateboarding superhero. In fact, he's not even Marvel's only skateboard-based technological genius black superhero. He's not the only person to lead a superhero team based on a reality show. He's not even the only reality show superhero team leader to wear a specialized suit of armor. He's not the only black guy to be killed in Civil War, and though he was the first, he certainly hasn't seen the attention or outcry, whether in or out of story, that Black Goliath received. Dwayne Taylor didn't get a symbolism-laden superhero-studded funeral. In fact, he'll probably be remembered in the Marvel Universe for incompetently leading an inexperienced team into battle against a foe who was out of their league, resulting in the deaths of a bunch of innocents.

Not even Night Thrasher's origin is original. Stop me if you've heard this one before: a wealthy child witnesses his parents' gruesome deaths, and so dedicates his life to achieving the peak of human athletic ability, so he may avenge their deaths and fight for justice. By day he runs a multibillion-dollar foundation, but come nightfall he outfits himself with a special costume and weapons and gadgets of his own design, to combat the forces of evil. And people say that Black Panther is Marvel's Batman.

But Night Thrasher, despite a lame-ish name and a dated gimmick and a derivative origin, still managed to be a good character. He spent a good deal of his time wrestling with his shortcomings and with the expectations of others. He had a team who needed him to be an experienced leader with an unwavering moral code, he had a creepy foster mother who wanted him to be a source for greater power, a business that expected him to be a competent and active CEO (while also unaware of their dealings with A.I.M.), and eventually he had a super-powered ward who wanted him to be a guardian and father figure. It's no wonder he had a temper, no wonder he was so often on-edge, no wonder he struggled. 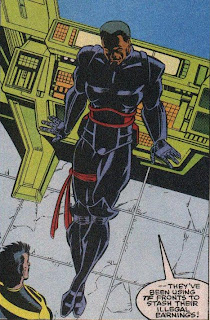 And yet, this embattled young billionaire superhero managed to be one of the New Warriors' best characters, and was an eight-year-old Tom Foss's favorite member of the team. In a book which, when I started reading it, boasted Darkhawk, Speedball, Nova, and Silhouette, that's saying a lot. Looking back, I think a lot of it has to do with that awesome costume (which got progressively less awesome with each change), as is the case with a lot of my most beloved characters. But now I appreciate Night Thrasher for the realism of his position. He is what young Batman should have been: temperamental, moody, unsure, and stressed to the breaking point. Losing one's parents in a brutal attack at a young age is not good for one's emotional health. Dedicating one's life to revenge doesn't usually lead to a well-adjusted person. Being a rookie superhero as a young man does not make for great confidence. And none of that is very good for producing a well-developed and unyielding moral code. It's hard to lead people, it's stressful to run a company, even for someone who's been doing it for years. Dwayne was what, early 20s when he founded the New Warriors? That's going to take its toll on anyone, and the writers recognized that. Night Thrasher was flawed, like any young hero would be.

And yet, he led his team against the nigh-omnipotent Sphinx. He fought against Terrax the Tamer, former herald of Galactus. He helped Thor against the unstoppable Juggernaut. And every time, through his guidance, the New Warriors prevailed. The Marvel Universe may remember Night Thrasher for "incompetently" fighting Nitro, a villain who was "out of his team's league." I'll remember him as a young man who dedicated every facet of his life to making the world a better place, a man who saved the world a dozen times, and has been all but forgotten for it.

But someday, the revolving door of the Marvel afterlife will spin once more, and Civil War's first mistake will be undone.

Every time Stark or even Cap or any of the others mention Nitro as "out of their league" in re: to the Warriors I want to reach into the comic and smack them...

I second what he just said. I love Dwayne.