It's Black Comics Month at the Fortress of Soliloquy!

And unlike Monomyth Month, I'll actually follow through with this one. Every day I'll be posting a brief profile on one of my favorite black comics characters. I realize there's some potential for tension when a clueless white kid tries something like this, so let me assure you that I'm not just rattling off popular characters. I've picked out twenty-eight characters of color who I like, respect, and follow, and while there will be some obvious folks on the list, I think there should be more than a few surprises as well. Hopefully I can treat this subject and these characters with the respect and attention they deserve.

So, to start things off, I'll talk about a character who is quite near and dear to my heart, Ron Troupe. 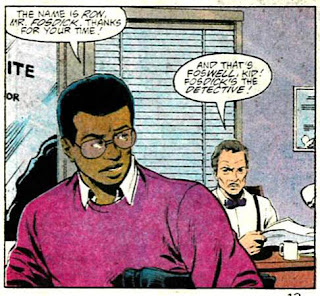 I've seen a lot of supporting cast members come and go in the Superman books, from Keith and Angry Charlie to Scorn and Ashbury to Lupe and Josef. But Ron has one major distinction: he's still around. Ron first appeared shortly before I started reading the Superman comics regularly, but really rose to prominence after Superman's death. And it's the simple fact of this rise that makes his continued importance to the Superman mythos that much more amazing. See, Ron Troupe could have very easily been a cop-out character.

We all know the cop-out characters, the out-and-out jerks whose primary purpose is to make our beloved main cast look better. Jean-Paul "Az-Bats" Valley was a cop-out character; his entire tenure as Batman was to show how much better Bruce was at the job. Simone DeNeige was a cop-out character when she ran LexCom, after Luthor dissolved the Daily Planet. Remember when that jackass Admiral took command of the Enterprise while Picard was on a secret mission, and kept butting heads with Riker? Yeah, he was a cop-out character. These are the short-lived characters who prompt the main cast to say "this never happened when X was in charge," or "it's times like this when I really miss Y." Sure, these characters are occasionally necessary, and it's always nice to shake things up and remind the readers why they like the main cast in the first place.

Even nicer, though, are those rare occasions when someone comes in like a cop-out character, but actually turns out to be really likable. They aren't bad people, they aren't grossly incompetent, in fact, the only thing the reader can hold against them is the fact that they aren't the main character. This new figure is filling a niche that was once occupied by a long-standing character that the readers know and love, and despite themselves, the readers realize that it's not the new character's fault that they have big shoes to fill.

Ron Troupe was the new guy. After Doomsday's rampage, Clark Kent was presumed dead. Reluctantly, Perry White gave Ron Clark's old desk and position, needing to fill that vacancy with someone talented. The audience had every reason to hate neophyte Ron for usurping the job of Clark Kent, but...Ron was a good guy, and it really wasn't his fault that he was put in such an awkward situation. It wasn't his fault that Superman was (mostly) dead. And so he did the best he could, and we grew to respect him for it. DC took an opportunity to show what a great, invaluable reporter Clark Kent is, by filling his spot with someone incompetent and incapable, but instead they took the more difficult route. And because of their effort, we got to watch Ron Troupe go through the gauntlet of fan judgment and come out all the better for it.

If that story sounds somewhat familiar to you, it's because of another recent character who was put in a difficult position of trying to fill in for a protagonist, who could have been a cop-out jerk, but instead was a responsible, likable, respectable human being. His name was Richard White, and I sincerely hope we haven't seen the last of him.

Anyway, Ron has rarely taken the spotlight in the Superman comics. He had a few chances to really shine against racist supervillain Bloodsport (II), sure, but the only time he really took center stage was during his tumultuous courtship with Lucy Lane. The two had to contend with Sam Lane's overprotectiveness, Ron's sister's prejudice against interracial dating, and eventually an unplanned pregnancy. And hoo-boy, you better believe that brought the heat down. If I remember correctly, at the time Ron was between jobs and was doing volunteer work at a shelter, and I don't remember if Lucy had been working or not. The couple ultimately decided not only to keep the baby, but also to get married. The two managed to get by fairly well after that, and Ron stuck with his volunteer work (even turning down a job at the Planet, I seem to recall). After that, Ron, Lucy, and little Sam disappeared for awhile, finally popping up again in Rucka's run on Adventures. Ron had apparently rejoined the Planet staff, and who can blame him? Metropolis rent is expensive.

Despite such little face-time in the last fifteen years, Ron's been pretty well-developed. He's opinionated (with that firebrand sort of attitude that characterizes at least one other Metropolis reporter), he has unwavering moral principles, and he's never afraid to get into dangerous or uncomfortable situations, whether it means standing up against the Aryan Brotherhood or calling the interim Editor-in-Chief of the Daily Planet (a cop-out character if ever there was one, and in Ron's first appearance, no less) a "dick." He's faced hardship and tension, he's been put into situations that might break another man, but Ron has triumphed over it all (even if those triumphs were mostly off-panel). It may seem like damning with faint praise to call him the third best reporter in Metropolis, but it really is quite an accomplishment. After all, his competition consists of the world's luckiest woman, and a man with super-senses who can type a million words a minute.

It's hard to not admire Ron Troupe. 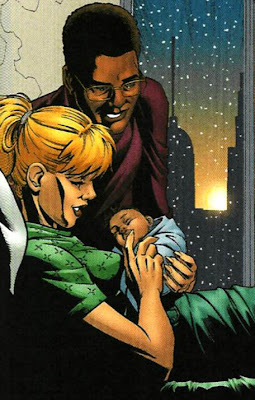 Hey, it just occurs to me now for the first time - isn't that interim editor a shout-out to Spider-Man character Frederick Foswell? Same name, and very similar looks, even!

See, a couple of days ago, I was trying to remember the name of the guy who replaced Perry, and all I could come up with is Foswell or Fosdick (no doubt recalling this issue), and I wrote it off, because I thought that was the name of a similar-looking Spider-Man character. When I saw this panel, I just kind of figured I'd misremembered the Spidey cast member. So, yeah, I'm willing to bet that it's an intentional homage.