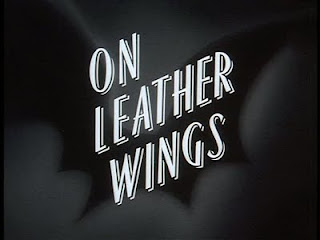 I watched the first-produced, second-aired episode of Batman: The Animated Series again recently, for the first time in quite awhile. I actually remember watching the episode--and, for that matter, "The Cat and the Claw" before it--when it first aired. Right off the bat--no pun intended--the main pieces are present: the jarring shifts between Batman and Bruce Wayne, the mesh of detective work and sci-fi superheroics, the jovially antagonistic relationship between Bruce and Alfred (even if Alfred does sound really weird in the pre-Efram Zimbalist days), Harvey Bullock's distrust of Batman--even Harvey Dent as the District Attorney and the first taste of the animal transformations that would become something of a motif for the series.

The story is a relatively simple one, and honestly a somewhat strange choice for a first episode. Man-Bat is a fairly minor villain, and only shows up once more in the series' entire run, as I recall. On the other hand, what this episode lacks in intricate plot and iconic battles, it makes up for by giving us a very well-rounded introduction to Batman. Not only do we get to see him playing the monster-battling superhero and the clue-analyzing detective, but we also get some great scenes of the bumbling playboy (and the genius who can use that persona to great effect), the fugitive vigilante on the wrong side of a tenuous relationship with the law, and the antidote-concocting super-scientist. While this episode doesn't do much to introduce the viewer to Batman's rogues gallery, it gives a fantastic introduction to Batman himself.

The episode is still just a little rough around the edges, as you might expect from a first episode (I hesitate to call it a "pilot," because I think it technically wasn't, and I can't call it a premiere, because it wasn't the first episode aired, so "first episode" is the best I have). One of the most jarring scenes is when Danny Elfman's Batman theme makes a prominent appearance, which seems somewhat out of place among the rest of the Shirley Walker orchestration. Obviously, that problem--if it could even be called that--would be worked out quickly, as evidenced by the series' amazing soundtrack. To date, I have a hard time thinking of any animated series that has had anything approaching music as incredible as B:TAS.

So, overall, a pleasant reminder of that afternoon in 1992, and a fantastic taste of the series' potential.
Posted by Tom Foss at 10:32 PM

Thats awesome, I can nearly remember watching those very first episodes myself and slowly getting drawn in making sure I caught every following episode.