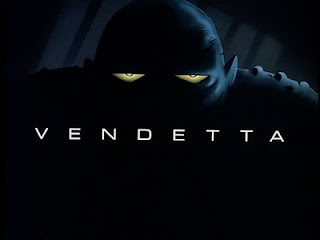 In looking at my Batman: The Animated Series DVDs for episodes to review, I've found it interesting what my initial judgments are upon reading the titles. For a lot of the episodes, I think "Oh man, that's a great episode"--"Almost Got 'Im," "Heart of Ice," and so forth. For a few, I think, "jeez, that was a bad episode"--"Christmas With the Joker," "Heart of Steel," etc. And then there are some that make me scratch my head and wrack my brain to remember what the heck they were about. "Vendetta" was one of those episodes, so I decided to cure my curiosity--plus, it's on the same disc as "The Clock King."

As it turns out, "Vendetta" is the introductory episode for Killer Croc. It's interesting, in that the plot turns mostly on the sorts of plot devices you'd find in a police procedural, not a children's cartoon. At the beginning of the story, a convict is getting paroled early for agreeing to testify against Rupert Thorne. Unfortunately, the boat he's traveling on is bombed, and he appears to have died--leading to the only use of the phrase "draggin' the bay" (as in, to search for a body) I know of in children's television. Gordon takes Bullock off the case, in order to prevent conflict with Internal Affairs, since in the past Bullock was accused of working with Thorne. Ultimately, someone frames Harvey for the crime, as well as the kidnapping of Joey the Snail.

I was frankly a little shocked to see terms like "Internal Affairs" get tossed around in a cartoon, especially without any explanation.

Anyway, Batman's role in this is mainly to investigate around the periphery of the plot's main events. At first, the evidence seems to implicate Bullock, and Batman is perhaps a little to eager to accuse the police force's biggest Bat-detractor. Eventually, though, Batman finds a scaly bit of flesh at one of the crime scenes, and--thanks to Alfred's fortuitous discussion of cookware--deduced that it might be from a "croc." Bruce then goes to the zoo, where a helpful recording outside the crocodile enclosure explains that crocodiles live in underwater caves.

Seriously. Batman goes to the zoo. To do research. On crocodile habitats. Unless the zoo is next door to Wayne Manor, I can think of about ten different ways that he could have done that research more quickly and efficiently, and thus less ridiculously. Are you telling me that nowhere in stately Wayne Manor is there an encyclopedia? The Bat-computer database doesn't contain anything from Zoobooks?

Naturally, Batman rescues the criminals, gets beat up a bit by Killer Croc, and eventually clears Bullock's name. The episode is not bad, and surprisingly enough the worst bits in it are the ones with Batman and Croc doing superhero/supervillain stuff. Croc's self-exposition is painful at best, and Batman goes to the zoo. The police procedural parts are great, though, and Bullock really shines.

The other really surprising aspect of the story is how intelligent Croc seems. While the series sometimes plays the character for comic relief, the Croc-centric episodes (this and especially "Sideshow") show him to be a relatively bright guy. Here, he's successfully able to impersonate and frame Harvey Bullock, which is not the easiest thing for a giant reptile-man to do.

It's not one of the greatest episodes of the series, and it has some silly moments, but overall "Vendetta" is a pretty good story. I don't think I'll be forgetting it again anytime soon.
Posted by Tom Foss at 9:29 PM

It's been a while since I watched Batman:TAS, but I had something strike me when reading your post.

It was the memory of thinking that Batman had suspected a zoo handler, specifically one who dealt with crocodiles. Which made him going to the zoo make perfect sense to me.

After all, as Bruce he went to someone who studied bats to find out about the Bat-man.

It's probably because I did not know anything about Killer Croc up till then. Hmm I need to rewatch it and see if it jogs my memory more - if I thought he thought someone who spent a lot of time around crocodiles might utilize their survival MO and related it to the crime scene.

The other really surprising aspect of the story is how intelligent Croc seems. While the series sometimes plays the character for comic relief, the Croc-centric episodes show him to be a relatively bright guy.

It goes double for the comics (as no doubt you know). Most of the time, Croc is played as a simple animal, but in his first appearance back in the '80s, he was a skilled manipulator who brought Gotham's underworld to its knees. In fact, reading that story arc, I got the impression that they stole the whole plot for Bane and Knightfall.