December with the Doctor: "Dreamland" 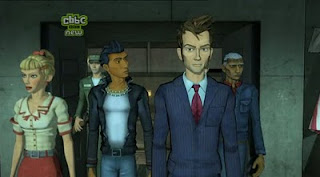 A few days ago, I watched the new Doctor Who animated adventure, "Dreamland." And I must say, it was a pretty good audio drama.

The video, on the other hand...

It's a shame, because there's a lot to like about "Dreamland." The story is set around Roswell in 1958, which means the whole thing centers around the typical American Roswell/alien mythology. There's something particularly interesting about seeing such a thoroughly British show tackle such a thoroughly US-centric myth, and I think the "Doctor Who" sensibilities bring a different flair to this otherwise well-worn territory.

So, all the usual pieces are present: the Roswell crash, flying saucers, the Men in Black, Area 51, gray aliens, a military cover-up of alien visitations and alliances, a distrustful and belligerent Army leader, the Cold War, even Native Americans and a '50s diner. There are some interesting twists: the MIB are alien robots, the Army is allied with one faction of aliens against another in a plot to wipe out the Soviets, the belligerent Army leader is in league with the evil alien bugs in order to wipe out the Soviet threat, etc. The Doctor brings a lot more running and talking to a story that would traditionally be focused on technobabble, explosions, and violence, so that's a nice change of pace.

And the pacing works well, too. The story was broken up into six-minute chunks for a total runtime about the same as a typical episode of the new series. That format kept the story moving along at a good clip, with plenty of compression.

The best thing about it, though, is the central conflict/Macguffin. The gray aliens were at war with the insectoid Viperox, and had developed a biological weapon to wipe out all of their enemies. The Viperox, naturally, are after that weapon, which was lost in the Roswell crash. The Americans assist the Viperox, because the bugs have promised to alter the weapon so it kills off all the Russians. And finally, the Viperox are reproducing underground to invade the planet. All this--plus a little romance plot--comes together quite well. Not only that, but all the American accents are convincing (though Georgia Moffett's meanders occasionally). Take that, Peri. 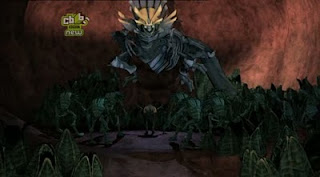 Really, the only thing to dislike about "Dreamland" is the animation. The stylization isn't bad, but the stiffness is. It's fine for the aliens--who look incredible--but as soon as humanoids start talking or emoting or running, the stiffness and awkwardness really sticks out. "Beast Wars" had better animation a decade ago; there's really no excuse for this.

Overall, "Dreamland" is worth a listen, and it's nice to have this kind of story that would be difficult to do on a BBC budget--big, inhuman aliens, non-British settings, etc. Just don't look at it too closely.

Labels: December with the Doctor, Doctor Who, Reviews